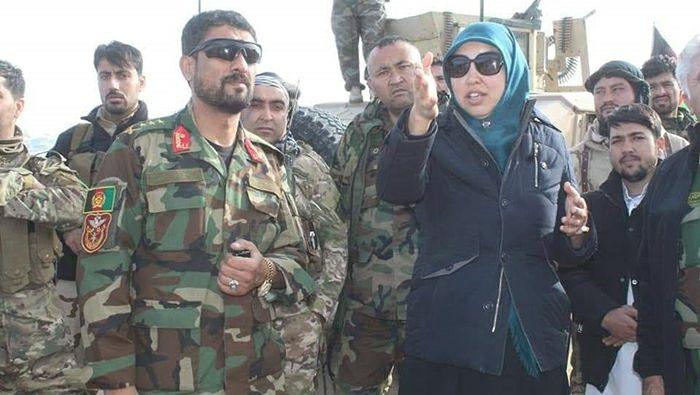 Salima Mazari, in a company of men security forces , pointing at some point or thing

Salima fights on frontline against Taliban and corruption

The 39-year-old Salima Mazari, who is a district governor, fights on the frontline against the Taliban and corruption. She has many plans for developing Charkint district of the northern Balkh province.

In 2011, upon her return from Iran Salima settled in Mazar-e- Sharif. As a teacher, she joined private schools and university. Born and raised in Tehran, she completed her education majoring in sociology at Kharazmi University in Tehran. She is married and have three children.

In the 2018 as she was working on a social project on Amo River, she was introduced to many government officials in different ministries. With the encouragement of one of the government officials, she was asked to apply for governmental position and referred to the Independent Administration Reform and Civil Services Commission (IARCSC). District governors’ positions for nine districts of Balkh province were announced and Salima enthusiastically decided to apply for post of district governor in Charkint district, a district she originally comes from. Many times the position for this district was removed and re-anounced, but Salima didn’t give up. Out of 145 applicants for the nine districts, 25 had applied for governing Charkint district. Salima got the highest score among rival candidates. Some of the participants even bribed higher authorities to get shortlisted.

The day Salima traveled 40km south to Shar Shar, Charkint district, neither her nor her male colleagues felt well about Salima. Crossing destroyed roads, seeing muddy houses without water and electricity, deprived people living in high mountains and an office whose walls were collapsing left no room for a sense of wellbeing. Likewise, having a female leader as district governor was something new and male staffs were not used to.

Many male colleagues of her looked down at her, taking her as inexperienced woman who may not be able to work in a man-dominated environment. Salima felt depressed, hopeless, and was under mental pressure, she thought that she wouldn’t survive long at man-dominated situation. Officers would only show up once in a week to sign their attendance and for the rest of the week, the office door was closed. Salima started from the scratch. Without any of her colleagues helping her with her office works, she started to learn about the traditional work of the Afghan administrative bureaucracy. Gradually, two of her colleagues started helping her out while the rest were not good to her.

“When I started my work, they left behind their works. This also encouraged them not to cooperate with me. The moment I realized it, I moved on and when I asked them to finish a task and they wouldn’t do it, I would finish it myself.”

When Salima was newly hired, corruption had raged all the district starting from police, security, to education and health, she says.

She worked hard with each sector to reduce and remove corruption. According to her, people’s problems were not addressed. Many times, police commanders and the security managers were changed, and their cases were referred to prosecutor’s office. However, without their cases being sued, the officials were changed from one district to another. In education sector, there were many inactive schools, but the salaries of the teachers were paid each month. She succeeded in changing the head of education sector in Charkint district and introduced the corrupt employees to the prosecutor’s office.

After doing research on how to improve economic situation of the district, Salima found out two ways: Water management to boost up horticulture and agriculture and to develop the district into attraction sites for tourists and starting small businesses. To that end, 12 water dams, roads, and some electricity generating projects are currently planned.

“Despite of not being interested to go to war and directly fight against the Taliban, I had no choice. When neither my commander nor the security manager support the local people, I had to go and stand for them,” says Salima.

In 2019, the Taliban planned to expand their activities in all the districts of Balkh province. First they started to talk with the local elders and encourage them to let the Taliban communicate in their areas without creating any bloodshed. If the Taliban would be refused in any of the districts, they would start warning the people of that district. This way, the Taliban brought up to 70 percent of Charkint district under their control.

The Taliban would ask people to give them arms, and in case of not accepting, people would be attacked by them. “We would be called by people that the Taliban had taken away their sheep, gun, or beaten them. The issue was not shared with us until then. Unfortunately, our security officials had not taken any action regarding the issue and remained silent.”

Out of 14 districts in Balkh, only two districts of Khulm and Marmal are safe, says Salima. The rest are under the control of the Taliban. According to her, the districts of Zari, Dawlat Abad, Charbolak and Chimtal are all on the brink of collapse.

After one year of working hard, Salima succeeded to attract the government aid and bring local police in the district. Although, the Taliban didn’t launch any fight, the level of their threats remain high. “I was repeatedly told that as a district governor, I cannot fight alone. And I told them that it doesn’t matter what others would say, but I never would allow Charkint to be insecure again.”