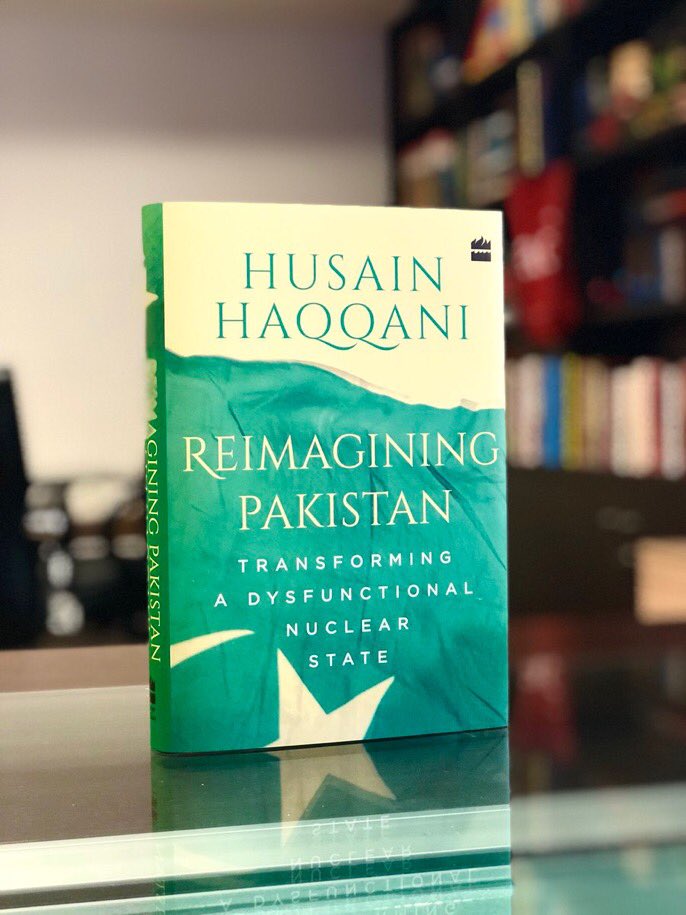 Reimagining Pakistan: Transforming A Dysfunctional Nuclear State is a book written by Husain Haqqani. A qualified Pakistani academic and political activist, Haqqani has served as Pakistan’s ambassador to Sri Lanka and later to the United States of America from 2008-2011. He also worked as a political advisor to the former prime ministers, Nawaz Sharif and Benazir Bhutto. For the time being, Mr. Haqqani lives in exile in the US and serves as a Senior Fellow and Director for South and Central Asia at the Hudson Institute.

His book, Reimagining Pakistan: Transforming A Dysfunctional Nuclear State, first published in April 2018, offers an eye-opening information about Pakistan. Unique in his argument, Haqqani challenges the official narrative of history of Pakistan, the Pakistani state and notably the Pakistani army. He calls for a bold re-imagination of the state of Pakistan after facing failures in several fronts.

One such front that worked more to the harm than good of the infant state of Pakistan after partition from India was a process of Islamization. According to Haqqani, the founding fathers of Pakistan, namely, Muhammad Ali Jinnah and Liaquat Ali Khan, though were British-educated secular leaders, they struggled for a pro-Islamic Pakistan even before the nation’s birth in 1947. Islam as identity, as Haqqani puts it, served as the only potent identity card for an ethnically diversified Pakistan to identify itself against a Hindu majority India. At its inception, Pakistan was composed of the Bengalis in the erstwhile East Pakistan, and Punjabis, Sindhis, Pathans, Balochs and Muhajirs in West Pakistan. In order to suppress ethnic nationalism and to avoid reunification of Pakistan with India, these secular leaders deliberately took a path to Islamize Pakistan. However, this ideological nationalism resulted in exacerbating religious sentiments, gave rise to violent extremism and terrorism, moreover, it also failed to shape a widespread national identity acceptable to all. Haqqani argues, “The Bengalis (after the creation of Bangladesh) had proved that ethnicity and demands for a rightful share of the country’s resources was a stronger factor in determining their nationalism than Islam” (p. 96).

Another such front that has harmed the democratic as well as developmental efforts in Pakistan is the presence of an over-dominating military. Haqqani traces the dominance of the Pakistani army to circumstances in which Pakistan was born.

The disciplined and well-organized structure inherited from the British Indian army, as opposed to the other idle state institutions, coupled with real or perceived dangers from India, internal revolts and also from Afghanistan with its “claim to Pakistan’s Pathan territories” helped the Pakistani military to make its presence dominate over national arena of the country’s national politics and economy and foreign policy.

A thorough reimagination of the state of Pakistan, Mr. Haqqani says, is better for sustainability.

A sense of insecurity has, as Haqqani argues, established Pakistan as a national security state where the army, with an iron fist, rules the process of state crafting, foreign policy and home affairs politics. Over nearly last four decades military rules have resulted in a more than thirty years of direct rule by army generals (3 military coups) in Pakistan’s short lifespan of over seventy year. Even in democratically elected governments, the military is the one calling the shots from the back. Thus, the behavior of the army as a “back-seat driver” has resulted in the weakening of the civilian institutions, undermined the democratic process, poor civil-military connection, and strained relations with neighboring countries. The economy is another such front where Pakistan failed to mark its meaningful presence and which requires a fundamental reconceptualization. Haqqani blames the unimposing economic performance of Pakistan, as compared to Bangladesh and India, to several, often related, reasons. First and foremost, the civil-military strain has kept Pakistan from realizing many of its economic capabilities. Additionally, Pakistan is described as a rent-seeking state which has used its critical strategic location as a resource for absorbing foreign aid and thus evading indigenous development. “Thus, ‘weak civilian governments vying for popularity, and military governments without political support seeking legitimacy’ sought external assistance and political support, and avoided critical reforms,” quotes Haqqani. Pakistan’s unnecessary obsession with India has further aggravated its economic trouble; instead of improving trade relations with India, Pakistan’s hostility towards India has helped maintain an expensive military and support jihadi terrorist organizations. Haqqani suggests that instead of acting like a nation of warriors in need of conflict, Pakistan can build a relationship, like that between the erstwhile opponents of Belgium and the Netherlands, with India. Regular trade ties with India can be a source of economic and political development in Pakistan as well as the whole region.

A thorough reimagination of the state of Pakistan, Mr. Haqqani says, is better for sustainability. He calls for a reasonable contemplation on Pakistan’s existence as an ideological state, military’s role in shaping the public policymaking, the economic priorities, and bilateral ties with India. Pakistan’s strategic location, and its influential political presence in the region, especially for Afghanistan and India, makes the reading of this book ever more important and exciting.

Other books by the author include: Pakistan Between Mosque and Military, Magnificent Delusions: US, and Pakistan and an Epic History of Misunderstanding, and India v Pakistan: Why Can’t We Just Be Friends?