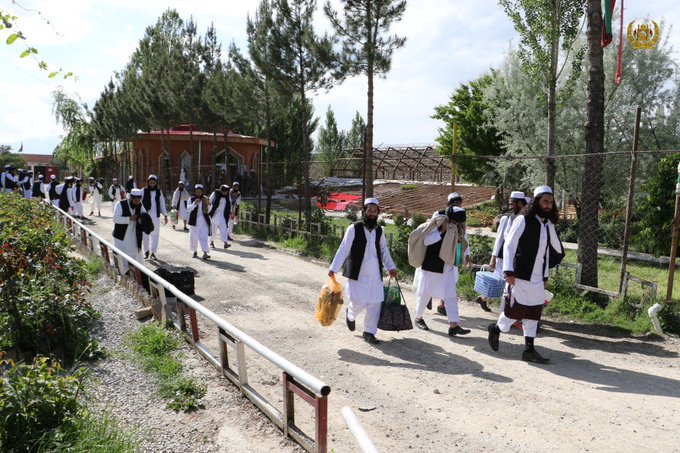 The Afghan government and the Taliban have exchanged hundreds of prisoners after a surprise ceasefire announcement during the three days of the Eid al-Fitr by the Taliban. The prisoners’ exchange, stipulated in the US-Taliban agreement, was halted for a short time due to a drastic increase in violence by the Taliban across the country.

To welcome the Taliban ceasefire announcement, President Ghani issued a decree ordering the release of 2,000 Taliban prisoners during Eid al-Fitr days. He also asked Afghan forces to refrain from offensive attacks against the Taliban. Ghani’s decision was welcomed by the Taliban. Suhail Shaheen, who is spokesperson of the group’s political office in Doha, wrote in a tweet that they will release a “remarkable” number of prisoners of the Afghan government.

Though the Taliban have not commented if they are willing to extend the three-day ceasefire, release of the Taliban prisoners by the government was aimed at extending the ceasefire and paving the ground for start of intra-Afghan talks with the militant group.

However, spokesperson for Office of the National Security Council (NSC), Javid Faisal, said in a tweet last Friday, May 29, that the détente continue despite scattered incident to the contrary. “A ceasefire is a complex operational undertaking that requires significant and ongoing coordination to avoid incidents. Those efforts will continue,” he added. His remarks on continuation of the ceasefire was made a day after the Taliban and Afghan government confirmed that a technical team of the militant group was in Kabul working with the government team on release of the prisoners.

In response to the government move, the Taliban released a total of 153 prisoners of the Afghan government on Thursday, May 28, and on Saturday, May 30, from the detention centers run by the militant group in different provinces.

Another setback against Taliban

In a tweet posted today, May 31, Mr. Shaheen confirmed that a total of 2,284 prisoners of the Taliban have so far been released by the Afghan government. Rejecting the release of more than 2,700 Taliban prisoners, the Taliban spokesperson urged for publishing “accurate and real numbers” in order not to disturb the process.

Having released more than 1,500 Taliban prisoners before start of intra-Afghan talks – against Ghani’s own phased plan – marks another setback by the Afghan government in the peace process in a bid to convince the militant group for direct talks. Previously, the Afghan government, under pressure by Washington, crossed its self-defined redlines, including release of Anas Haqqani, who was sentenced to death by Afghanistan’s Supreme Court. Such setbacks are widely seen as major factors that will significantly weaken the government’s position in direct talks with the Taliban.

“By releasing 5,000 prisoners in one fell swoop, Ghani would be surrendering the most powerful tool of leverage at his disposal,” Michael Kugelman, senior associate for South Asia at the Woodrow Wilson Center, was quoted by Aljazeera as saying in a piece published on March 11, 2020.

Despite the continuation of ceased violence as what was termed by Afghanistan NSC as “détente” sporadic attacks by the Taliban and attacks by unknown sides have also occurred in different parts of the country, including in the capital Kabul, since last weekend.

Deputy spokesperson for the Ministry of Defense, Fawad Aman, has said that the Taliban militant have killed 14 Afghan border forces in Dand-e-Patan district of the eastern Paktia province on Thursday’s night, May 28. He added that three other border forces were wounded in the attack.

Three children were killed and four others wounded in crossfires erupted between Afghan security forces and the Taliban insurgents on Sunday, May 31, around 12:00 p.m. in Nerkh district of Maidan Wardak province, according to Abasin Sarwari, district governor of Nerkh district. It’s not clear yet that which side has committed the violation of the ceasefire. Media office of the province governor told in a statement that a 10-member delegation has been assigned to probe the case.

On the other hand, two employees of a private television network, Khurshid TV, were killed on Saturday, May 30, and four others were wounded when their shuttle was hit by a roadside bomb in the capital Kabul. Confirming the incident, Marwa Amini, deputy spokeswoman for the Ministry of Interior said that the death toll could rise.

Though the Taliban rejected involvement in the attack, the Islamic State Khurasan Province, claimed responsibility for the attack.

In the meantime, Abas Kamyar, spokesperson for governor in the central Daikundi province, today, Monday, June 01, confirmed to Kabul Now, that two Afghan security forces were killed after their outpost in Kijran district of the province came under attack by the Taliban fighters.