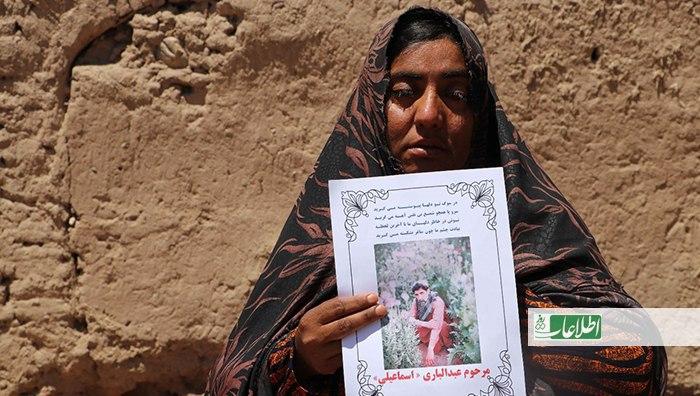 A female relative of Abdul Bari, the victim who was drown into a river, holding victim's picture in Herat, Afghanistan
KabulNow·May 7, 2020

‘They were laughing at us’, says survivor of mass drowning by Iran’s forces

In a mud-made poor house, situated in Tank-e-Mawlawi neighborhood of Herat sad men, wearing forlorn looks, were mourning a death which was allegedly caused by Iran’s border guard on May 02. The 19-year-old Abdul Bari, who escaped poverty to earn a living in Iran, was caught, beaten and drown in Harirud River while he was illegally crossing into Iran.

Like many desperate young Afghans who escape war and poverty to a fortune in neighboring Iran, Abdul Bari had no option but to pay a smuggler to take him to Iran.

The tragic death of the young Bari has left his entire family in a deep shock. The sad story of Abdul Bari’s death is a sad account of a human crime committed against fellow human being.

“My son had gone to Iran for work and the Iranians killed him,” says Bibi Hura, Bari’s mother.

According to account by Bari’s family, the Iranian Border Guard had tortured him before drowning.  “They beat Abdul Bari to death. I wish he wouldn’t have gone to Iran,” the bemoaning mother says.

Abdul Bari would sell puffed corn snacks on a wheelbarrow in Herat before the city was placed in lockdown. With the lockdown imposed on city, Bari, who was the only breadwinner of his family, lost the only source of his income—finding himself forced to leave for Iran.

Since there was nothing left in the house to eat, Abul Bari along with some of his friends, decided to go to Iran for work, said his aunt, Bibi Gul. “Abdul Bari’s friends called us on Saturday and asked us to go Kushk-e-Rubat Sangi. My brother went and returned with Abdul Bari’s dead body,” she retold the story.

“My son had gone to Iran for work and the Iranians killed him.”

According to her, Abdul Bari was severely beaten before his death by the Iranian border forces. Wound on his corpse was bleeding when they buried him, says Ms. Gul.

On May 02, cellphone photos leaked to local media outlets showed a number of wet corpses taken out of a river. The photos of dead Afghans shocked the nation. Rights watch and activists condemned Iran for such an inhuman act. The Afghan ministry of foreign affairs announced that it would undertake a probe into the killing. Iranian diplomats in Afghanistan refused Iran’s border guard’s hand in the killing but later on May 05, a statement by the Afghan ministry of foreign affairs said that Tehran had vowed to undertake a joint investigation into killings of Afghan migrants. According to initial reports, more than 20 Afghans, who were crossing into Iran, were killed by Iran’s border guard.

The victim family calls for justice. They urge the Afghan government and international rights organization to launch an investigation into killings of Afghans in the hand of Iran’s border guard.

Those who have survived the killing give a sad account of a human suffering. The survivors of this deadly event say that they were detained by Iranian border guard as they crossed into the country’s territory. The Iranian border guard beat them hard, truck them to the border point and ultimately throw them into a river at gunpoint.

“The Iranian border forces asked me why I had entered Iran. I answered for ‘hunger.’ Then they told us that we would be shown what hunger was. They took us to the river side and fired some bullets, threatening us to jump in the river. We beg them not to force into river but they did not accept,” Hamidullah, an Afghan who has survived, says. “Only seven or eight people swam out of the river,” he recalls.

Karzai, another Afghan who has survived, says that the Iranian forces were enjoying and laughing while the Afghan migrants were drowning and struggling to survive. “The Iranian border forces were not Muslims. If they were Muslims, they wouldn’t have committed such a brutal crime. We were drowning in the river and they were laughing at us,” he stated.

According to eyewitnesses, of those 50 migrants, 23 were missing. Five dead bodies were transferred to Herat provincial hospital on Saturday.

The Iranian forces were enjoying and laughing while the Afghan migrants were drowning.

“History will not forget”

The incident was followed by huge national and international criticisms and public outrage among Afghan social media users. Footages taken of the dead bodies of the victims took twitter and Facebook by storm, with extremely outrageous comments about the alleged harsh treatment of the Iranian border guard. Most of Afghan social media users described the incident as brutal, inhuman, and barbaric, calling on the Afghan government to probe the case. They have launched a hashtag campaign in Persian “Koshtar-e-Harirod” literally means Harirud mass killing and #HarirudMassacre in English.

“They had come by foot to earn bread for their children. The neighbors drowned them. History will not forget,” Sediqa Zaki, wrote on her twitter.

“No one leaves home unless, home is the mouth of a shark, you have to understand that no one puts their children in a boat, unless the water is safer than the land,” Roya Haidari, an Afghan filmmaker and photographer, posted on her social media account.

Moreover, a number of Herat civil society activists and residents took to the street and protested against the deadly incident alleged to Iranian border guards.

“The Iranian border guards and its forces have committed crimes against Afghan migrants the time and again. This needs to be stopped,” said Sayed Ashraf Sadat, a civil society activist.

The protesters asked the Iranian government to pay ransom for families of the victims.

Mohammad Haneef Atmar, the acting Afghan minister of foreign affairs, in a twitter ost, described it as an “unforgivable crime”. He vowed that the Afghan government, with full capacity, would undertake a probe.

The US has denounced the alleged torture, drowning, and killing of Afghan migrants as “appalling” by Iranian guards. “We encourage the Afghan authorities to undertake a full investigation and to seek to hold those perpetrators accountable,” US Secretary of State Mike Pompeo said Wednesday at a news conference.