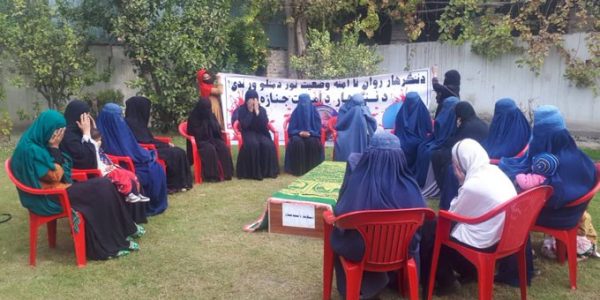 Afghan women march with mock coffin of ‘security’ in Nangarhar

To protest against recent insecurities in the eastern Nangarhar province, a number of women and civil society activists, in a symbolic move, carried a mock coffin of “security” on Monday, December 09.

In latest series of deadly attacks in the province, a top Japanese aid worker and an honorary Afghan citizen, Dr. Tetsu Nakamura, was shot dead along with his five Afghan colleagues on December 04 in Jalalabad, the capital city of the province.

Without providing more details of the protest, Farid Khan, spokesperson for the police chief of Nangarhar province confirmed the protest rally of Nangarhari women.

To praise the decades-long services of Nakamura, who headed the Peace Japan Medical Service, President Ghani awarded him honorary Afghan citizenship in April 2019.

His death drawn huge national and international condemnations as Afghans widely shared sorrows and condolences with his family through their social media platforms calling Nakamura a true hero for Afghanistan.

Later on, in an implicit point out to Pakistan, Nangarhar governor said that the attack on Nakamura was plotted outside Afghanistan, mainly for his effective efforts in controlling the flow of water in Nangarhar.

While accompanying the coffin of Nakamura along with his family members to Hamid Karzai International Airport for flying to Japan, President Ghani pledged that Afghan security forces will bring perpetrators of the attack to justice.

On the other hand, a Taliban truck bomb targeted a military base of Afghan military forces in the southern Helmand province killing five soldiers and wounding four others, according the Ministry of Defense.