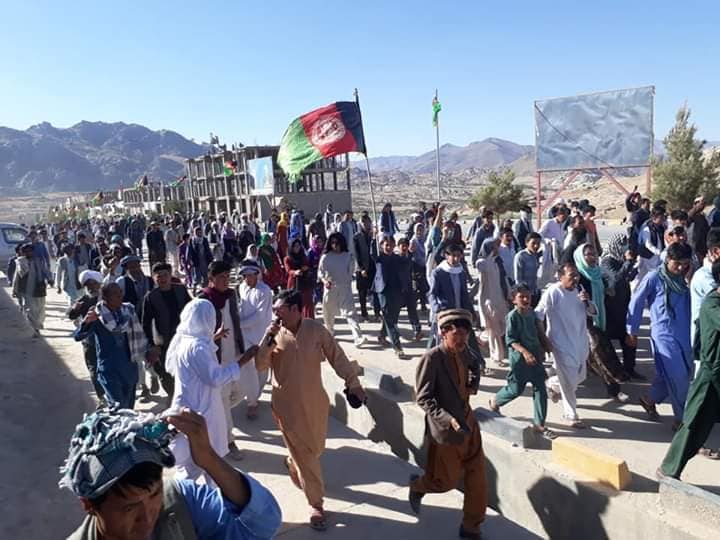 Governor awarded ‘certificate of shame’ as Daikundi gets insecure

In the attacks, approximately 120 people have been killed and wounded—mostly Afghan security forces, according to Haji Ghairat Jawahiri, a member of Daikudi PC.

Protesting against recent insecurities and government’s failure to end Taliban’s attacks, a number of civil society activists along with members of Daikundi provincial council held a rally on Saturday, August 03 in Nili, the capital of the province. The protesters underlined that ignoring the threats posed by the Taliban, local officials— in particular governor of the province, Sayed Anwar Rahmati— were busy campaigning for 2019 presidential election.

Rahmati, however, described the protest as a unilateral move, saying that in regard to insecurity in the province, he had taken the high ranking security and defense officials on board. “Our civil society institutions are occasionally used by the politicians,” the governor accused the protesters.

“Our forces have the best defensive facilities in Pato district,” he noted, adding that Taliban’s casualty toll was twofold of what had inflected on the Afghan security forces in latest attack on the district.

Esmatullah Ahmadi, 35, is one of the dozens of people who were forced to flee their homes and leave their live stocks behind as the result of attack by the Taliban. He said that almost 1800 displaced families were temporarily settled down in Nili and other neighboring districts.

Ahmadi added that at least 70 security forces were killed and wounded, and more than 10 civilians lost their lives since the beginning of Taliban’s offensives in the district.

“The people are in very critical situation. All connecting roads of Kijran district are blocked,” he stated, warning that the district would definitely fall to the Taliban if the government did not take immediate action.

In Pato, a district bordering the southern Uruzgan province, the Taliban killed as many as 10 security forces and wounded 15 others in the last two days.

Meramoor, another district of Daikundi bordering Ghazni province, is the third district which has recently come under sporadic attacks by the Taliban.

Rohullah Ahmadzai, spokesperson for the Ministry of Defense, said that the Afghan defense and security forces were stationed in their bases in the districts.

Jawahiri, however, warned that Kijran and Pato districts were still vulnerable and the Taliban could again wage attacks on the districts. He accused the central government of not doing enough to suppress the Taliban. “The [aircrafts] just patrol, they have not targeted the stronghold of the enemies.”

He believes that the Taliban group launched attacks on Daikundi to gain leverage in peace talks currently undergoing in Doha, Qatar.Holding a protest rally on Saturday in Kabul, a number of civil society activists along with MPs from Daikundi called on the government to take immediate action against Taliban’s attacks on Kijran, Pato, and Meramoor districts. They urged the security officials to conduct ground and aerial operations, clear the districts from the presence of the Taliban, and establish a permanent military unit in the province.