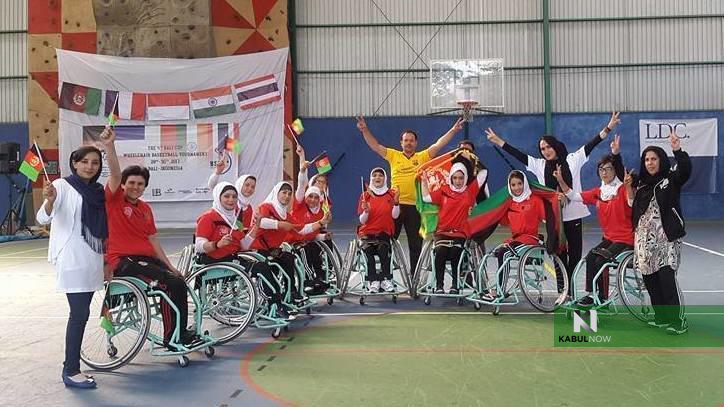 Nilofar Bayat, captain of Afghanistan’s women wheelchair basketball team, lost of her leg in a rocket launch during the Taliban regime in Kabul. Bayat, then 2 years old, was sitting with her 14 years old brother by the window when a rocket launch hit the ground of their house that killed her brother and left her with life-time disability.

“I was in hospital for one year and had several surgeries,” said, the now 24 years old Bayat.  “As I lost my feet in my childhood, I don’t know how it feels like walking.”

Captain Bayat’s disability did not stop her of pursuing her dreams in a country where thousands of people with disability are neglected by society. In 2010 when the International Committee for the Red Cross (ICRC) initiated to sponsor a wheelchair basketball team in Kabul, as many as 200 Afghan girls with disability including Nilofar Bayat joined the team to start a new life.

Following the establishment of women wheelchair basketball team, in 2014, as many as 14 girls were selected to play for Afghanistan’s wheelchair national team that so far has contested three matches in abroad to bring medals back home. In 2017, the team won its first championship at the 4th annual Bali Cup International Tournament in Indonesia. It played against women’s teams from India, Indonesia, and Thailand, kicking them one by one out to win the championship.

“It is hard to carry on with disability,” says Bayat. “But in Afghanistan it is a pure misery when you are a girl with disability.” Bayat works with ICRC, and supports her family.

Wiping off her tears and gathering her courage she says, “I am proud of myself.” “I am focusing on my goals, rather than overthinking about my disability,” she added with assured sign of self-confidence on her face.

The captain and her team play, wishing to qualify for next year’s Paralympic games in Tokyo, another test they want to win. Every Thursdays and Fridays, they get on their wheelchairs, forget their disabilities for hours, and do exercises. The team’s laughter echoes, as ball flies through their hands. For all of them basketball is not only a game, it is a meditation they try to keep their lives up with.

But their laughter fades away when they speak their disabilities. “I stand for hours in roadsides, waiting for public transportation to pick me up,” says Fatima, another national wheelchair team player. “My mother does not understand me, and my younger brother does not respect me just for I am a girl with disability.”

Fatima, now 26, was born with disability in Iran. “In my childhood from dawn to dusk, I was sitting in a corner of house, watching my siblings move around and see other family members go out whenever they wished,” she says, as tears poured down her cheek. “Sometimes I beg God to take my life, and ask Him why me”

The sad thing, however, is that the number of population with disability is on rise in the country as the ongoing conflict takes lives and leaves injured on and off. Decades of war, suicide and roadside bombings coupled with polio disease, traffic accidents, use of harmful medicines by pregnant mothers during pregnancy period and inter-familial marriages add to number of population with disability.

According to ICRC, 2,000 wheelchairs and 22,000 prosthetics were donated last year. About 1.5 million people—or one in 20—lives with some kind of physical disability in the country.

People call them not by their names but by the defects disabilities have left on them, and family members often consider them as “shame” on faces of family members. Many of them feel direct neglect by family and parents, and most shockingly some in Afghanistan see disability as a punishment cursed by God on people with disabilities.

Many of people with disabilities are not able to get married. They are deprived of their very basic human needs and social spaces.

Farhnaz Bahadari, 18, is another wheelchair basketball player. She was injured in a traffic accident and lost use of her leg when she was three. Growing up with disability, Bahadari has fallen in love with a boy of a neighbor family. “I couldn’t tell him, I loved him,” said Bahadari. “He got married and I was upset.”