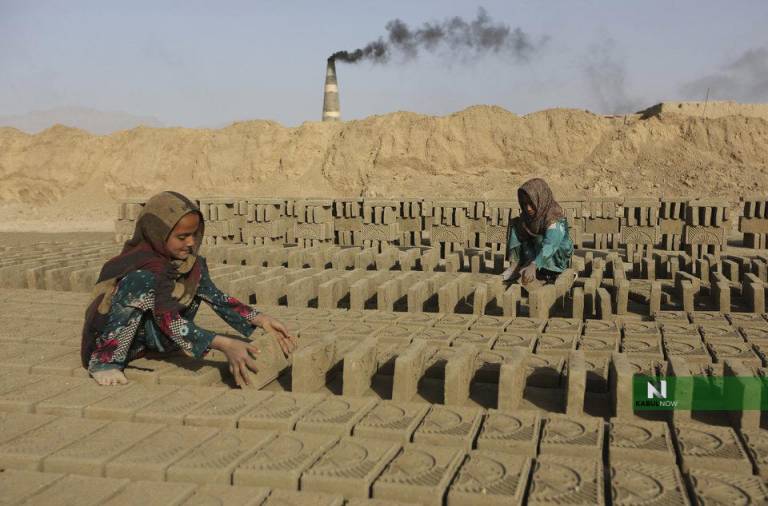 Kiln smoke is a serious threat to environment

Nearly ten kilometers away from the capital, Dehsabz is situated in northeastern suburb of Kabul. It is a district with growing population of estimatedly 150,000 people, living in 44 villages. There are a number of brickkilns in which thousands of workers work with many travails although the district is neither proper for agriculture nor it is an industrial district. Etilaat-e-Roz’s Hamid Farhadi has visited the district, and he has brought up stories of how hardly brickkiln workers work to survive, and how smoke produced by kilns changes the face of the area.

Leaving his home in Balkh province, Juma Hassan after days of roaming around in Kabul in search of labor finally gets a job in a kiln in Dehsabz. He describes his new job as a “hard labor” but feels happy of being able to win bread for his family. “During summer days working here looks like [working] in hell,” he said as he wiped away sweats pouring down his forehead. More than 90 other labors are also working along with Hassan in the same kiln.

Nooranshah who along with his family left Nangarhar two years ago, is working in a brickkiln in the district. He lives with his family there. Noor earns 5,000 – 7,000 AFNs on weekly basis. He receives 350 AFNs in return for backing 1,000 bricks.

Jannat Gul Mujahid, head of craftsmen in Dahsabz, says due to slow down in business of brick, only 250 brickkilns, out of 450, are currently operating in the district. He says that labor market is not booming as it did previously. “Construction work has decreased as the result of shrinkage in investments,” Mujahid added. He further noted that around 45,000 people were previously working in kilns in the district but the number has currently dropped to a half.

There has been a significant decrease in the labors’ wage as Juma Hassan and Nooranshah receive half of the stipend they were paid last year. Most laborers, working in Dehsabz kilns, are residing there and majority of them come from Nangarhar, Balkh, Kunduz, Kunar, Parwan, and Laghman provinces.

“10 to 15 people, seeking work on a daily basis, come, and ask us for jobs. They say they would do any work, if available,” says Zewar, a kiln owner.

There are some children, unkempt and deranged. They do labor with Nooranshah. Bilal who is nine years old, comes to kiln to collect cokes and take them home on daily basis.  He kept silent and wobbled his head as sign of refusal when I asked him whether he went to school or not.

Most children living in the area cannot attend school as they are bread winners of mostly extended families. Surrounded by children who were willing to talk, I asked them what their dreams were. “We want peace,” all responded in a single rhythm of voice. I was surprised when in response to “what is peace,” Bilal replied the “absence of the Taliban.”

Providing employment opportunities for thousands of people, brickkilns in Dehsabz are said to be one of the major causes behind air pollution clouding Kabul. According to environmental experts, coals contain Carbon Dioxide (CO2), and other pollutants which are extremely harmful for public health.

Dehsabz residents are in grieve concern over the consequences of pollution caused by excessive use of coal in kilns. Safiullah, a resident, criticized the government for not paying attention to the danger of pollution.

Hassan Ghulami, an environmental expert, said that coals were not extracted properly and in line with the required standards in Afghanistan, therefore, it produced huge pollution.

He went on to say that facilities producing pollution must not be built close to residential areas, and to stop it certain measures needed to be taken.

The smoke coming out of kilns has even changed view of the district’s sky, showing how much it causes air pollution.

Most kilns are using coals and some of them are using other materials like leather as fuel. Zewar Brickkiln which produces 35,000 bricks on daily basis, consumes 120 to 130 ton coals every week and a thick smoke comes out whenever Abdul Nazar and Karimullah put coals into kilns.

Mujahid underlines that smoke came out kilns is harmful for public health, and it has reduced the productivity their gardens. He however asserts that kilns’ owners are ready to accept any solutions offered by the country’s National Environmental Protection Agency (NEPA) to mitigate harms caused by operations of kilns.

Acknowledging the negative impact of environmental change caused by kilns in Kabul, the NEPA however states that a certain guideline will be prepared to decrease air pollution. Nik Mohammad, chief of surveillance and auditing at NEPA, says the protection agency is planning to push kiln owners to register their kilns and take measure to mitigate pollution.

He underlined that the NEPA had conducted a survey of the kilns in Kabul and prepared a report for the High Commission for Prevention of Air Pollution in which the Ministry of Commerce and Industry was tasked to prepare a guideline for registering and controlling brickkilns’ operation.

The NEPA’s initiative to install smoke filtration devices on chimneys of kilns has yet to be put into action while the agency made the promise last year.

According to Nik Mohammad, pollution produced by kilns in Kabul is a serious threat to the environment.