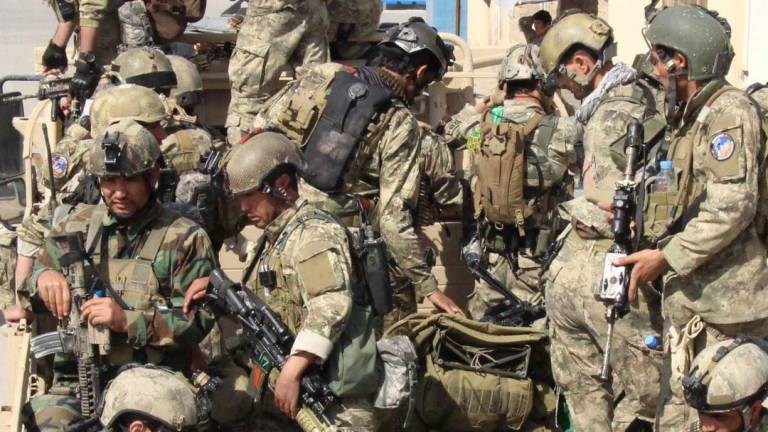 According to local officials, as many as 500 Taliban fighters were involved in Abkamari combat while the total number of Afghan Special Forces dispatched there were 45.

An army official, who refused to be identified, said that the Taliban insurgents set a wheat field on fire to smokescreen the area where the helicopters of Afghan Special Forces were commanded to land.

On July 2, 2019 the Taliban fighters opened fire on the Afghan Special Forces as they stepped down of helicopters in Maida Qol area of Abkamari district of Badghis. They killed Nasir Ali, a commander of special force and brought the rest of forces under fire.

In midnight of July 3, as many as 28 service members of Special Forces were killed and seven others were taken hostage by the Taliban fighters who confiscated all high-tech equipment of the Afghan forces. After a tough combat 11 Special Force service members managed to escape the area and they were rescued by Afghan air force.

Reports say that the Taliban fighters have sprayed acid on faces of dead Special Forces members. A day after the operation, the Afghan air force launched airstrike on stronghold of the Taliban to free the Afghan forces who were taken hostage but the Taliban in retaliation to the strike beheaded seven hostages and handed their dead bodies over to local elders.

He claimed that most likely the Taliban have infiltrated in the Ministry of Defense. “In advance the enemy had information about the operation.”

However Javid Kohistani, a military analyst, says peace talks with the Taliban gives them a leverage to place their men among senior officials in the defense ministry.  “Before conducting operation, intelligence officers should give briefings about the area and about target,” said Kohistani.

Reports say Mullah Noor Aqa, Taliban’s shadow district chief for Abkamari, used to serve the Afghan security forces. Seven years ago, the government forces attempted to arrest him on substantiated charges of smuggling but he managed to escape and joined the Taliban.

Locals say the Taliban control Abkamari district for pure economic interests. They say the area has turned into a hub for smugglers who traffic tree, gun and drug, and the Taliban make billions of dollars out of smuggling.

Najibullah Dadfar, spokesperson for local government in Badghis, said Mullah Noor Aga receives instructions given by Taliban’s Quetta council and sometimes he takes action on commands given by Pakistani fighters.

With collecting ushoor, a 10 percent taxation imposed products and income by Islamic law, Mullah Noor Aqa can easily afford buy night vision rifles. Noor Aqa takes himself as Saddam of the area and forces locals to obey orders given by him, says Abdullah Nikzad, a social activist based in Badghis.