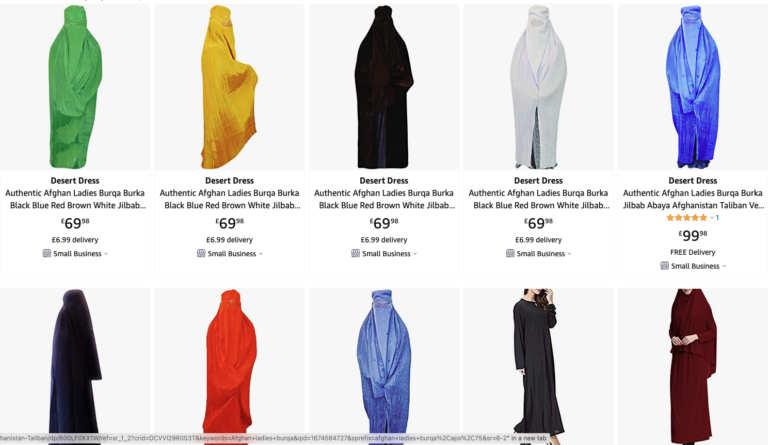 Online e-commerce giant Amazon has been criticised for selling Afghan burqas on its website. Priced at $99.98, they are available in four different colours. Detailed as “Authentic Afghan Ladies Burqa,” “Hide your beauty for that special someone” and “Imported from the Afghan/Pak [Afghanistan/Pakistan] Borders.

The items’ description states that “EVERY LADY MUST HAVE All covering, even the eyes. Afghani Burqa High in Quality, Great in Value Newly Imported from Afghanistan / Pakistan Borders Burqas (burkas) are worn by very conservative women in Afghanistan.”

“Burqa is forced on Afghan women. The Taliban made them universal during their first time in power. You cannot find any woman in Afghanistan who wants to wear it willingly. In Afghanistan, I interviewed many women about wearing burqas. They told me that wearing burqas made them feel as if they were stuck inside of a sack.

“Afghan women are forced to wear burqas in order to keep themselves safe and to protect themselves from the Taliban. Amazon should not be selling them with such misogynistic and sexist item descriptions.”

“Burqas are symbols of oppression for Afghan women, who are being systematically erased from all public spaces by the Taliban. By allowing them to be sold on its platform, Amazon is rubbing salt into the injuries of women and girls in Afghanistan.”