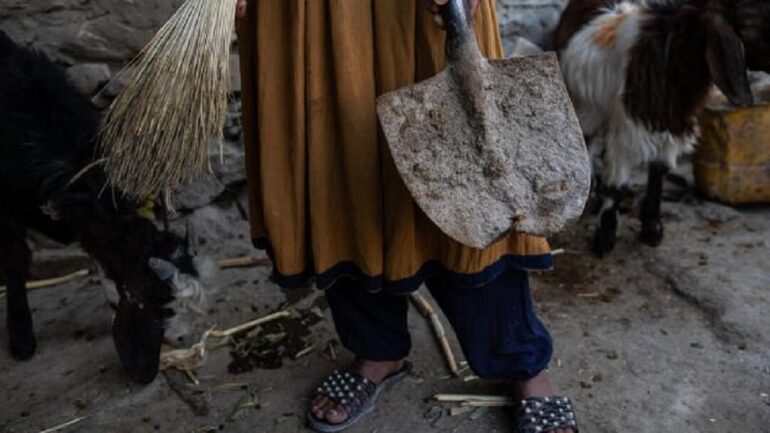 Photo: Save the Children
KabulNow·December 7, 2022

Schoolgirls Transformed into Child Labourers, Reports Save the Children

The ban on girls’ schools above sixth grade in Afghanistan has caused girls to transform from students into child labourers against their will, Save the Children, an NGO aims to improve lives of children based in the UK reports.

The report published on December 5 by the Save the Children says that instead of spending their days reading, writing and learning, the girls now spend their days working on farms or weaving carpets, looking after their younger siblings or the family’s livestock, collecting drinking water or cooking bread.

The organization has travelled across Afghanistan and investigated the impact of the ban on girls’ education.

In the report by Save the Children, Nazaneen, a girl student who says that she weaves carpets and works 12 hours a day.

“From my physical to my mental health, everything is ruined. It’s so hard to concentrate on such a boring and repetitive task for hours and hours and it makes me very upset and depressed,” 16-year-old Nazaneen adds.

Nazaneen adds, “It was a black day when the schools were closed. We had exams but my mother said we couldn’t go to school because they were closed. That was the day my heart broke. Whenever I think about that day, I cry because it was the day that my future and hopes disappeared”.

Nazaneen says she no longer even thinks of her hopes of becoming a doctor. All she thinks about now is her uncertain future. “I really have no idea what tomorrow will bring”, she adds.

Taliban group has imposed severe restrictions, in particular, on girls and their right to education. In August last year, girls above sixth grade were banned from going to schools. This decision by the Taliban followed worldwide reactions. Taliban, on the other hand, say that the group is working on a plan to reopen the schools for girls.