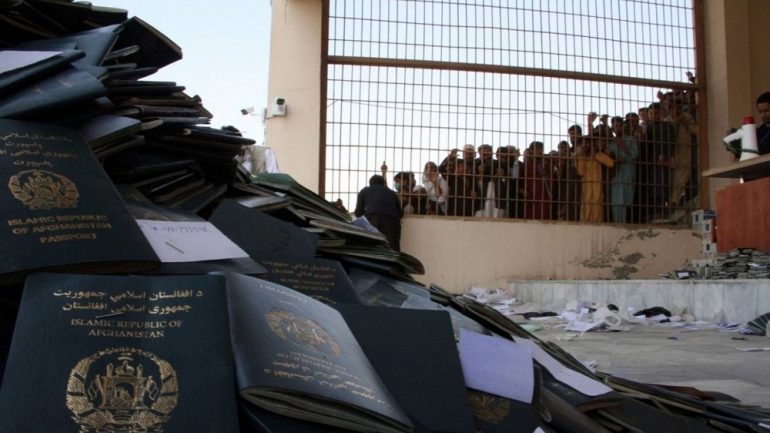 The Afghan Republic [Islamic Republic of Afghanistan], a name, which is associated with discrimination, injustice and corruption by many; namely, the injustice which it carried out on its opponents in terms of bullets, and the corruption that was never alleviated despite the evidentiary documents provided by the media. Recently, the corruption caused by the department responsible for issuing passports made the citizens of this republic raise their voices the most. The passport in question is that of a republic that has secured the lowest ranking in the world—while its citizens have to pay bribes to receive it.

The Taliban government has made an attempt to exhibit a fight against corruption, but this salvo does not seem to apply to the Afghan passport department. According to some, under the rule of the Taliban, videos have surfaced that show long lines of people waiting for their passports and the arrest of Alamgol Haqqani’s brother —the former head of the Taliban passport department—due to his pay-to-receive a passport (aka. commission pay) caused a stir, but apparently, neither the problem of the citizens waiting for a passport was addressed, nor a criminal case was opened for Alamgol Haqqani brother’s private commission related works at the passport department.

In order to understand the existing reality and to know what is happening in the Afghan passport departments under the Taliban administration, I talked to dozens of applicants or those who have now obtained passports through bribery.

The story of all of them  is almost the same: getting a passport on the black market, but now under the Taliban’s white flag.

First, I talked to Malika (pseudonym), a resident of the Qarai region, Almar district of Faryab province. Malika, a young girl, says that her 10-year-old niece was sick and needed to travel out  of the country for treatment. According to her, going to the local passport departments of Faryab province to get help did not work.  And she came to Kabul out of necessity; after days of trying, she got the paperwork done at the Jomhoryat Hospital and the Directorate of Evaluation of Health Laws of Passport Directorate, but according to her, despite trying for two months, she wasn’t able to receive a passport in the end.

Malika says with sadness that she finally had to pay two thousand US dollars to a middleman that was introduced to her by a friend to get passports for her sister and niece. She says that amount of money was necessary to be paid; otherwise,  she would lose her niece. I asked her why she was dealing with this sad state of affairs? She said sadly, “The behavior of the staff members at the Directorate of Evaluation of Health Laws is humiliating and inhumane.” She further added, “This behavior is not worthy of a human, let alone an animal.”

When I asked her, how she felt now that there was a way to take a passport by paying a bribe? She says, “I felt very tormented and cursed the Taliban government and prayed to God thousands of times for this regime to end.” She emphatically asks me not to reveal her identity—while with an air of despair, she says, “Afghanistan has no future and we, the people, have become victims of selfish wolves.”

But it seems that Malika’s story is not the only story of corruption in the passport departments under the Taliban administration.

Jameel (pseudonym), who has Belgian citizenship, says that during the exit operation after the fall of Afghanistan into the hands of the Taliban (August 2021), the passports of his wife and children went missing, and they had applied for new passports. But Jameel says that after five months of waiting and no positive outcome—he finally approached the middleman to get a passport. He says he has paid 2,000 euros to get passports for his wife and two children, and he is still waiting for them to join him in Brussels.

I asked Jameel about how people pay bribes to get the passport. He said that near the passport directorate, the middlemen are cleverly conveying messages to the passport applicants who are waiting in lines and saying that it is not possible to get a passport through the normal official procedure and it may take months, so a bribe must be paid. According to him, his family has had such an experience before, and finally, after interacting with the middleman, they deposited the bribe money to a reliable source trusted by both parties.

Jameel, who lives in the West and has fewer dealings with corruption and bribery, says that what is happening in Afghanistan is disappointing for him. I asked him why he paid the bribe. He said, “Necessity makes it permissible.” What he meant by this proverb is the compulsion that forced him to pay the bribe money to the passport middleman for the sake of meeting his children in Belgium. He added, “When it comes to matters of bribery, the Taliban are more nuanced than the Afghan government.”

When I talked to people who paid bribes to get passports in Herat, Panjshir, and Balkh, the story of the black market for passports is the same, but only the prices are different. I went to Maliha (pseudonym), a current resident of Kabul and previously a resident of Parwan province. Maleeha says that after the fall of the Afghan republic, her family decided to move out of Afghanistan, and for this, they needed passports. She adds that they went to Parwan passport department to get passports, but when it was time for biometrics, passport department officials under the Taliban administration told them their documents went missing.

Maleeha says that they applied a second time to receive the verdict in Kabul. She says that her father talked to a middleman who was also an employee of the passport directorate and paid bribe of 70,000 Afghani in exchange for the verdict. But according to her, when it was time for biometrics, the employees of the passport directorate said that the document was fake and if he [my father] did not leave the office immediately, he could be thrown in jail. Maleeha, who is disappointed with the current situation, says, “When we paid bribes, we understood that the situation in Afghanistan was bad, and now it is worse.” She adds with despair, “Afghanistan is on the verge of destruction, and there is no future to think about.”

According to the Afghan citizens waiting to receive a passport, it seems that it is no longer possible to hide bribery in the Afghan passport departments under the Taliban administration. Although almost every month the Taliban officials in the General Directorate of Passport talk about the arrest of the middlemen who are facilitating the passports in exchange for bribes, but the existing reality not only does not show the disappearance of bribery, but also indicates an increase in the amount of bribe money.

When I was writing this bitter truth in Afghanistan, I remembered words of Naweed, a resident of Kabul, who also paid a bribe to get a passport, “The prices have increased, and now the price of one passport is 1,400 US dollars. Previously, they used to take bribes under the tricolor flag (Afghan republic’s flag) of democracy, and now they take bribes under the white flag, under the name of the Islamic Emirate.”

Originally posted on Eitlaatroz in Farsi.