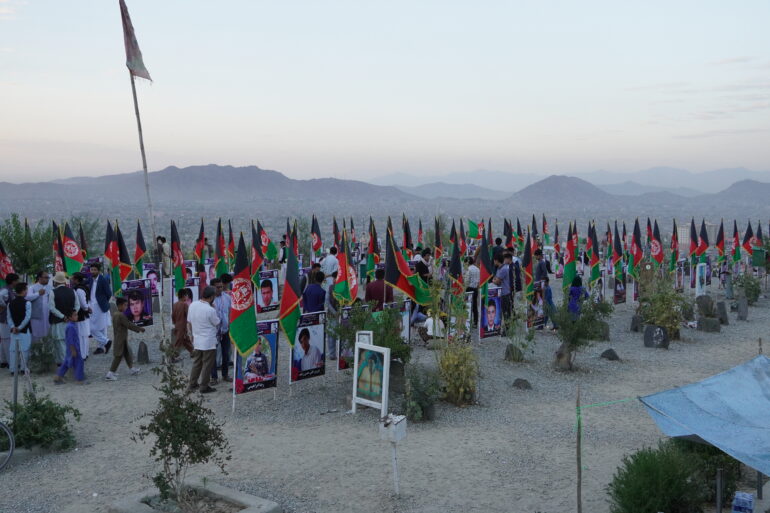 Enlightenment Movement Graveyard, Hundreds of Hazara students killed in a series of targeted attacks are buried in this graveyard.
Kazim Ehsan·October 19, 2022

On September 30th, 2022, at around eight o’clock in the morning, Hajar’s sisters, Sara, and Parvaneh were having breakfast, doing the usual household chores, and getting ready to do their homework before going to school. Hajar had already gone to Kaaj with her friend, Marzieh.

The doorbell rings, catching Parvaneh by surprise. She hesitates to answer the door. The doorbell rings again, this time more intensely. Parvaneh runs to open the gate and sees Onsia, her cousin, whose fallen countenance is filled with anxiety.

Is everything all right? Parvaneh asks.

Onsia, panting, starts speaking with a broken voice, “Hurry! there has been a huge explosion at Kaaj Educational Center. Dozens or maybe a hundred are killed. I tried calling Marzieh and Hajar, but their cell phone is switched off.”

Parvaneh informs her older sister about the explosion and rushes to visit the blast site at Kaaj along with Marzieh’s sister, Onsia. After they arrive at Kaaj, they find hundreds of people gathered.

The Taliban’s armed forces surround Kaaj and block access inside. They try to disperse the crowd by frightening the family members at the site. Some of the Taliban are seen laughing at the relatives of the victims. After struggling to find their way to the front of the crowd, Onsia and Parvaneh beg the Taliban to let them inside the building.

When they enter the building, they find nothing other than blood, torn and pierced body parts, shattered glass, and broken chairs and tables. A man, probably from Kaaj’s management, tells them that both the victims and the injured have been taken to the hospitals. Others are told the same thing: they should check the local hospitals if they are looking for their loved ones.

Onsia’s cell phone rings. Her father, Ghulam Ali, says that he is with Hajar’s father, and they have searched every hospital to find Marzieh and Hajar. “Others have gone to different hospitals to find them, but they are nowhere to be found.” Onsia and Parvaneh rush towards Ali Jinnah Hospital, where most injured and dead bodies are taken.

Inside Ali Jinnah Hospital, a large crowd gathers. Everyone insists on entering the hospital to find a trace of their relatives. Here, too, the Taliban armed forces push everyone back; some are severely beaten and hospitalized.

Some are seen leaning on the walls, while others are holding their heads, bursting into tears. A mother–violently hitting her face–screams her daughter’s name. In a corner, a young man is silently sitting with a bloody school backpack by his side, with his head lowered to the hospital floor, unable to speak. Someone points at him and says he has been running everywhere since the morning. He picks up the backpack next to the man and says that this is the only sign he has found of his missing sister.

A man is seen speaking with a reporter asking him if he knows how many people are wounded or killed at Kaaj. The man says he does not know the exact number, but he has witnessed nearly two hundred dead and wounded taken to hospitals. Hearing this news makes Onsia and Parvaneh filled with despair.

They make their way inside the hospital. In the corridor, Onsia’s eyes catch a glimpse of her father, Ghulam Ali, who is sitting on the floor and crying. Onsia runs toward her father and asks him about Hajar and Marzieh. Without saying anything, his father points around the morgue with his hand. Onsia runs to the morgue, but her father stops her, saying it is too late and Marzieh is already gone. Hearing this makes their legs numb. In shock, they both sit on the floor, unable to cry or speak.

With Hajar still missing, Ghulam Ali, a middle-aged man with dry, chapped lips and a worried face, walks from one hospital to another, desperately searching among the wounded and corpses, looking for his 19-year-old daughter. First, he went to Barchi Hundred Bed Hospital, then rushed to the next hospitals: Watan Hospital, Ibn Sina Hospital, and Mohammad Ali Jinnah Hospital. He asks the doctors, nurses, and anyone else he comes across. No one knows anything of Hajar, and she is nowhere to be found. Every time he leaves a hospital, he is less hopeful that he will find Hajar. He calls home to see if Hajar has gone home, but she is not there.

Finally, he is told by the doctors at Mohammad Ali Jinnah Hospital to go to the Forensic Medical Hospital in Darulaman, where some unidentified bodies from the blast are taken.

At noon, Hajar’s father arrives at the Forensic Medical hospital, where authorities tell him that several unidentified bodies have been brought for forensic analysis. He rushes to the morgue room, where many corpses are placed next to each other on the mortuary tables. All covered with white sheets and bloody clothes. He slowly walks to each table, removing the white cover, but none of the bodies can be identified. Except one that has a similar height and weight to Hajar’s. Covered in dirt and blood, he approaches and carefully stares at the corpse. He sees a pen still between Hajar’s right-hand fingers. Looking at her face, her father cannot recognize her anymore as half of her skull is missing. His heart starts trembling, and his legs go numb. Ghulam Ali is still in denial that this corpse is Hajar’s, trying to convince himself that Hajar is still alive.

Standing next to the corpse, he rings Parvaneh to see what clothes Hajar wore when she left home in the morning. Parvaneh says, “Hajar was wearing a red floral skirt with blue jeans…Sarah and I are on the way and will arrive in a moment.

Ghulam Ali carefully looks at the blood-soaked clothes. The red skirt and the blood-soaked blue jeans match the description that Parvaneh provided, but he still cannot accept that this is his daughter’s corpse.

Meanwhile, Parvaneh and Sara arrive at the Forensics center. They run to their father, standing beside a corpse covered in blood. Parvaneh cannot bring herself to look at the corpse. But Sara, her younger sister, stares at the corpse, scanning it carefully, turns her face to his father, and exclaims, “Father, this is Hajar’s corpse!”

Ghulam Ali and his two younger daughters take Hajar’s body home. They wash her bloody body for the funeral. He removes the pen that Hajar was holding between her fingers and takes Marzieh, Hajar’s childhood friend and classmate, to bury in Danaie Cemetery on one of the hills west of Kabul. Hundreds of Hazara students previously killed in targeted explosions at educational centers and universities are buried on the same hilltop at the cemetery. The hilltop is named “Tapa-e-Danaie” – meaning the ‘knowledge hill’ – commemorating the victims of the previous attacks.

The day that Ghulam Ali took Hajar and Marzieh’s corpses, forty bodies were buried on the hilltop. Many of the corpses were sent back to the provinces where the victims were from.

A large crowd gathers on the hill, where they have dug forty graves to bury some of the best and brightest Hazaras. An old man among the crowd whispers, “Others bury their old, but us Hazaras, we bury our future!”

The day after Hajar and Marzieh are buried, Sara and Parvaneh, Hajar’s sisters, go inside Hajar’s room to hide her books away from their parents. Dozens of books and notebooks are neatly arranged in the corner of Hajar’s small room. Her sisters had never paid attention to the books that Hajar was reading. They find motivational books and novels by the American self-help guru Rachel Hollis and the Turkish-British novelist and writer Elif Shafak.

Among the books, they find Hajar’s diaries, where she has jotted down her favorite music band, her dream house, and all the places she wishes to visit in the future.

In one of the entries, Hajar writes of studying intermediate English and receiving excellent grades in other subjects at her school, all so that she can study architecture in the United States. She also writes of her dreams of visiting South Korea and meeting her favorite authors, Elif Shafak and Rachel Hollis–and on several occasions, she wishes to thank Rachel Hollis in person for motivating her to pursue her passions.

But Hajar’s dairies are not all about her inspiring dreams and goals. She also writes of bitter experiences–detailing the suffocating conditions of her life under the violently strict and religiously extremist rule of the Taliban–to the challenges of being a young woman in Afghanistan and how she fears continuing her education.

In one text entry found on her phone, she articulates her experiences beautifully,

“We are alive but don’t know how our days and nights pass. There is no end to our suffering.  Everyone has forgotten their way of living in this city. We all [probably] once knew how to live, but not anymore!

Do you know what living in a cage looks like? Maybe you have never lived in one. But those stuck here [in Afghanistan] know that life inside the cage is a gradual death. Every moment is death.

We girls of this land are like caged pigeons. Our freedom has been taken away to the extent that others now determine how we should dress. Others choose our field of study. Others determine even our fate. Is there anything else that we can decide for ourselves? No, none left for us. They consider themselves the world’s supreme creature, while their level is lower than the ignorant. Yes, this is life in a cage.”