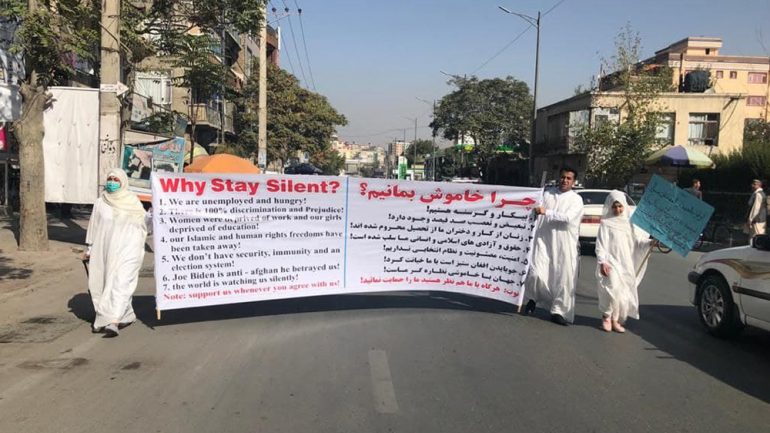 Mohammad Saber Watandost, a university lecturer, took to street in the capital Kabul while shrouded along with his family members to protest the deteriorating overall situation in Afghanistan.

Talking to Kabul Now, Mr. Watandost complained that the injustice is prevailing, the people’s legitimate freedoms have been taken away, and the deprivation is expanding.

As written in a long banner, the family protested against unemployment, existence of discrimination, ban of women’s education, violation of human rights and freedoms, insecurity, and demolishing the electoral system. “We are unemployed and hungry?” one of their slogans read.

The protesting family kicked of their march around 09:00 AM this morning, Wednesday, from Saleem Karawan square to the downtown Shahr-e-Naw. Around an hour later, the Taliban, however, stopped them violently.

Mr. Watandost claimed that the Taliban have beaten at least two journalists who were covering the protest, confiscated mobile phones of whoever filmed the protest and then deleted the footage.

To prevent harmful actions against the women and children, we have ended our protest after watching the Taliban resorted to violence, the university lecturer noted.

The Taliban have yet to comment regarding the incident but they have previously committed the same violence and conduct against journalists and protesters in Kabul, Herat, and Balkh provinces.

The protesters called on the United Nations, international human rights organizations, and members of the UN Security Council to save Afghanistan and its people and prevent an imminent and humanitarian disaster awaiting the Afghan people.