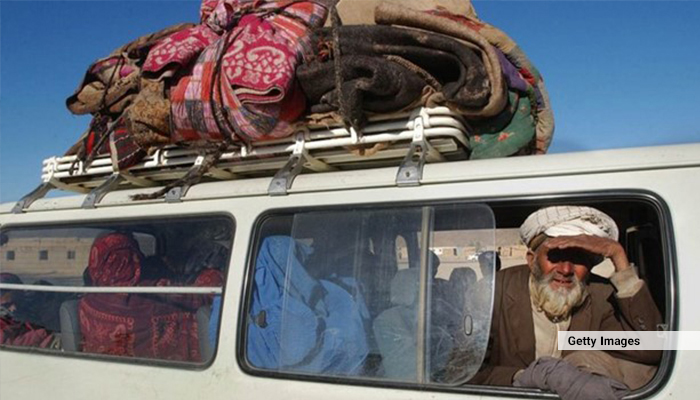 War forced thousands of families to flee their homes

Two weeks ago, Ghulam Reza, 36, fled his home along with his 16-membered family in panic when the Taliban launched offensives on Malistan district of Ghazni province.  They arrived in the capital Kabul but without two members of the family. The militants had shot dead two brothers of Ghulam Reza, who were both civilians, in their home village.

The dramatic rise in violence across the country has forced thousands of people to flee their homes and seek refuge in provincial centers or major cities. According to the Ministry of Refugees and Repatriation (MRR), around 50,000 families have left their homes and sought refuge in provincial centers since July 20. The displaced families are mostly from contested territories and the districts that the Taliban have captured in recent months. They are now in dire need of assistance.

“We are homeless for 13 to 14 days now. We took shelters in mountains with a 40-day newborn baby for three to four days and nights. One of my daughters got sick. She was about to die,” says Surayya, 30, mother of eight children all under the age of 18. Her 10-membered family fled their village in Malistan 14 days ago. “We waited for several days in the mountain expecting stop of violence in our village. But it didn’t happen and we were forced to leave.”

In its midyear report on protection of civilians in armed conflicts, the United Assistance Mission in Afghanistan (UNAMA) said that more than 200,000 Afghans were displaced from January 01 to June 30 this year. “More than 200,000 Afghans were displaced due to the conflict, as they feared worsening conditions and treatment amidst continued changes in territorial control,” the UNAMA said in its report released on July 26.

Surayya and thousands of other families have been displaced facing an uncertain fate as their district, Malistan, is still under the control of the militants. According to a figure prepared by Malistan’s community council in Kabul, a total of 3,000 families have fled the district. Some of the families who have sought refuge in the west Kabul are now provided with shelters in mosques, houses of their relatives, and empty shops. The government has yet to assist these families.

Though the MRR says it has now focused most of its operation and budget on providing shelters to internally displaced families, but the displaced people from some provinces complain that they have not received any assistance from the government. Addressing the basic needs of the displaced people, including providing shelter, food, and in-cash aid, is underway, says Reza Baher, spokesperson for the ministry.

However, some displaced people from the provinces of Ghazni, Bamyan, and western Afghanistan complained to Kabul Now that they have not received any government aid so far.

With the war spreading almost across the country, people have been displaced from all provinces. But the MRR says Kunduz, Faryab, Jowzjan, Laghman, Kandahar, Helmand, and Nangarhar have the highest numbers of internally displaced people.

Abdul Aziz Maldar, has been displaced from Rubat Sangi district of Herat to Herat city for 20 days now along with his family. “We have nothing. I’m representative of 50 families and have brought their list to the refugees department. All these families are living in a bad condition and lack food materials,” he said who had referred to the refugees department of Herat province.

Rauofa, 30, who is a mother to five children, was displaced a month earlier from Qala-e-Naw, the capital city of the western Badghis province when the Taliban stormed the city. With a written request, she had referred to Ansar Camp, a camp allocated for refugees returned from Iran, demanding assistance. “Dear brother, please tell the refugee department head that we have nothing. I don’t know where my husband is and I’m living with three other families in a house. I swear to god that I do not have anything.”

According to Mubin Qaderi, head of Herat’s Refugees and Repatriation Department, more than 2,000 families have been displaced to Herat city from Herat districts and some western provinces over the past two months. He added that the government has limited sources to provide assistance and they can only provide a limited number of the displaced people with assistance.

The Taliban overran around 100 districts over the past few months. Though the government officials repeatedly promised to launch operations to retake these districts, still the group control much of the newly fallen districts. Of 388 districts, the Taliban had claimed earlier this month that they control 150 districts. The government, however, had confirmed the fall of 80 districts into the hands of the militants.

Some displaced people ask the government to push out the Taliban militants from their neighborhoods and pave the ground for their return. “The only demand we have from the government is to retake Nawabad from the Taliban. We are waiting here in Kabul until the situation gets better in Ghazni and we can return home,” says Adila (pseudonym), 17, who fled Nawabad, a neighborhood in the suburbs of Ghazni city, few days ago along with her seven sisters and mother.

The neighborhood is now under the control of the Taliban with the militants have reportedly taken positions inside residential houses.

Citing her friends and relatives, Adila said that the Taliban have imposed strict laws in their neighborhood and do not let women and girls get out without a male guardian.

The Taliban have shot dead Ghulam Reza’s two brothers, the 31 years old Ramazan and 29 years old Eshaq Ali, in Malistan. The rest of Ghulam Reza’s family have fled to Kabul leaving all their properties behind. “All our properties are there and we have nothing here in Kabul. We want to go back to our village.”