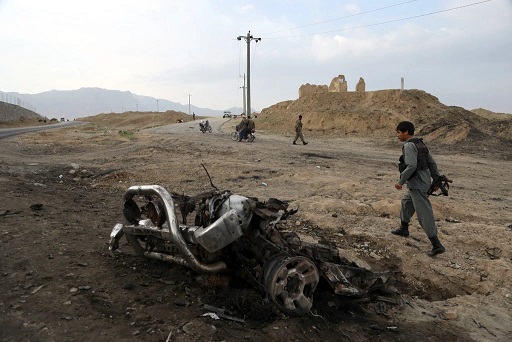 As many as 18 people, including 13 Taliban militants and four policemen, were killed and 19 others wounded in fresh waves of violence erupted in Badghis and Daikundi provinces, according to local officials.

Four policemen were killed and one other was wounded after their vehicle hit a roadside bomb in Ab Kamari district of the western Badghis province, according to the governor.

Talking to Kabul Now, Hessamuddin Shams, Badghis governor, said that the incident took place on Tuesday, March 23. He added that the victims are those policemen who were dispatched to the area in an operation to clear Ab Kamari district from the presence of the Taliban.

The governor claimed that five Taliban militants were killed and seven others wounded since the beginning of the clearance operation, adding that the operation will continue until all the district is cleared from the presence of the militants.

The Taliban has made no immediate comment in this regard.

Situated in the northwestern part of the country, Badghis is an insecure province where the Taliban launch sporadic attacks against government forces.

On the other hand, a civilian was killed and five people, including three security forces, were wounded after a police security outpost came under attack by the Taliban militants in Kijran district of the central Daikundi province.

Mohammad Ali Urozgani, deputy governor of Daikundi, detailed that the attack was repelled and eight militants were killed and six others wounded in counterattacks by the security forces.

The Taliban has not commented on this incident in Daikundi.

Daikundi is a relatively secure province but the Taliban militants launch sporadic attacks in Kijran and Patoo districts from the neighboring Helmand and Urozgan provinces.