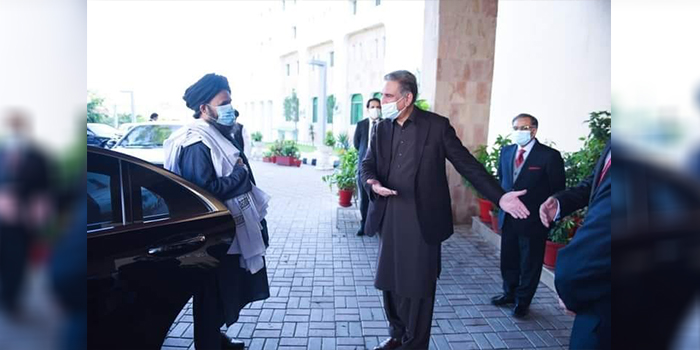 Ahead of the second round of Afghan peace talks, Mullah Abdul Ghani Baradar, deputy leader of the Taliban, leading a delegation paid a three-day visit to Pakistan and met Pakistani authorities. Pakistan’s visit of Mullah Abdul Ghani Baradar came under spotlight and sparked nationwide criticisms in Afghanistan, including by the Ministry of Foreign Affairs (MFA) which had confirmed that his visit to Pakistan was facilitated in coordination with the Afghan government. Video footages released on social media show Baradar is apparently visiting the Taliban wounded fighters, who are under medical treatment in Pakistan, and deliver a speech of victory in a gathering of his followers. “You must stay united. The world will take us serious so much as you make victories in the battle fields and [embrace] martyrdom,” he says in his war-mongering speech to a large number of Taliban who are gathered around him.

The next round of intra-Afghan talks is set to start tomorrow, Monday, January 05, in Doha. This comes after the Islamic Republic of Afghanistan and the Taliban reached an agreement on procedure and principles of negotiations. During the break, the government and the Taliban negotiators met their respective leaderships in Kabul and Pakistan, receiving consultations and advice on how to negotiate agendas, particularly a power-sharing deal as revealed recently by Abdul Hafiz Mansour, a government negotiator, in upcoming talks.

The Afghan government often accuses Pakistan of violating Afghan sovereignty. Following Baradar’s visit, the MFA said that the video footage of Taliban leaders shows they visit training camps of the militant group in Pakistan freely. It further went on to accuse Pakistan of publicly violating Afghanistan’s national sovereignty by letting the Afghan insurgents and their leaders to publicly operate inside Pakistan.

Mohammad Ikram Andishmand, a researcher, says Pakistan has a different approach towards the Afghan peace process. “Pakistan sees the Afghan peace process as implementation of the Doha agreement which, indeed, is the Taliban victory with establishing an Islamic government or under any other title under the leadership or around the Taliban axis,” he noted, adding that the Taliban and Pakistan believe in their victory and defeat of the US in the US-Taliban agreement.

Moreover, Mr. Andishmand, stated that Islamabad will use connections and clout to persuade some other Jihadi groups to align them with the Taliban and force President Ghani to step down. “Given having an old relation with [Jihadists], Pakistan will [try] to facilitate these groups to remove Ghani [from power].”

Splits among the Taliban, particularly slits between its military and political wings, have been raised repeatedly in different times in recent years. Now, as the group is taking steps forward in peace talks with the Afghan government, still such accounts are made to their address. It gets even more serious as their growing violence takes scores of lives, including a huge number of civilians, despite the group’s political leadership had committed in the US-Taliban agreement signed on February 29, 2020, in Doha, to significantly reduce the violence.

Arash also believes that Baradar’s visit to Pakistan is partly meant to consult with the Taliban leadership and seek their guidance and also meet with the Taliban commanders, particularly those commanders who are not satisfied with the Doha agreement and intra-Afghan talks. According to him, the Taliban religious and political leaders are extremely worried about a possible disobedience of their military commanders. “This is why they negotiate with their military circles secretly in every phase of the peace talks,” he noted, pointing out to Baradar’s speech among the Taliban fighters in Pakistan as an instance. Mullah Yaqub, who is son of the Taliban’s founder Mullah Omar and has a spiritual position among the militants, was appointed as chief of the Taliban military commission to bridge the gap existing between the leadership body and Taliban fighters.

“Mullah Baradar is a very thoughtful [man] and does not make random comments,” says Nazar Mohammad Motmaeen, who seems a pro-Taliban political commentator, while describing Baradar’s presence among the Taliban wounded fighters as meaningful. He assures that the Taliban are not seeking to re-stablish their Islamic Emirate in Afghanistan and do not want to capture Kabul by war.

On Baradar’s visit to Pakistan, he said that his visit was aimed at preparing the Taliban military wing for making peace and readiness for the second round of intra-Afghan talks.