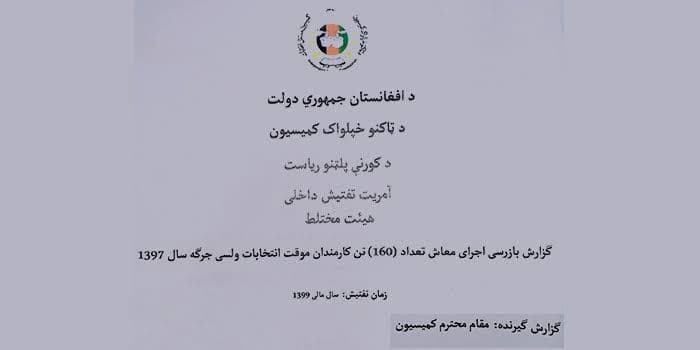 Findings by a delegation of the Independent Election Commission (IEC) reveal that a number of officials at the IEC have requested a total of 8,292,000 afghanis as salary payments for 160 short-term appointed workers of the IEC in Nangarhar province while their total salaries, as set in the IEC’s salary scale, amounts to 6,615,138 afghanis – suggesting a difference of 1,676,862 afghanis. Findings suggest that IEC’s Secretariat has requested (47487) the Ministry of Finance (issued on June 28, 2020) to pay an additional amount of more than 1.5 million afghanis for the purpose of salary payment of 160 employees who, as the evidences show, were appointed as civic educators, employees, and officers for the IEC’s provincial office in Nangarhar.

On December 12, 2020, the Daily Etilat-e-Roz published a report suggesting that there were contradictory reports about failure in payment of salaries for 160 employees of the IEC in Nangarhar who had worked with the Commission in 1397 solar year. Following the publication of of the report, a committee assigned by IEC’s audit department identified at least 12 shortcomings in contracts of the short-term appointed staffers and handed over their findings to the leadership of the IEC. The Chairperson of the IEC, Hawa Alam Nooristani, confirmed there were shortcomings and expressed doubt over authenticity of the staffers contracts.

Following the report published by Etilat-e-Roz, President Ghani issued a directive (12802) on December 14, 2020, instructing the IEC to investigate the case and address it.  Pursuant to the instruction by the President, the IEC assigned a four-membered delegation on the same day, December 14, to assess failure in payments of salaries of 160 short-term appointed employees of the IEC in Nangarhar.

The delegation undertook an immediate investigation, reviewing the contracts signed between the 160 employees and IEC in five days. Talking to the employees and doing field observations in Nangarhar, the delegation completed investigation on December 18, 2020. Findings by the delegation suggest that a total of 24 million and 852,119 afghanis were allocated for salary payments of the IEC’s employee to the code 210 of the IEC office in Nangarhar, during the 1397 fiscal year. A sum of 14 million and 362,049 afghanis were spent from the allocated budget while 10 million and 490,070 afghanis was deducted from the budget in that fiscal year. According to Nangarhar’s Mastufiat office (finance department), a total of 63 money transactions have been made from 210 budget code of Nangarhar’s IEC office in the same year.

Review of [money] transactions made for salary [payments] of the IEC office in Nangarhar during 1397 fiscal year suggests that [money] transactions have been made but salaries of 160 officers, employees, and civic educators of the IEC were not paid from it, the delegation reported. “Copies of M16 forms sent by Nangarhar’s Mastufiat department also confirms the aforementioned point,” part of the report reads.

As per account by the delegation, failure in salary payments of the 160 employees was caused by duty negligence committed by the then officials of the IEC’s leadership and finance department. The delegation recommended that the salaries of the IEC employees should be paid under supervision of a committee led by an IEC commissioner with their original copies of Tazkira and contract checked. The IEC officials who committed duty negligence should be punished, the four-membered delegation recommended.

Documents obtained by Kabul Now suggest that the IEC Secretariat has requested an additional amount of more than 1.5 million afghanis from the Ministry of Finance to pay salaries of the 160 employees.

According to the report prepared by the IEC’s four-membered delegation, the total salaries for 160 employees of the IEC, as per the contracts and the Commission’s salary scale, amounts to 6,615,138 afghanis. “The IEC’s Secretariat, however, has requested disbursement of 8,292,000 afghanis via its official letter issued by its finance department on June 28, 2020 – suggesting a difference of 1,676,862 afghanis,” the delegation wrote in its report.

The delegation accuses the then IEC’s finance officials and the Secretariat Chief of not paying attention and hesitating to cross-check salary request with the Commission’s salary scale. They also warned that continuation of such acts would waste time of the government and may lead to the country’s economic downturn.

In its report to the IEC’s leadership, the delegation asked for punishment of the perpetrator in accordance with the provision of Afghanistan’s penal code on embezzlement charges.

Moreover, the IEC has hired five short-term workers for one month in 1397 but their contracts—with three of them missing signature of the then IEC provincial chief for Nangarhar—have been signed for two months. According to the delegation, while the IEC secretariat has approved their contracts just for one month with a 15,000 afghanis salary, a salary of two months have been received.

Manipulating contracts to get advantages

The IEC delegation has found that contracts of the 160 employees have been manipulated. According to finding by the delegation, IEC officials have manipulated contracts signed between the 160 short-term appointed workers and the IEC—using ink eraser in original contracts to get the contracts approved in contradiction to IEC’s 1379 salary scale.

Pointing to a provision of the Afghanistan penal code about document forgery, the delegation said that the IEC officials in Nangarhar are obliged to identify those who committed document forgery and introduce them to the IEC. It further called on the IEC to bring perpetrators to justice.

In October, 2020, the Internal Audit Department of the IEC reviewed the case of salary payment of the 160 employees, identifying 12 deficiencies and flaws in the contracts signed between the two parties—the employees and Nangarhar office of the IEC. Finding by the delegation says that the audit committee has deliberately refused to highlight “additional amount of over 1.5 million afghanis and other flaws in their report.

The leadership of the IEC have yet to make final decision on this case. In December, 2020, Ms. Nooristani told Kabul Now that the Commission’s leadership would decide regarding the issue soon after an investigation by the four-membered delegation was completed.

This report has been developed by Etilaatroz’s Elyas Nawandish and translated into English by Mokhtar Yasa.