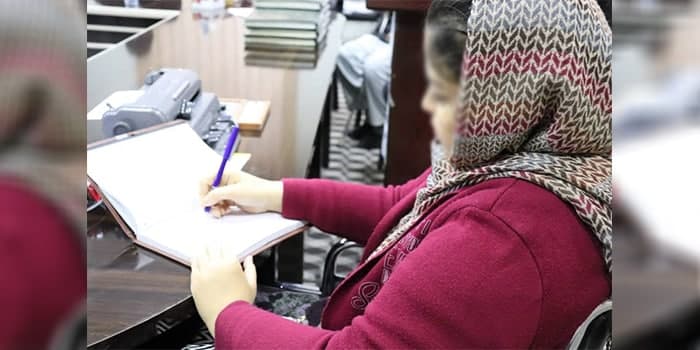 Be kind to persons with disability: Gulchehra

“Everything happened at once. I was a second year student at university, symptoms of osteoarthritis appeared in my body. My legs felt heavier as days passed. I slowly lost my walking ability and became a cripple. While I was trying to come to terms with my disease, I realized that I was pregnant,” says the 32-year-old Gulchehra.

Being the sixth child in her family, Gulchehra was in a summer day of 1987 in the northern Balkh province. When she was 15, her family wedded off to her cousin, Rasol, who then studied medical science in Kabul.

Engineering was her favorite subject. Upon her graduation from high school, she passed kankor exam, university entry exam, and got admitted in economics department of Balkh University.

Things got worse for Gulchehra after she was diagnosed to have osteoarthritis. The pain caused by this disease and coupled with heavy burden of becoming a mother and expectation by her in-laws, as she now recalls, made life a day-to-day ordeal.

According to the International Committee or the Red Cross (ICRC), about 1.5 million population—or one in 20—live with some kind of physical disability in the country.

Rasol’s parents would ridicule me, as I was crumpling, whenever I was visiting them, says Gulchehra. In 2005, she went to India, hoping to get treatment but doctors told her that she could survive for three years if her legs were operated. She returned with a deep sense of hopelessness, realizing that disability was what she had to live with.

Even though Rasol was happy in his life, as Gulchehra tells now, but his family members put pressure on him to change his mind and seek a new marriage. They would often say that a mother with disability will give birth to a child with disability.

I was pregnant, expecting to give birth to my first child and my in-law’s family was preparing to remarry Rasol. They told me to get abortion, making so many excuses. They accused me of illegal sex with a stranger after they realized that my baby was a girl, saying that traditionally the first child of the family has always been a baby boy, Gulchehra says. “I was accused of adultery despite the fact that I was at home 24 hours. Wait for birth of my baby and once she is born you can do DNA test to check if she is Rasol’s or not, I told them.”

Many Afghan families prefer boy to girl. Few weeks ago in Kabul, a mother was killed by her husband for she had given birth to a baby girl.

Be kind to persons with disabilities.

With the arrival of new bride, her in-laws started neglecting Gulchehra so that she would leave the house. “Rasol told me to leave the house because he got a healthy wife. I used to spend days and nights in a room, but no one would visit me,” Gulchehra said.

Despite all odds, she gave birth to her baby girl who died four days after her birthday.

Gulchehra says she demands her husband to divorce her but he resists, making different excuses.

Painful and difficult though it was to survive, Gulchehra never gave up. With the help of her parents, she succeeded to graduate from university and earn a BA degree. In 2016, she founded a welfare association called social association of women with disabilities.

In an interview with Kabul Now, Gulchehra said that it has never been easy to fight against negative thoughts and perceptions that society holds about her and other women with disabilities. “Once, my family and close relatives said that they wished me to be a boy so that I could beg on the street. The idea of considering a person with disability as a beggar, needy, and helpless is common among most people including my family.”

Families need to pay more attention to their children and be kind to persons with disabilities, she says as she moves to a quiet corner of her room.