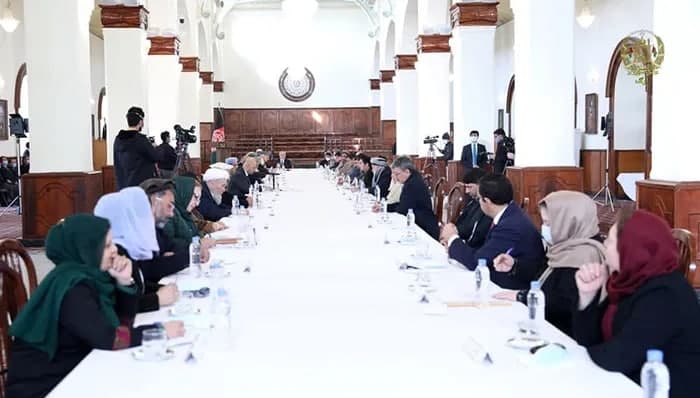 The first meeting of leadership committee of Afghanistan High Council for National Reconciliation (HCNR) was held on Saturday, December 05, to discuss agendas for the coming intra-Afghan negotiations that is underway in Doha, Qatar. The meeting was held days after the government-led peace negotiators and the Taliban representatives reached to an agreement over procedure and terms of reference for negotiations.

Peace efforts by HCNR has intensified after a cohesive call by Afghanistan’s international donors, mainly by the European Union and the United States. In a joint statement issued on November 26, EU Delegation and EU Heads of Mission called for “swift establishment and operationalization” of the High Council. They called on two sides, the Afghan government and the Taliban, to agree on an immediate and comprehensive ceasefire.  Later the US Chargé d’Affaires to Afghanistan, Ross Wilson, wrote on twitter that he “fully endorse” the EU’s statement for convening the High Council and ceasefire.

Calls by Delegation and EU Heads of Mission sent a message putting a soft pressure on the Afghan government to end what then labelled as Ghani’s opposition and frustration against progresses in intra-Afghan peace talks in Doha. In mid-November, media started reporting that the two negotiating sides had finalized procedure and principle for negotiations but they needed to have it approved by the Afghan government in Kabul and by the Taliban leadership. On November 25, a government source revealed to Kabul Now that President Ghani was “frustrated” over the achieved agreement between the government and the Taliban negotiators and had recalled two prominent government negotiators to Kabul.

However, Abdullah Abdullah, the chairperson of the HCNR, welcomed the achieved agreement as a “breakthrough” for the stalemate in intra-Afghan peace talks that lasted for more than three months since September 12. Atta Mohammad Noor, Chief Executive of Jamiat-e-Islami Party and a leadership member of the HCNR, also joined Abdullah in welcoming the breakthrough.

As part of a power-sharing deal between President Ghani and Abdullah, which was struck after the disputed 2019 presidential elections late in May 2020, the HCNR was formed and operationalized under the leadership of Abdullah. The leadership committee of the High Council convened its first meeting on Saturday, December 05.

Addressing the meeting, President Ghani said that the intra-Afghan peace talks has entered its second phase and the subsequent peace must lead to continuation of the current political system, the Islamic Republic. “Peace must be agreed within a process that leads to continuation of the Islamic Republic of Afghanistan,” Ghani said, noting that any peace at the price of losing our past achievements is not acceptable to the government. President Ghani asserted that the negotiating team has strongly represented the Republic and constitutional values of Afghanistan in talks with the Taliban. Highlighting the people’s demand for a nationwide ceasefire, Mr. Abdullah stated that bringing about peace that protects the achievements, institutions, and political entities needed sacrifices. “We must not have an interest-centric vision towards peace.”

Former President Hamid Karzai, who once rejected the HCNR membership, said at the meeting that “all of us must strive for achieving peace out of official [structures]” – perhaps signaling and reiterating his previous stance that he will not be part of any government structure.

Mohammad Younus Qanooni, another prominent Jihadi and political figure, who is member of the Council’s leadership committee, expressed dissatisfaction over monopoly of the peace process. “Peace [process] is a national issue. I suggest taking it out of operation scope of the two electoral tickets and hand it over to the Afghan people,” he said. Mr. Qanooni hoped that the decisions regarding the peace issue should be made in the HCNR, not somewhere else.

The US Department of State welcomed the first meeting of the HCNR. “As an authoritative body on peace, the High Council and its Leadership Committee will provide counsel and guidance to the Islamic Republic negotiating team with the Taliban on the terms of an agreement on a political roadmap, power-sharing, and a permanent ceasefire to end the country’s long war,” the State Department said in a statement.

Sources from the government have recently confirmed that Sayed Ishaq Gilani, Farkhunda Zahra Naderi, and Rahmatullah Nabil have been also appointed as members of leadership committee of HCNR. However, none of them were present in the first meeting of the Council’s leadership committee.

A day after President Ghani released the list, Abdullah rejected Pres. Ghani’s decree on formation of the reconciliation council. He noted that formation of the high council was not in authority of the President. “Formation of this council is in authority of chairman of the High Council for National Reconciliation and does not require decree of the President,” the statement reads, pointing out to the political deal signed between President Ghani and Abdullah on May 17, 2020.

Gulbuddin Hekmatyar and Salahuddin Rabbani were not on the attendance of the first meeting of the Council’s leadership committee.