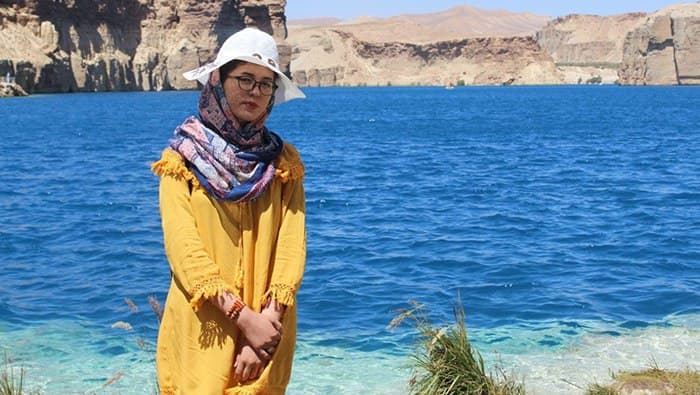 Sohaila’s mother either mourn or gets fainted since a week ago when she was informed of her young daughter’s death in the complex attack on Kabul University. Sohaila’s father is in the same condition and is unable to talk.

Portraits of the university student were hanging on walls inside the house in large and small sizes with poems written for sorrow, losses, and tragedies. It was a large house, but Sohaila’s death had created a bigger tragedy.

Sohaila Yari, 22, lost her life in the complex attack on Kabul University which left 22 dead and 27 others wounded. The attack conducted on Monday, November 02, was claimed by the Islamic State Khurasan Province but the Afghan government officials attributed it to the Taliban.

Lost in sorrow amid intense battle

Reza Yari, Sohaila’s brother, was informed about the attack on Kabul University via a message sent to him by his office around 11:27 AM on Monday, November 02. Reza rushed to the southern gate of the university after Sohaila did not answer his calls. However, Reza and a large number of others, who came to help their trapped loved ones escape the attack, were stopped by the security forces in front of the gate.

Though an intense war was going on inside the university with sounds of explosions and shelling heard one after another, Reza knew nothing about whereabouts of his sister, Sohaila. The moments when Reza was checking nearby hospitals, Sohaila was most likely being hit by bullets of the terrorists. “It was unbelievable for me,” he said about Sohaila who was shot with several bullets.

Reza started to become overwhelmed by sorrow as the war got intensified between security forces and the assailants inside the university. “I started to get disappointed. But it (Sohaila’s death) was far-fetched. I would think she is alive and unharmed.”

He would check social media momentarily as photos and video footage of the attack were being posted on social media while the attack was going on. After checking “Kabul Security” Facebook Page, Reza saw a photo of his sister fallen on the ground with her red-colored notebook covered with blood. Reza called his other sister, Fawzia, who studies at the same university, to ask about Sohaila’s clothing and head scarf. Fawzia’s answer confirms that the fallen student is Sohaila.

At the time when Reza was struggling to make a way into the university in search of Sohaila’s whereabouts, she was wounded and helplessly calling “mother!” the time and again. Shakila, a classmate of Sohaila who survived the attack, told BBC Persian Service that Sohaila was calling her “mother!” until her last breath.

“Ambulances would hurriedly come out of the university and  announce that two boys or two girls were inside it. Relatives and families of the martyrs would rush towards the ambulance to look for their loved ones,” Reza recalled the scene, adding that he could check with two ambulances after the attack was ended. Then, he decided to go to 400-bed hospital.

After hours of desperate searches, Reza finally found the dead body of her sister while her purse is still on her shoulder and her cell-phone is covered with blood inside an ambulance reached with his arrival at the hospital. He decided to transfer Sohaila’s dead body to Mohammad Ali Jenah Hospital fearing that her mother’s heart would stop beating, if she immediately face the death body of her daughter. Reza told his mother that Sohaila was injured and hospitalized at the 400-bed hospital.

Dreaming to become a leader

When I entered Reza’s house, he rushed to bring and show me all belongings left from Sohaila starting from her books to her colorful pencils kept orderly inside a box and all her appreciation certificates. It appeared that these belongings of Sohaila would relief Reza’s pain for a while.

Reza took out around 25 documents and certificates in a bid to show what achievements Sohaila had made during her school and university studies. Sohaila was graduated from Fizza High School – a high school for girls in Jaghori district of the southern Ghazni province – in 2015. She took the university entrance exam, Kankor, in the same year and scored more than 300 out of 360. With that score, Sohaila was admitted to her favorite field of study, public policy and administration, at Kabul University. As suggested by various certificates and documents awarded to Sohaila, she was dreaming to become a leader and tried hard to achieve the dream. Most of the certificates awarded to her are from leadership programs, public speaking courses, and attendance in various seminars held to discuss success of influential women, political and social issues.

Sohaila would repeatedly talk about her dreams of pursuing her master and Phd in leadership with her siblings. “She had big dreams. She would tell me that she wanted to become a successful leader and serve the people,” Reza said while his eyes glazed over her certificates that Sohaila had achieved from the Kabul Model United Nations and Youth Leadership Camp initiatives.

After passing a competitive exam in 2018, Sohaila won a full scholarship of India’s ICCR program. She, however, preferred to stay in Kabul for majoring in public policy and administration and then to continue her higher studies in one of the high ranking universities of the world. Taking a deep breath, Reza, wished his sister would have gone to India on ICCR scholarship. “At least she would have remained alive now,” he said regretfully.

Among the books Sohaila had shelved to read, Becoming from Michelle Obama was placed first. According to Reza, Sohaila had mostly read books written in areas of governance, Afghan politics, and power politics in the world. He further went on to name Sima Samar – former chairwoman of Afghanistan Independent Human Rights Commission – as a national role model and Michelle Obama as Sohaila’s role model in the world.


“If you want to sleep this way (forever), what will happen with the future plan we developed together? You told me that you will work hard in last semesters to score a higher , will take the TOEFl test upon my return, and do our Master’s degree together. You are not a fair-weather friend … I know how hard you had tried recently by sleeping late at night and waking early in the morning. What’s the wrong with you now,  Why are you sleeping this long on your notebook? Are you too much tired? Ah! I remembered you did tell me that you would enjoy taking a short nap on your book while studying. But my dear, it’s enough, you slept too long!” Halima Akbari, a close friend of Sohaila, sorrowfully wrote on her Facebook account about Sohaila’s death and future plans that will never be implemented.

Sohaila was organized in terms of developing different plans with specific goals for every semester at the university. She had developed a plan for her sixth semester at the university and titled it as “SMART Goal”. She had clearly defined the achievements, required resources and activities, how to evaluate her activities, and a timeline to review her lessons in her plan. Scoring more than 85 percentage at the university, daily review of the lessons, a full attendance, participation in class activities, doing ultra-curriculum studies, and creating a reading group out of her classmates are all the set goals in her plan.