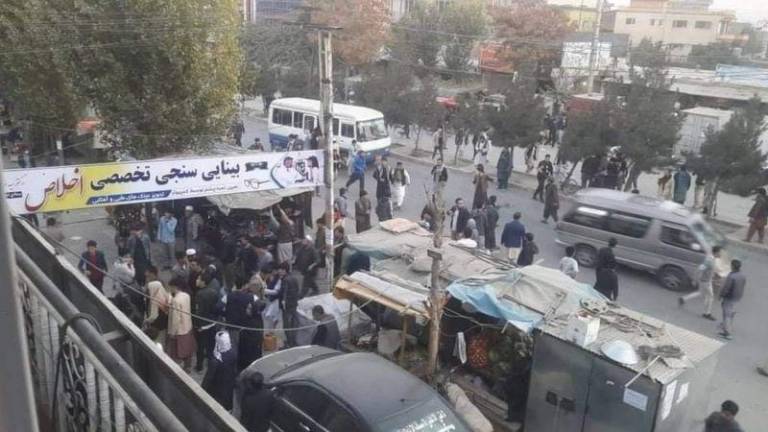 At least 30 students, mostly teenagers and one security guard, were killed and 70 others wounded after a suicide bomber detonated his explosives outside the tuition center when he was identified by the center’s security guard, according to the Ministry of Interior. The Afghan government and many ordinary Afghans blamed the Taliban for Saturday’s deadly bombing targeted a tuition center, Kawsar-e-Danish in western Kabul. Some even went further to provide evidence and reasons supporting their claims and called on the group to accept nationwide ceasefire to prove they are not involved in such complex attacks.

In a statement issued hours after the explosion, Office of the President, blamed the Taliban for the suicide bombing. The statement noted that “the Taliban still continue to escalate violence and protract their illegitimate war” despite the government has released “6,100 prisoners” of the militant group and called jointly with people of Afghanistan and international community on Taliban to agree to a ceasefire.

Zabihullah Mujahid, spokesperson for the Taliban, rejected the group’s involvement in the attack. A statement purportedly issued by the Islamic State (IS) claimed that the attack was carried out by a suicide bomber of Islamic State Khurasan Province (ISKP) – Afghanistan branch of the IS.

The ISKP claim and Taliban rejection, however, grew suspicious to an extent in which an Afghan university lecturer in Baghdad tried to prove it as “fake” by comparing the claim statement with statements issued by main branch of the Islamic State. The fake statement has a red background header, written by a non-Arab with the help of google translate, and describes the attack on Kawsar-e-Danish in series of the group’s exclusive war for releasing its prisoners, Hussain Barzani, a lecturer at university of Baghdad, denoted. “This way of issuing fake statements to cover up Taliban and Haqqani attacks is uncovering. The Taliban and Haqqani network are directly involved in the attacks and cannot acquit themselves with a statement,” he stated.

His claims regarding the Kabul attack was rejected by Abdul Sayed, a researcher on Islamist groups in South Asia. “This thread seems part of a popular narrative knotting ISKP attacks to be perpetrated by the Taliban, particularly by the Haqqani network, which could be logical for some of the high-profile unclaimed attacks of the post-US-TB peace deal, but it does not seem correct here,” he said about Ihsani’s comments.

Naheed Farid, who represents Herat province in the Parliament, wrote on tweeter that the Taliban needed to declare a ceasefire if they aren’t really behind the deadly bombing. “Pinning hope to peace negotiations with the Taliban is an illusion. This is not important for the Afghan people who will sign the peace agreement. An end to bloodshed is important,” the MP asserted.

Sharing condolences with families of the victims, former President Hamid Karzai, called on the Afghan warring parties to stop bloodshed and focus their efforts on succeeding the peace process.

Describing the deadly suicide bombing as a “crime against humanity”, Mohammad Karim Khalil, a Hazara political leader, call on the international community not to remain silent regarding the attack. He further called on security institutions to act responsibly for ensuring security of the citizens, particularly security of large gatherings and educational centers.

“The responsible authorities and international supporters of the peace process must note that such calamitous incidents will impact the peace process and would further ravage the violence,” he warned, adding that alike attacks must be prevented before it gets too late.

Chairperson of Afghanistan Independent Human Rights Commission, Shahrzad Akbar, said that the attack is a war crime and violates the rule of war according to international law and Islam.

In addition to Afghan politicians and officials, the suicide bombing was widely condemned by diplomatic missions of different foreign countries and organizations in Afghanistan.

Roland Kobia, European Union Special Envoy for Afghanistan, said that the attack and many other recent attacks illustrated the so called reduction in violence. “Enough. There must be full unity of the international community, + massive pressure for an immediate ceasefire asked by all Afghans,” he noted.

German Embassy in Afghanistan called for a halt in violence, noting that the culprits must be held accountable. It further reiterated that Germany continue to support Afghanistan to achieve a sustainable peace.

The UN Assistance Mission in Afghanistan described it as a “callous and senseless” war crime. “Those responsible for the crime must be held to account. Their violence must not be allowed to win. Everyone must re-double efforts to stem recent violence, especially that impacting Afghanistan’s civilians, & re-focus on talks to bring about a peaceful political settlement,” the Mission noted.