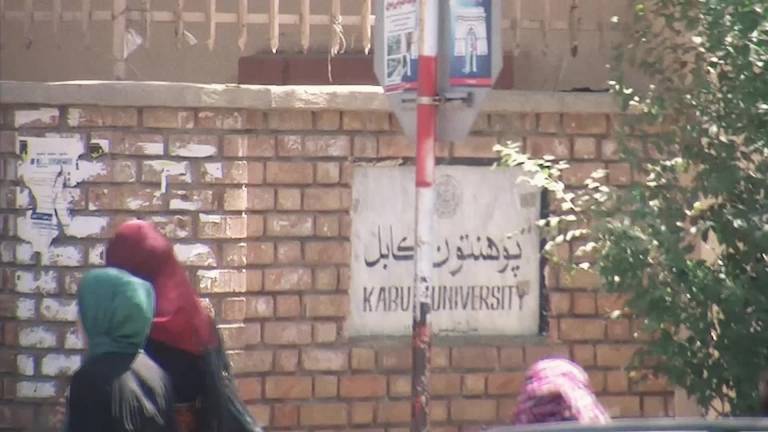 A lecture note titled as Taalimat-e-Sulh, literally means peace education, which is being taught at psychology department of the Kabul University (KU), labels some American universities, academic centers, scholarships and media outlets as preachers of Christianity among Mulims.

Written by Bashir Bahrami, an assistant professor at psychology department of Kabul University, this lecture note discusses peace and war from a perspective which according the writer is Islamic perspective.  Under the title of “war of ideas and its role in diminishing peace”, an ideological war is defined as war fought to preach hereticism. The writer categorizes the so-called ideological war against Muslims as follows: the crusades, colonization, orientalism and promoting Christianity, and sending Christian missionaries to preach Christianity among Mulsims.

As stated in the lecture note, orientalism is regarded to as “third conspiracy of the westerners for ideological war” against Muslims. “The orientalists are those scholars who influenced by their prejudice, come to study about Islamic culture and then publish stories—which are even other than findings of their study—to destroy Islam.” It talks about a range of books, magazines, journals, conferences, memoirs, and universities which are founded by western countries to fight an indirect “ideological warfare” against Muslims.

A substantial part of the lecture note is developed in a dogmatic way with extreme hostility against western cultures, Christianity, and in strong contradiction towards modern concepts and mediums which might promote xenophobia and extremism among the university students.

Ali Amiri, who is a university lecturer, believes that otherizaiton has roots in an old attitude which is common among Muslims who are pessimistic towards modern cultural and educational centers seeing them as colonizing institutions. The otherization approach, as Amiri puts it, will not be of any help to promote peace. It will possibly provide circumstance for further violence, he added. “We see all as our enemies, even the [educational] centers and universities, [this approach is dangerous] therefore some measure must be taken against it,” Amiri asserted.

Shahir Sirat, a researcher who has recently conducted a research study on roots of religious radicalism in Afghanistan’s school curricula, argues that the lecture is more aimed at seeking to draw a conspiracy theory rather than promoting or creating a peace debate. “This lecture note is much looking like a psychological propagation rather than a source for education. The lecture note is lacking educational standards and is developed unprofessionally,” he stated.

According to Ramin Kamangar, another researcher, contents of the lecture note have been largely developed in a biased manner. “In general, the contents encompasses a non-academic perspective.” The researcher explains that the peace lecture note illustrates Muslims in war against non-Muslims. He further went on to argue that the lecture note would promote radicalism and extremism among the university students.

Taking on the women’s freedom, the lecture note labels it as the strongest ideological warfare and most destructive weapon against foundation of Islamic society. The author of the lecture note is arguing that under the umbrella of women’s freedom, Islam is introduced as a religion which has oppressed the women and violated their rights. Then, he argues that no religion can be found throughout the history that has defended the women rights as much as Islam has. “The women’s [freedom] issue is not anything else but a conspiracy aimed at destroying the Islamic ethics, values, and plunge the Muslim ummah in quagmire of vice and corruption,” the lecture notes reads, noting that there are phased goals and different intentions hidden behind the term women’s freedom.

The lecture note stresses on banning co-education system while noting that a growing trend in women’s employment in governmental and non-governmental organizations have undercut Islamic ethics.

Ali Amiri says that such content is full of hatred. He sees it as a deep-rooted problem among Jihadi groups who look towards the issues of women rights and freedom as a conspiracy rather than looking at the issues from Islamic view point and through Quran. “Such viewpoint is not helpful for peace. These viewpoints have caused emergence of Takfirirs in the past and undermined foundations of the peace.”

Review of education curricula at universities

The lecture note seems to be developed with the above mentioned topics after the completion of the review process at Kabul University. Moreover, the lecture notes are usually developed in most of Afghanistan universities to grant the lectures a new academic promotion.

The lecture note will be corrected