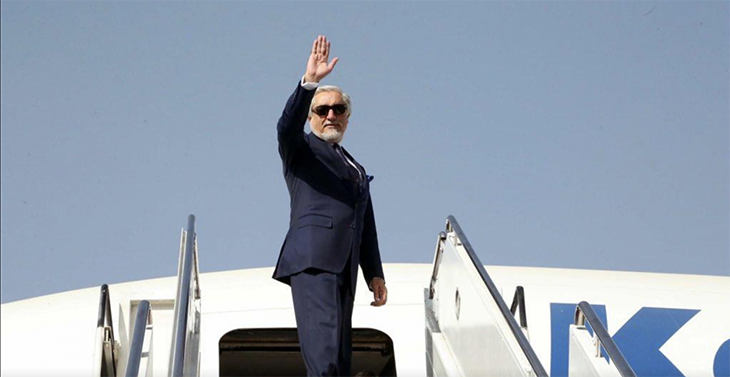 Abdullah arrived in India as peace efforts are underway in Doha

Negotiations between the government delegation and Taliban representatives started last month in Doha, Qatar. On September 12, Indian minister of foreign affairs, Mr. Jaishankar, joined the opening ceremony of the Afghan talks via Skype, promising that his government would fully support the Afghan peace process.

Abdullah’s visit comes at a crucial time when the Afghan government is putting efforts to build a regional consensus on peace in Afghanistan. India, a country which has a huge aid contribution to development projects in Afghanistan, is seen as a regional rival to Pakistan, which has long been accused of backing the Taliban insurgency.

On his first visit to New Delhi, in the capacity of the HCNR’s chairperson, Abdullah said that India has a vital role in the Afghan peace process. Mr. Abdullah, who comes from a political background which has been maintaining a historically strategic ties with the government of India, said that India’s role in establishing a lasting peace in Afghanistan is vital.

For the first time, the Afghan government and the Taliban are holding direct talks to end nearly 19 years of war in Afghanistan. On February 29, in the presence of Indian envoy in Doha, the US signed a peace deal with the Taliban aimed at bringing the warring parties to a power sharing settlement and end America’s military engagement in the country. Under the US-Taliban deal, the United States will withdraw its forces from Afghanistan by May 2021, in return the Taliban give counterterrorism guarantees. The American war in Afghanistan has been the longest in history of American military. The US has lost over 2,400 soldiers in Afghanistan since late 2001.

India is “very much on the loop”

With intra-Afghan negotiations underway in Doha, India has been following political development in Afghanistan. “There is no ambiguity about India’s Afghan policy, which is transparent, and is to engage with all sides of the political spectrum in Afghanistan. Abdullah’s visit should be seen in that context,” The Indian Express, wrote as quoting a diplomatic source.

Abdullah’s visit to New Delhi, as the source puts it, signals that “India is very much in the loop” in negotiations that began between the Afghan government and the Taliban in Doha on September 12.

India has been maintaining a cautious strategic friendship with the Afghan government amid growing Taliban influence in the country’s mainstream politics.

India’s foreign minister, Mr. Jaishankar at the opening ceremony of intra-Afghan peace talks in Doha, stressed that the peace process must be “Afghan-led, Afghan-owned and Afghan-controlled”. He said the peace process must respect national sovereignty of Afghanistan and territorial integrity of the nation must be respected. Jaishankar, addressing the Afghan delegation and Taliban representatives, said that peace process must ensure that Afghan soil will never be used for “anti-Indian activities”.

Abdullah’s visit to New Delhi follows his Islamabad visit. Last month, accompanied by a high level peace delegation, Mr. Abdullah paid a three day visit to Islamabad where he said the two sides—both Afghan and Pakistani—must move beyond “old policy, adopt a new approach and learn lessons from past.”

India is one of the largest aid donors in Afghanistan. Since 2001, it has funded projects worth of USD three billion which includes one billion aid for Afghanistan’s education sector.

The government of India has repeatedly said that peace process must ensure interest of minorities, women and Afghan Sikh and Hindu community, a community which is subject to worst persecution and violence.