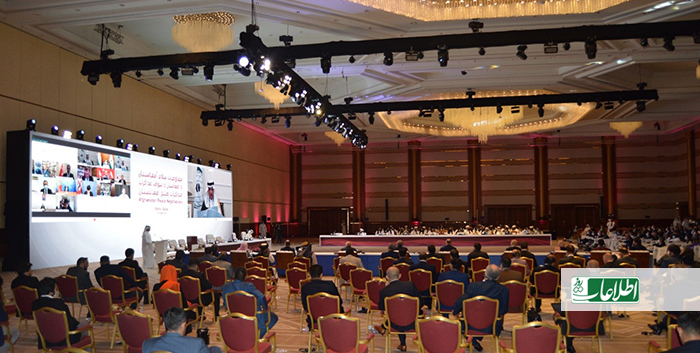 Negotiating teams yet to finalize procedures of intra-Afghan talks

Negotiating teams of the Afghan government and the Taliban have yet to finalize an agreement on procedures and principles of the intra-Afghan negotiations kicked off two weeks ago, September 12, in Qatari capital, Doha. Though both sides acknowledge existence of differences on finding a resolution to draw a negotiating procedure acceptable for the two sides, they express willingness to settle the differences and finalize the negotiations principles and procedures.

In the first week, Taliban’s suggestion to use “only Hanafi jurisprudence” and the group’s peace agreement with the United States to negotiate the main agendas of intra-Afghan talks were reported as main differences between the negotiating teams. Later, several government negotiators, however, confirmed that the first one was resolved.

Although both negotiating sides avoid providing details on their differences and developments made so far, sources from the negotiating team of the Islamic Republic of Afghanistan confirmed to Kabul Now that the differences on using “only Hanafi jurisprudence” was resolved between contact groups of the negotiating teams. The two sides have agreed to observe the rights, Shia personal status, principles of Shia sect and that of other religious minorities without any discrimination, which was suggested by the government negotiating team, according to the source.

In an interview with Kabul Now, Mohammad Nateqi, a member of government negotiating team, said last week that the Taliban negotiating team had not approved the resolution for the difference on using “only Hanafi jurisprudence” yet. Given the acknowledgement of Taliban political spokesperson, Mohammad Naeem, and information shared by Nateqi, both differences are still unresolved.

“We are not getting disappointed,” said Mohammad Naeem, spokesperson for Taliban’s political office in Doha, while confirming that no progress was made for reaching an agreement on negotiations’ procedures and principles.

For resolving the second difference which is still disputed even between the contact groups, the government negotiating team has proposed four alternative solutions:

First; both; the US-Taliban peace deal and joint declaration between the Islamic Republic of Afghanistan and the United States of America should be recognized as “principle” documents in negotiations between the two sides. The US-Taliban peace agreement was signed by US Special Representative for Afghanistan Reconciliation, Zalmay Khalilzad, and Taliban’s deputy leader, Mullah Abdul Ghani Beradar in Doha and the joint declaration was issued in presence of President Ghani, US Secretary of Defense, Mark T. Esper, and NATO’s Secretary General Jens Stoltenberg in Kabul on February 29. In the US-Taliban peace deal, the US has repeatedly asserted that it does not recognize the Taliban’s Islamic Emirate as a state while in the joint declaration the Afghan government is regarded as “member of the United Nations and recognized by the United States and the international community as a sovereign state under international law.”

The second alternative solution asks the Taliban negotiating team to do negotiations based on decisions made in the Peace Consultative Loya Jirga – Afghanistan traditional grand assembly – convened for release of 400 Taliban’s notorious prisoners on August 09 and the assembly’s resolution. Release of the 400 Taliban prisoners and Afghan security forces, an immediate ceasefire, end to war, and protection of values achieved over last two decades are the major demands raised in the grand assembly.

Deciding based on protection of the country’s “national interests” is the third and referring to Quran and Hadith is the fourth alternative solutions offered by the government negotiating team for resolving any issue that would raise during the negotiations between the two teams.

The two negotiating teams assigned a joint 10 membered contact group – five members from each side – to negotiate principles and timetable of negotiations as the result of first face-to-face meeting held between them on September 12 behind closed doors in Doha.

The contact groups have agreed to avoid using aggressive terms that may provoke irreconcilability during the negotiations and observe mutual respect. Another principle agreed between the two groups is that once the decision is made, it must not be violated and there will be not a second decision on the same issue. When the two negotiating teams reach a stalemate over an issue, a joint technical committee will be formed by the two parties to find the solution and present it in the general meeting of negotiators. Establishing a joint secretariat is also agreed between the two negotiating teams.

Contact groups of the two sides have agreed that the negotiating teams will continue negotiations with tolerance and no side shall leave the negotiating table until end of the session. Each negotiator needs to speak in turn, the meeting must be started and ended with recitation of Quran, no side has to disturb when the opposite side is talking and speak out of the context.

Before taking on the main agendas, the two negotiating teams must agree on negotiating principles, timetable, and agendas to be discussed. As stated by negotiators of the two sides, no third party will play role as mediator in negotiations over principles.

Contrary to what has been widely reported as change in Taliban’s mindsets and ideology, some government negotiators are now expressing it as not true. If right, this could be another barrier that makes the negotiations time-consuming and more complex.

“We had repeatedly heard that the Taliban are not those in the past, the Taliban have changed and reviewed many [of their ideological] issues. But whatever we see [of them] closely indicates that much of what was published and covered are far from reality,” said Hafiz Mansour, a member of government negotiating team.

Amin Ahmadi, another government negotiator, also hinted in his interview with Kabul Now last week that the Taliban are still adhering to their “inflexible interpretation of Sharia”. In an interview with TOLONews he stated that the Taliban are not using the same language in negotiations with government negotiators as they use while appearing in media, meeting with foreign officials, and delivering public speech. They have a language of monopoly, Ahmadi said of his understanding regarding the Taliban’s rhetoric in negotiations.