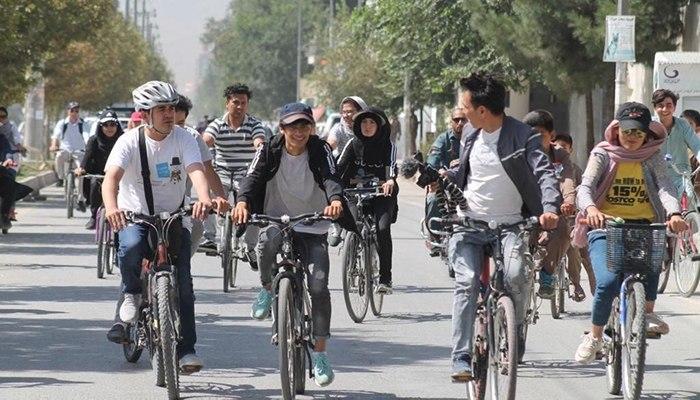 “Using bicycle does not only save time and money but also reduces air pollution. Fortunately, a large number of students and employees have started using bicycles to get to their universities and workplaces,” says Esmat Farzad who uses bicycle on daily basis in Kabul.

Esmat Farzad, who is a teacher at a private school in Kabul, says that in mid-May, when the city was locked down, he bought a bicycle and started using it instead of public transportation.

He has joined a group of cyclists who go cycling on Fridays. The longest trip, Esmat has had so far is biking to Sayad Bridge of Kapisa province which is 78 km far from Kabul. They go cycling to Qargha Dam every Friday morning.

Many youths resorted to bicycle during lockdown period in Kabul, a capital which hosts an estimated 6.5 million population. The nearly three months quarantine imposed on the city reduced air pollution in Kabul. Many including    Esmat Farzad and Hamid Omar chose to buy bicycles during this period.

Five months ago, when Kabul was placed under lockdown, Hamid bought a bicycle. What motivated him to do cycling was a clean weather. He first formed a small group of friends to do cycling around the city, but after they posted their photos on social media, new members joined the group of now 180 members.

“Many who previously owned unlicensed motorcycles have bought bicycles for the police would stop them while riding the motorcycles [due to security concerns],” Mr. Shinwari added.

According to the National Environmental Protection Agency, NEPA, nearly 30 percent of air pollution is caused by cars and transportation means.

Qasem Rahimi, spokesman for NEPA, says promoting a culture of cycling could be effective in reducing air pollution in the city. NEPA in coordination with athletes and civic organizations has worked tirelessly to encourage residents of Kabul to use bicycles, he added. Mr. Rahimi stated that most recently a cycling race took place in Darul Aman road, in which 100 cyclists competed.

Air pollution in Kabul is multidimensional problem and every citizen in Kabul has to work hard to reduce it, Mr. Rahimi emphasized.

Unlike many activities that were stopped during quarantine, cycling flourished in this period.

Haji Zalmai, who has been selling bicycles and its devices in Kote Sangi area for five years, says that his shop was shut for two months during the lockdown, but soon after he opened it, his business flourished.

Hamid says that at the beginning, only a small number of group members owned a bicycle and most of the members were borrowing a bike for cycling trip but now almost everyone in the group has their own bicycles.

He says that after he launched his group, many women have shown interest to join the team despite challenges they are facing. According to him, 40 percent of his team members are female. Saheba, Hamid’s wife, is also in the group.

Cycling has now become a daily routine for Saheba. In the past, she used to get to her university by public transportation but now she along with her friends use bikes to get to university. “Cycling saves my time and money. In the past, I used to get stuck in traffic jam for a long time and reach home late, but now it takes me only 30 minutes to reach home.”

Afghanistan is a conservative country and there are many restrictive social norms which make cycling unsafe for women even in urban areas like the capital Kabul. Women interest in cycling increases at a time when the Afghan government is negotiating a power sharing deal with the conservative Taliban.