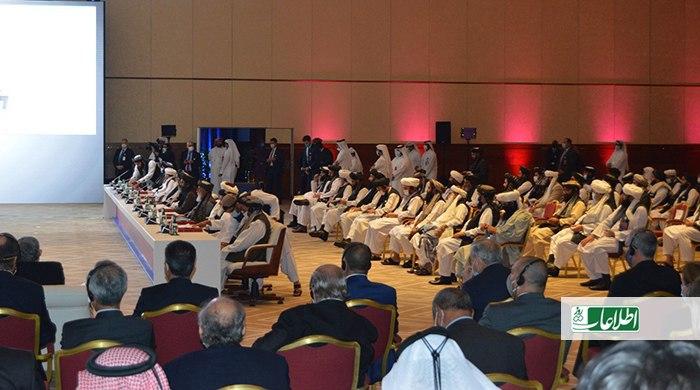 The Afghan peace talks is underway in Doha, capital of Qatar. On September 12, the opening ceremony of the talks started between the Afghan negotiating team and Taliban negotiators at Al-Dafna Hall of five-star Sheraton Hotel. Qatar’s foreign minister, Mohammed bin Abdurrahman bin Jassim Al Thani hosted the opening ceremony of the long delayed Afghan peace talks. A number of foreign diplomats including US Secretary of State, Mike Pompeo, US peace envoy, Zalmay Khalilzad, Russian’s envoy for Afghanistan, Zamir Kabulov, were also present on the occasion.

The peace talks between Afghanistan and the Taliban insurgents follow US-Taliban deal signed in February.

The Taliban side, led by Mullah Abdul Ghani Baradar, head of Taliban’s Qatar office, and Mullah Abdul Hakim Haqqani, the newly appointed chief negotiator for Taliban team, attended the opening ceremony of Afghan peace talks, which was scheduled to take place in March but was impeded over political differences on a prisoner swap arrangement between the Afghan government and the Taliban.

Foreign ministers of regional nations, including Turkmenistan, Uzbekistan, Pakistan, China, India, Indonesia, Japan, Turkey, and European countries, including Finland, Norway, Germany, Spain, and Britain addressed at opening ceremony through Skype. The foreign diplomats, who spoke on the occasion, urged Afghanistan’s warring parties to take advantage of ‘the historic’ event to find a long lasting resolution to end war and bloodshed in Afghanistan.

The two sides urged on durable peace and sustainable political stability in the country.

After nearly 18 years of fighting against the Taliban, the US government, under President Trump, opened direct talks with the Taliban. In October 2018, US peace envoy, Zalmay Khalilzad, held the first face-to-face meeting with Taliban representatives in Doha, Qatar. The US-Taliban talks continued for eight rounds. On February 29, the two sides signed a deal.

Under the deal, the US have to withdraw forces from Afghanistan within 14 months, the Taliban insurgents have to give counter-terrorism guarantees that will not allow any foreign terrorist group to use Afghanistan as launchpad to conduct attacks against US and its ally, announce a ceasefire and sit with the Afghan government on peace table.

Mr. Abdullah, speaking at the ceremony, underlined that Afghanistan’s will for durable peace is committed. He said that hard-gains the country has made over last two decades should be preserved in any power-sharing deal. The chairperson of Afghanistan’s High Council for National Reconciliation called for a ‘humanitarian ceasefire.’ “I believe that if we give join hands and honestly work for peace, the current war in the country will end.”

Mullah Ghani Baradar, a former Taliban detainee in Pakistan, who now heads Taliban’s Qatar office, quoted verses from holy Quran as he addressed the audience at the opening ceremony. He said the Afghan peace process will succeed if all segments of US-Taliban deal are fully implemented. The head of Taliban’s Qatar office reiterated on group’s long time demand: Islamic system of government.

The Taliban side underlined that they wanted an independent, developed and Islamic Afghanistan where all ethnic identities see themselves reflected.

US Secretary of State, Mike Pompeo, urged the Afghan sides to ‘seize the opportunity’ and secure peace in Afghanistan. The decisions you (the Afghans) make in the future will affect the size and kind of US assistance, Pompeo, addressing the Afghan factions, said.

China’s foreign minister, Wangi Yi, who addressed the audience through Skype, said Afghanistan’s peace process should be led by the Afghans—political factions, ethnic identities and minority groups should see themselves reflected in the process. China supports peace in Afghanistan, Mr. Yi urged.

“Ceasefire should be a priority. War and peace can never go [on a parallel move]. In this process, Afghanistan needs worldwide support. Turkey is ready to contribute to this peace process in many ways; we are ready to host next round of talks,” said Turkey’s foreign minister, Mevlut Cavusoglu.

Secretary Pompeo met with members of Afghan negotiating team and Abdullah Abdullah on the sideline of the opening ceremony. The government of United States will support people of Afghanistan, an Afghan peace negotiator told media as quoting Mr. Pompeo.

The intra-Afghan talks might take months, perhaps years, to reach to an inclusive conclusion. The two sides will have tough time and hard tones to come to terms with an inclusive resolution on a future political set-up to bring many political factions and the ethnically diverse Afghanistan under a united political umbrella.