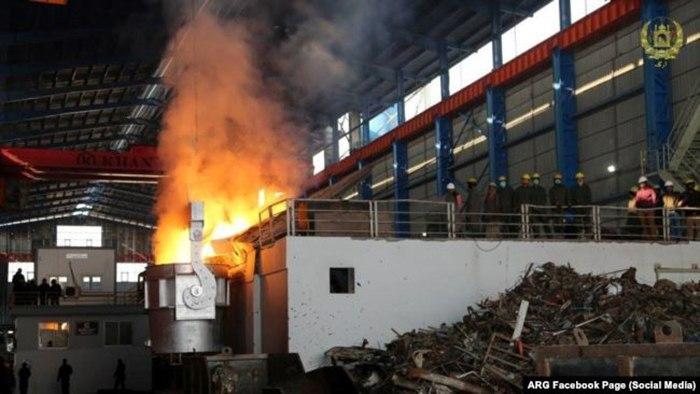 Image of an iron factory in Kabul
KabulNow·August 17, 2020

Workers are subject to a widespread exploitation in Kabul industrial park as labor law remains unimplemented. Majority of factory workmen, who are working in Kabul, have not signed job contracts, and under a laborious condition, they are forced to work for long hours with almost no safely measures and job security, as stated by labors association.

Over 700 factories are operating only in Pul-e-Charkhi industrial park of Kabul where around 40,000 workers and employees are busy providing services in 25 different sections, according to figures provided by Afghanistan Chamber of Industries and Mines (ACIM).

Asadullah Majboor, head of public relations at the National Union of Afghanistan Workers and Employees, says no attention has been paid to workers conditions for years. “The workers are being exploited in factories just like in earlier centuries (medieval ages) without any rules and contract. Though there are work rules and laws, they are just on paper and are not implemented by employers and factory owners,” he said.

He further went on to criticize the government of turning a blind eye on labor and worker association and not doing enough for resolving the issue within the country’s factories.

Reza Muntazir, has worked in different sections of Kabul industrial park, including iron factories, for four years now, says he has not been issued any job contract and the same thing goes with hundreds of workers in other factories. “They just take a copy of Tazkira (Afghan national identity card) and no other requirement is observed. Caretakers and key authorities, who are mostly Pakistani citizens, are doing whatever they want. They do not respect [workers’] rights and standards,” he said.

According to him, whenever the workers want to voice against such behavior they are humiliated and threatened by the caretakers of being fired.

A major challenge Afghan workers are facing is long working hours and low wages. Laborers are usually employed with an 8,000-10,000 Afghanis monthly salary. Some laborers say that they are sometimes forced to work for 16 to 17 hours a day in return for that monthly salary. As Reza stated, they are not paid extra payment despite working for 16 hours a day.

Afghanistan labor law officially sets 40 hours’ work for a week or eight hours a day. It further obliges the two sides to struck a written contract in which the worker has to be entitled certain privileges and wages in return for doing duties indicated in job description part of the contract.

The law further stipulates that the title of the contract, type of employment, wage, employee’s privileges, working hour and shift need to be set in accordance with Afghanistan’s labor law.

Rahman Tawana, a graduate of social science, is another laborer who describes working requirements in Kabul industrial park as unexpected, adding that he has endured only one day working with an iron melting factory. “It was intolerable and unimaginable for me. The workers are abused and they cannot complain for being compelled. The workers neither have enough time to sleep nor for serving their meals. They are not treated humanely as well,” he described the work environment in Kabul industrial park.

Workers are also skeptical of safety measure and hygiene in work space in industrial parks.

Mohammad Juma, a worker, complains that he has been wounded many times while working in a factory but the factory’s authorities have not paid attention to his injuries and health. Reza who has the experience of working with iron factories notes that the laborers are highly vulnerable to the danger of becoming disabled or even dead for carelessness of the employers. “Even worker is exposed to fall inside blast furnace and get melted. Such dangers exist. Some [deadly] incidents remain hidden.”

Contrary to the labor law which call for providing a safe environment, health protection, vocational trainings, and boosting up technical skills, Afghan workers are not given health insurance and hygiene is not observed in their work environments as required.

Omid Fazli, who is public relation officer at Maihan Steel, an iron melting factory, acknowledges that there is no first aid facility despite risks existing in the factory and workers might get wounded while working.

As an urgent need, he calls on the government to establish a first aid facility in the industrial park.

He, however, rejected the workers complaints saying that all their needs are met and that they have only two cases in which workers got disabilities while on duty over past two years. Mr. Fazli added that the two cases were addressed, noting that they have not had any dead cases so far.

“Out of around 350 labors working for Maihan Steel iron melting factory, only 40 of them do not have employment contract,” Mr. Fazli stated, rejecting that workers are working for 16 hours a day.

The Ministry of Labor and Social Affairs (MOLSA) is responsible for monitoring implementation of the country’s labor law. The ministry’s spokesperson, however, did not respond to Kabul Now’s question regarding the issue. Workers and labors association blame the MOLSA for falling short to implement the law and provide standard requirements for the workers.

Sakhi Ahmad Paiman, deputy chairperson of the ACIM, also noted that the MOLSA is responsible for providing standard work environment and is liable for failing to implement provisions of contracts between employers and employees. According to him, the workers are forced to work in such a harsh condition for lack of employment opportunities in the country.

According to Mohammad Karim Azimi, executive director at Kabul Chamber of Mines and Industry, harsh condition is perhaps applied to workers who are employed in groups containing 20-30 workers. He added that such workers are not directly hired by the employers and those who sign general contracts on behave of the workers are responsible for the harsh conditions.