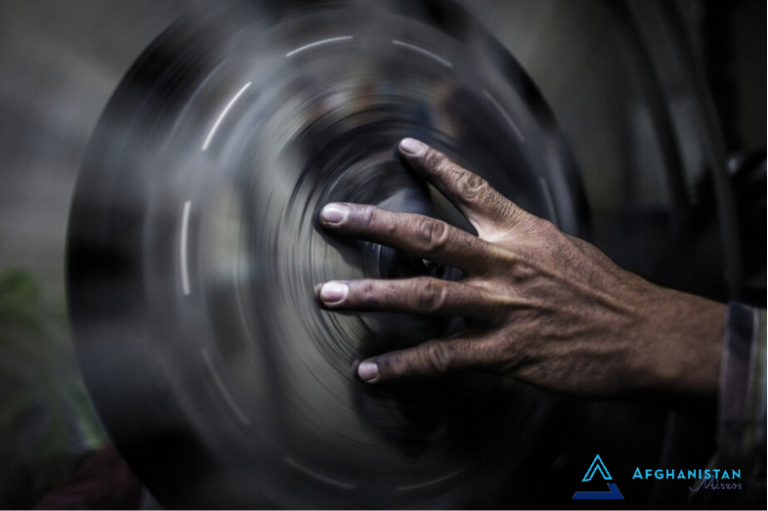 The new epoch of Afghan film, in the post-Taliban era, was marked by Osama, a film directed by renowned Afghan film maker, Sidiq Barmak. Technically advised by Muhseen Makhmalbaf, an Iranian exiled director, Mr. Barmak, in this film, tells the story of a young girl who disguises herself as a boy and works outside home during the Taliban rule in Kabul. Powerfully narrated, Osama shows a painful story of Afghan women under the hardline extremist regime of the Taliban in Afghanistan. It was produced in 2003 and won critique acclaim and international awards.

A number of Afghan films makers, mostly expatriate, mushroomed in Afghanistan as the country welcomed foreign aid, democracy, election and international community back in 2002. This new generation of Afghan film makers, struggling for a bright future, produced several films with new themes oft-dealing with a bloody past and trying to heal the wounds left by the 1990s civil war and Taliban repression or highlighting women affairs, social relations and cultural affairs raised in a new context completely different from old milieu.

Fire Dancer, directed by Jawid Waseel, An Apple from Paradise, directed by Homayun Mourowat, and Hava, Maryam, Ayesha, directed by Sahra karimi were the top films produced by the new generation of film makers, which won international awards. Films produced in this period told stories of war, migration and reconciliation to a new age and new value of life.

History of cinema in Afghanistan

A treasured luxury for the Afghan elite and royal family in early 20th century, King Amanullah Khan was the first Afghan ruler who brought the first film projector to Afghanistan in 1921. Influenced by his first Europe tour as an Afghan king, Amanullah was in love with modern idea of development. The progressive Afghan king set up a film projector in Paghman, a cool green village ideally located in the northwestern neighborhood of Kabul, inviting his friends to watch short black-and-white films mostly produced by western and Indian producers. Later the king hired film crews to cover his official trips to foreign countries.

The then Afghan elites, interested in culture of watching films, motivated the first generation of film makers to make films about Afghan issues and questions. Eshq wa Doosti, literally means love and friendship, was the first Afghan film produced and premiered in 1946. Written by Rashid Latifi and Harold Levis, this film is a 43-minute musical drama, which tells story of two friends, a poet and an old captain, who are in love with Maryam. The captain knows nothing about the poet’s love affairs. He asks his friend to ask Maryam’s hand in marriage for him (the captain). The poet struggles to choose between love and friendship. He wins both love and friendship at the end of the story. Most scenes of the film is shot in Lahore, Pakistan with Indian music mixed with Persian lyric in the background. As the first try in the history of Afghan film industry, Eshq wa Doosti won acclaim published by the Daily Anis in September 1946.

Under King Zahir Shah, the Afghan government, established the first Afghan film facility, officially titled as The Afghan Film. The Afghan film facility, novice as it was, produced some newsreels and covered international trips of the King in the early steps of its production and creativity. Later it focused to produce films which were promoting the idea of Afghan nationalism.

Rozgaran, literally means the ages, The Suitor, Friday Night, and Smugglers were produced by the Afghan film facility during 1960s and 1970s.  Broken Glass, and Andarz e Madar, means mother’s advice, were also produced during this period.

The Soviet-trained generation of Afghan film makers changed the face of the country’s film industry. The April coup d’état of 1978 and regime change brought a new rhythm in the history of Afghan film. With a socialist theme, Jenayatkaran and My Love, My Country won applause in Cannes Film Festival, France and Moscow film festival in 1979. Jenayatkaran depicts social inequality and misuse of power by higher authorities and the later tells a similar story, narrating life of a poor university student who works part time at a restaurant to support him continue his studies.

Many films produced in 1980s in one way or another promoted state ideology in an awkward way. Notable among these stands The April Revolution which tells the tale of Saur coup with Hafizullah Amin, the then president of Afghanistan, playing the role of protagonist. Facilitated by the Afghan Film, Daud Farani directed The April Revolution. It was not premiered, however, for political reasons. Heroism and social justice mixed with a notion of sovereign socialist country make themes most film produced by Afghan film makers in 1980s. Marda ra Qawl As, literally means men do not break their promises, is a fine piece which shows the peak in the Afghan film industry as told by most Afghan film critics.

The once progressing film industry in Afghanistan declined after Mujahedeen rival factions took over Kabul in 1992. Cinemas in Kabul begin to show Pakistani action movies and Bollywood chivalry films to feed passion and imagination of Afghan youths who were enthusiastic to know more about mysteries of life and love.

To demoralize people and quash public passion for watching movies, the Taliban regime hanged a television set on a Kabul street when they took control over the war-torn capital. With most of them coming from a rural primitive background, the extremist madrassa students were against all form of arts. They banned TV and music, declaring that anyone found watching movie or listening to music, would be punished in accordance with sharia law. The Taliban regime set ablaze government music and film archive and destroyed reels of Jenayatkaran and My Love, My Country.

Taliban harsh sharia law, though tightly implemented in urban areas, failed to stop people of watching Hollywood action and romance films.  Individuals in Kabul and Mazar-e-Sharif would watch movies in secret places though their religious police did punish sharia-breakers to control people and guide them towards a self-styled religious order under which women were not allowed to go outside home unless accompanied by a male relative. Men were forced to keep long beard, young boys were forced to wear turban and young girls were forced to wear burqa.  With the country is preparing for a power sharing settlement with hardline group of the Taliban, Afghan film production is on the brink of collapse while government and international priorities are focused on peace policy and Afghan peace process. Influenced by new trends in world cinema, some Afghan film directors put efforts to break up hollow influence of Hollywood and Pakistani film industry on Afghan Film productions but little has been achieved as they remain highly dependent on international aid and government support. The fate of Afghan film industry, similar to fate of the nation, is on the threshold of another change which may push it back to a retrograde cycle.