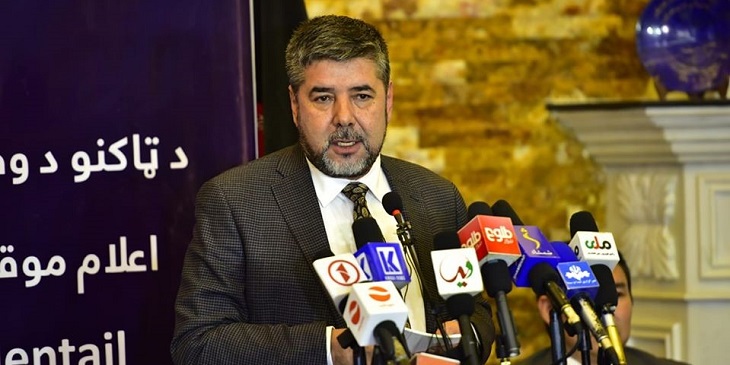 In his latest presser, former chief of the National Directorate of Security (NDS), Afghanistan’s spy agency, Rahmatullah Nabil raised doubt over intention behind efforts of the US peace envoy, Zalmay Khalilzad, regarding deal over national interest of Afghanistan in peace talks with the Taliban. This comes as Khalilzad departed Washington on July 24 to travel to Doha, Islamabad, Kabul, Oslo, and Sofia.

Indirectly pointing to US, Pakistan, Qatar, and Khalilzad, Nabil asserted that the people of Afghanistan were sidelined in the peace process and “other countries and individuals” were making decision regarding the country’s fate. “I have the right to ask questions about Afghanistan’s [national] interests and express doubt. He (Khalilzad) should not introduce me as enemy of peace for expressing this doubt,” the former Afghan intelligence chief noted. Describing Khalilzad as “architect of the Bonn process” he further went on to raise question that why the Taliban and Hezb-e-Islami were sidelined at Bonn Conference held in 2001.

Criticisms against the peace talks, particularly over the US-Taliban peace deal signed on February 29, have increased for the deal failed to contain the Taliban violence across the country. In addition to scores of Afghan forces, hundreds of civilians have lost their lives to Taliban violence since then. Bolstered by what US military officials repeatedly spoke of Taliban’s oral commitment and that all sides reduce violence by 80 percent, many expected a significant reduction of Taliban violence after the peace deal. The condition on the ground, however, has proved otherwise. In latest incidents, local officials in the southern Urozgan and Helmand provinces confirmed to Kabul Now that six security forces were killed and three Afghan soldiers wounded in Taliban’s attacks – Taliban infiltrator attack in Urozgan and two car bombings in Helmand. Office of the National Security Council (ONSC) said in a statement issued yesterday, July 25, that the Taliban militants killed 36 civilians and wounded 93 others in Afghanistan over last week.

US officials, particularly Khalilzad, have also acknowledged the heightened violence after the US-Taliban peace deal in repeated remarks. In a life discussion with Afghanistan, Uzbekistan, and Kazakhstan ambassadors hosted by the US Institute of Peace (USIP), Khalilzad asserted that the US was not satisfied with the “too high” level of violence still continued in Afghanistan.

According to Nabil, Afghans are being sacrificed by the issues related to the US upcoming presidential elections with much roles have been given to Qatar and Pakistan in the Afghan peace process. Moreover, he raised concerns that Afghanistan would become a confronting spot between regional powers. “We were the center of confrontations between US, its allies and the region, Pakistan on the lead, over past 20 years. This time the regional countries would also confront over exerting control on Afghanistan,” he asserted, adding that some countries would raise the ISKP flag instead of the Taliban and Iran would raise flag of its proxy militia, the Fatemyoun division, in Afghanistan.

The former spy chief is of opinion that the Taliban have gained unexpected power through legitimacy provided for the militant group over past two years – through direct US-Taliban talks.

Since the start of US-Taliban peace talks in Doha, the political leadership of the group, sometimes led by the group’s co-founder and deputy leader Mullah Abdul Ghani Baradar, have paid visits to a number of countries, inter alia Pakistan, Russia, China, Iran, Uzbekistan, and Gulf States. During the visits, they have met with some high level officials of the countries discussing key issues of Afghanistan even beyond the peace process, like repatriation of Afghan refugees, as per account of the Taliban spokespersons. Earlier in March, Mullah Baradar and President Donald Trump held a 35 minutes long telephone call. Trump described it as a “very good talk” during which the two sides agreed that there is no violence and no side wanted it.

Despite critical differences between the government and the Taliban on sitting across negotiating table and drastic increase in Taliban violence, the US is hopeful of starting the intra-Afghan negotiations in near future. “The parties are closer than ever to the start of Intra-Afghan Negotiations, the key next step to ending Afghanistan’s 40-year long war. Although significant progress has been made on prisoner exchanges, the issue requires additional effort to fully resolve,” part of the statement released by the US Department of State reads.

In his remarks at the USIP hosted event, Khalilzad also stated that intra-Afghan talks have never been so close, describing it as important moment for Afghanistan and the region.