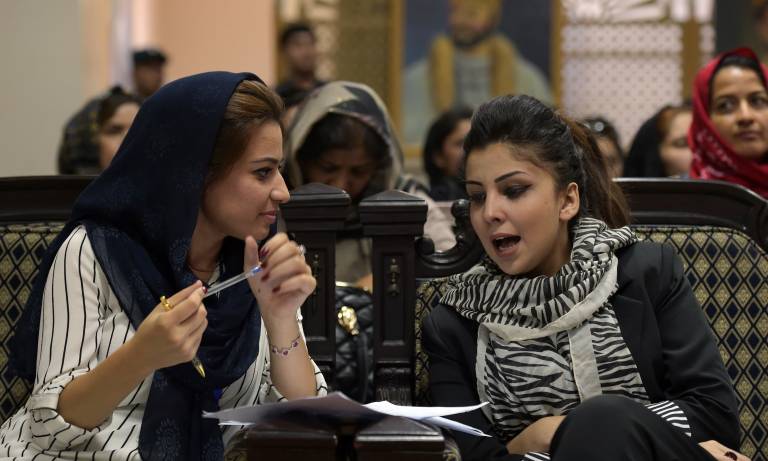 “Most men do not call them by their names because they think women are nameless objects,” says Maryam Sama, an MP who represents Kabul in the Afghan parliament. “We try to include mother’s name in birth certificates,” she wrote on her Facebook account.

The debate comes after a social media campaign, urging the Afghan men to refer their wives and mothers by their names in public, drew attention.

After the fall of the Taliban regime, though some gains and achievements were made, women participation in country’s politics and their presence in national institutions remain low. In 2014, a number of Afghan women in urban areas launched a campaign demanding the Afghan men to refer to their mothers, wives and daughters by their names.  In 2017, a relatively sizable women rights activists joined the campaign with hashtag: “#WhereIsMyName?”

The campaign has now been brought to the Parliament, Afghan Legislative Assembly. Nahid Farid and Maryam Sama are among the MPs who staunchly support the campaign.

Identification politics in Afghanistan has long been influenced by tribal politics. In tribal Afghan culture women are not called by their names as they are considered as creatures who are traditionally bound to serve the dignity of family or tribe. Most traditional Afghan men refer to women as daughter of, wife of or sister of a man. They have a deeply tribal approach and attitude towards women. In early 20th century when King Amanullah Khan, Afghanistan progressive king, announced that Islam did not require women to veil and tribal customs must not be imposed on the free will of individuals, a large number of conservative Afghan mullahs and tribal elders resisted against his ideas violently.

“Afghan women have struggled to make progress in the country over last years, but they still don’t have an identity,” MP Sama said. She called on MPs, especially the parliament speaker, to respect the will of women and to revive their identities by considering the issue of including mothers’ names in their children’s identity cards.

The speaker has welcomed the proposal.

It is almost uncommon for women, especially married women, to be called in public by their names. In some parts of the country, calling a woman by her name is even considered a disgrace to men and their families. Many men refuse to take their sister’s, wife’s or mother’s name in public. This social custom is so deeply rooted in the Afghan society that female’s name is not even mentioned in wedding invitation card or gravestone.

Jawad Sultani, a university professor, believes identity is a key requirement of social life. “Social identity will not be constructed until we respect it.”

Veda Saghari, who is a widow mother, says that she faced many challenges to get identity card for her children after she divorced her husband. Even though I provided every requirement my children needed, the law did not allow to issue identity cards for them under my name, she told Kabul Now. “The father of my children refused to cooperate and give me his original copy of ID card. I was forced to go to many people [for assistance] and finally under bail and guarantee, I got ID cards,” she said.

Ms. Saghari has faced the same challenge as she faced while acquiring ID cards when she applied to get passport for her ill child. “My child was ill. The passport department refused to issue him a passport, saying that they would not break the law.”

In 2014, Ms. Veda Saghari was one of the first women, who initiated a campaign, demanding Afghan men to respect women identity.

On July 05, 2017, Laleh Usmani, a woman rights activist in Herat, joined the campaign Where Is My Name. Ms. Usmani along with a number of her friends launched campaign to encourage Afghan men to respect women identity.

Though the Afghan government announced that names of mothers would be included in the IDs, no practical step has been taken in this regard as yet.

Maleka Qasemi, a female who supports the campaign, says, “Before considering my identity of being a girl, a mother or a woman, I am a human and like every man, I have my own identity.”

Supporters of the campaign believe that mentioning mother name in birth certificate would help women to gain more self-confidence and achieve their civil and social rights.

Amir Gul Shahin, head of the Parliamentary Committee on Religious and Cultural Affairs, who supports the campaign, says from a religious point of view, there is no problem against women names being called or mentioned. “Every person’s name is his or her identity and should be recognized, not denied.”

Omar Nasir Mojadadi, a member of parliament’s religious and cultural affairs committee, says to have a name is the basic natural rights of every human being. “A number of women like to be called by their names because it makes them to be identified independently,” he said.

The campaign “where is my name” shows that the educated urban Afghan women have come a long way in a country where politics and power are traditionally shaped by tribal elders and tribesmen yet the road to seek the right to identity is long and bumpy. The campaign comes at a time when the Afghan government, under pressure by the United States, is preparing to negotiate a political settlement with the Taliban, a political armed group which has a long record of violating basic women rights. The Taliban leaders and fighters have a customarily tribal attitude towards women. Over last 17 years, under accusation of extra-marital affairs or eloping, the group have lashed, tortured and even in some cases stoned to death many women in different provinces of the country.