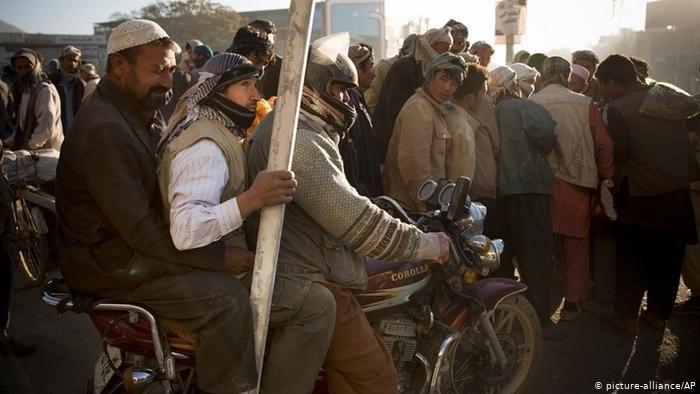 “We would make some savings during spring and summer seasons when labor demand was better. But I’m worried about the [upcoming] winter,” says Mahmood, a daily wage worker in Kabul. Like hundreds of his fellow laborers, he has lost his income source following outbreak of the coronavirus and lockdown in Kabul. Mahmood is the only breadwinner of his 10 membered family.

In addition to the daily wage workers, who are estimated to form majority of Afghanistan population, the Covid-19 outbreak and its subsequent consequences have also economically hit the graduates with high education degrees, who are mostly coming from the middle class. Although it was hard for Afghan university graduates to find work in their related field of study, the coronavirus outbreak has added to the strife.

With a Master’s degree, Ali Tawana is one of those Afghan graduates and job seekers who have strived hard to find a job but in vein. According to him, he has looked after work at every private and state run agencies for a year now but to no avail. The long-awaited opportunity for Tawana now seems more unachievable as many organizations have been subjected to downsizing and removing some posts as the result of harsh consequences of Covid-19 outbreak on the job market.

Mohammad Amin Mottaqi, another graduate, has lost job opportunity which he could provide after exerting many efforts and going through paralyzing difficulties in Afghan institutions marred with fraud and corruption. “Corruption is prevalent not only in state run institutions but also in private agencies. The merit is not important in employment process at all,” he says of his experience about job seeking.

Muttaqi finally could succeed in securing a teaching job through his personal connections at a private university. He, however lost his job when the universities were closed to prevent further outbreak of coronavirus in the country. Now the Afghan graduate says that he is thinking of how to provide the very basic needs of his family.

To reduce spread of the virus, the government imposed movement restrictions outdoor and placed major Afghan cities under a lockdown nearly four months ago. Though the lockdown was relatively implemented well roughly for a month, the citizens couldn’t endure its extension for most of them are highly dependent on their daily wage earnings. Therefore, they got out and started their routine businesses in crowded streets as before. Most of public and private companies with large number of employees, however, have still remained obedient to the lockdown restrictions.

Official at the National Union of Afghanistan Workers and Employees (AMKA) – abbreviated for its Persian title – estimates that the unemployment and poverty rate have increased by twofold during the nearly four-month period. “If the government does not manage the growing unemployment rise, the country will face with hunger crisis in upcoming winter,” warned Assadullah Majboor, AMKA Chairman.

According to the AMKA official, all Afghan workers from every spectrum of the society have been negatively impacted by the harsh economic consequences of the coronavirus outbreak. He says that coupled with insecurity, the outbreak has caused 60 percent of manufacturing factories to face with bankruptcy in Kabul, Herat and Nangarhar provinces.

Pointing out to a figure issued by the Ministry of Economy (MoE) that estimates 60 percent of Afghans eligible for work are jobless, Majboor added that the unemployment rate was raising considering the status quo. “According to the Ministry of Economy, 16 million Afghans are eligible for work of which nine million were jobless in past years. We can say now that the unemployment has increased by twofold to 18 million persons with no job,” he noted.

According to the MoE, Afghanistan’s economic growth has dropped by four percent this year as the result of the coronavirus outbreak. This will increase the poverty rate also by seven percent causing 61.7 percent of the country’s population to live below the poverty line, as per accounts of Suhrab Bahman, the MoE Spokesperson. “The unemployment rate which was 24 percent last year has now topped 35 percent which increased the poverty,” the MoE official asserted.

The National Statistics and Information Agency (NSIA) has not launched a new survey on the life condition of Afghans but its Multidimensional Poverty Index launched on March 31, 2019, suggests that over half (51.7%) of the country’s population are poor.

MP Mohammad Hashim Khan and Aziz Rafieee, a member of Afghan civil society organizations, meanwhile, estimate the unemployment far higher that the official figures. “More than 80 to 85 percent of the country’s population, particularly those living in major cities, we think, are now living below the poverty line,” estimated Aziz Rafiee, head of Afghanistan Civil Society Forum.

Despite a very dark perspective at sight, the Afghan government seems have no plan to reduce the negative impacts of the outbreak and take the least required preparation for the upcoming winter to help the public welfare. Last year, the Ministry of Labor and Social Affairs, announced that it had developed a scheme of sending Afghan work forces to foreign countries with high demands of labor forces. As per account of AMKA’s head, no one has been sent to any country through the scheme so far, doubting that it looked much like a “game” played by the officials.

In a statement issued on July 08, the MoE said that it had prepared and proposed a supporting financial package for small and medium businesses to the High Council of Economy and to the cabinet for approval. It further said that the government would also pay attention to financial losses of the private sector caused as the result of the coronavirus pandemic outbreak.