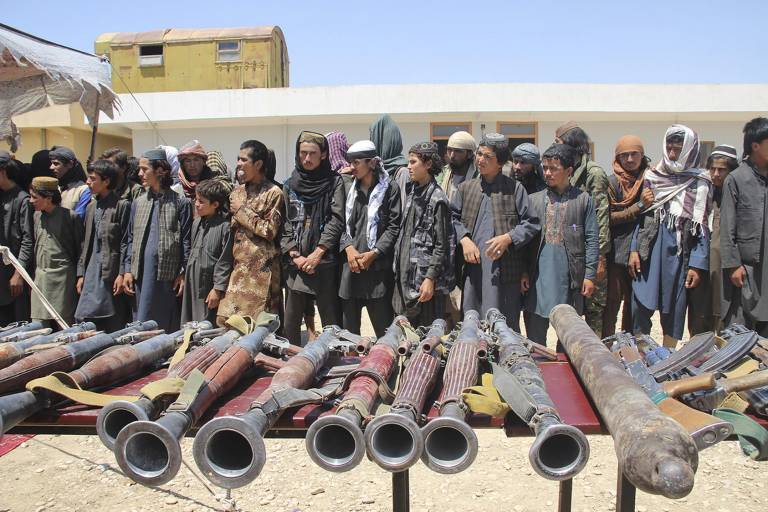 More than 250 Islamic State fighters turn themselves in to the Afghan government to avoid imminent capture by Taliban insurgents, in Sheberghan, Afghanistan, August 01, 2018. About 100 were younger than 18, Afghan officials said.
KabulNow·June 21, 2020

“The Bourgeois Jihad”: a critical review of a USIP study on ISKP

The United States Institute of Peace (USIP) recently published a study report by Borhan Osman titled “Bourgeois Jihad: Why Young, Middle-Class Afghans Join the Islamic State.” Although description outweighs analysis in the study, it is a crucial contribution to the amassing literature on the Islamic State of Khorasan Province (ISKP), filling gaps on how its cells in Kabul operate, how they recruit, where they recruit from, and more socio-economic light on their recruits. The research has some shortcomings, too, and will be highlighted in the latter part of this review.

First of all, the research has immensely benefited from Mr. Osman’s decade-long research on Islamic extremist groups in Afghanistan, particularly where it explains the ideological ground on which the Islamic State of Khorasan Province (ISKP) is based (pp. 6-10). The element of ideology, i.e. Salafi Jihadism, provides a rich explanation when juxtaposed next to other important elements, like grievances, in the process of radicalization. This, indeed, is one of the strengths of this research because it links the latest generation of jihadists to the legacies bequeathed to them by the decades-old radical ideologies in the region, going at least to al Qaeda in 1980s, if not much farther in history.

For a critical reader, this conclusion is ensconced in ambiguities in two ways.

Moreover, the report draws on primary data from a big number of interviewees. A total of 65 people, mostly men (8 women) who have either been a member of the ISKP or closely linked to them, have been interviewed. Using the data elicited from these interviewees, the author lays out a portrayal of ISKP cells in Kabul that answers, to a large extent, many of the questions about and around the phenomenon: demographic composition, logistical chains, links with other terrorist groups, and push and pull drivers that draw youths to ISKP.

Nevertheless, this research could have been much richer. For one, the extremely rare opportunity of having access to these many informants, most of whom ISKP members, could have been used more fruitfully were a mix of qualitative and quantitative tools used. This is important because it could substantiate many of the claims and conclusions that now remain too general and vague. For instance, the research draws a sweeping conclusion that a significant number of the ISKP members in Kabul cell are urban, educated, middle class and non-Pashtun youths (pp. 11-13). For a critical reader, this conclusion is ensconced in ambiguities in two ways. First, it remains unclear if based on the findings of this study the author attempts to generalize it to the whole Kabul cells and the how generalizable these findings can be. More details as to how many of them were educated in which fields, how many of them were rural or urban, their age group, et cetera would enrich the report way more than it is. By not talking about fighters of Central Asian and other ethnic backgrounds, the report runs the risk of portraying a less accurate picture of this terrorist group. Second, other explanations in the study lend ambiguity to the findings. For instance, most of these interviewees hail from Parwan, Panjshir and Kapisa provinces, largely rural except their capital centers.

There are several cases where the report would greatly benefit from specific details. For instance, when talking about where in Kabul these cells are based, he vaguely writes “west of Kabul” (p. 8), leaving it up to the conjecture of the readers to imagine where exactly these cells are. This is important because large parts of west of Kabul is predominantly populated by the Hazaras, a community of Shias who are among the top targets for the ISKP as the report also asserts. If these cells are based within the Hazara communities, this begs many other questions that are not discussed in the report.

Another instance is when the author talks about the role of girls in radicalizing male members of their household, or at least encouraging them to join the ISKP (p. 13). Given the cultural context and the rigidly patriarchal context in the three mentioned provinces, two questions remain unanswered. First, do girls really have that much of an influence in households in these provinces? Second, if these girls went to madrassas, most probably the male members of their households went too. So, how did girls play a decisive role in encouraging them to join the ISKP? And all the while, it remains unclear whether this was true for all the eight girls interviewed or for some of them.

Most crucial than all, the report reveals that those who were not involved in a particular attack were kept in dark about it (p. 9). Although it is understandable that this has been used for maximal protection, the shadow that it casts on the validity of the information elicited from the interviewees is significant. What if all their information about ISKP in general and ISKP cells in Kabul is extremely limited and unrealistic due to such limitations? Although this ostensibly seems not to be the case, one cannot entirely rule its likelihood out. With that in mind, the reader can legitimately doubt other information of the study.

Another area where the study could possibility benefit from more precision is topic and the focus of the study within that topic. It would be greatly helpful if the author more clearly laid out the current status of ISKP in Afghanistan, in which provinces it operates, and if and how they are linked to one another. Then, study would be focused on Kabul cells, helping the reader understand the Kabul cells in relation to the entirety of the phenomenon in the country. In terms of its focus, the study fails to draw a clear line between ISKP Kabul cells and other ISKP groups in the rest of the country, making it confusing when it comes to the conclusions. This particularly is perplexing when the new recruits are invited to the hideouts in eastern Afghanistan, and how the cells therein help in attracting these youths to the ISKP.

Lastly, the possible solutions and recommendations are uncomprehensive and too general. More specific recommendations would be more helpful. While it sounds good to work towards “pluralism with a space towards religious conservatism,” “constructive engagement with radical ideas,” and “meaningful youth dialogue” as elaborated in the conclusion, the main challenge is how these lofty ideals could be achieved. The study clearly reveals that three of the country’s most popular universities have served as places for radicalization and possibly recruiting of youth in ISKP, in the solutions nothing workable is mentioned about these institutions. The discussion about these universities also remains shallow and possibly riddled with some inaccuracies. For instance, the study also states that the Afghanistan’s intelligence agency arrested three Kabul University lecturers for extremist preaching in 2019 (p. 8), but based on personal observation of this author who was a student of Kabul University in 2016, at least one lecturer was arrested in that year on accusations of recruiting for the ISKP.

All in all, the study is a worthwhile contribution to the literature on ISKP in Afghanistan, helping fill important gaps regarding its Kabul cells. It could have been improved much more were a better methodology used, more analysis added, and the questions raised above addressed. From this perspective, having been granted access to these interviewees is a rare and precious opportunity that is missed.

Bismellah Alizada is the co-founder of Rahila Foundation, an organisation working for youth empowerment through education and capacity building. He is the Deputy Director (on Academic Sabbatical) at Organization for Policy Research and Development Studies (DROPS), a research and advocacy organization based in Kabul. Mr. Alizada is currently doing an MSc in Violence, Conflict and Development at SOAS University of London. His articles have appeared on Global Voices, the Diplomat, the Institute of Peace and Conflict Studies (IPCS) in New Delhi and Aljazeera English. He has also co-translated into Persian the book China in the 21st Century: What Everyone Needs to Know. You can reach him @BismellaAlizada.