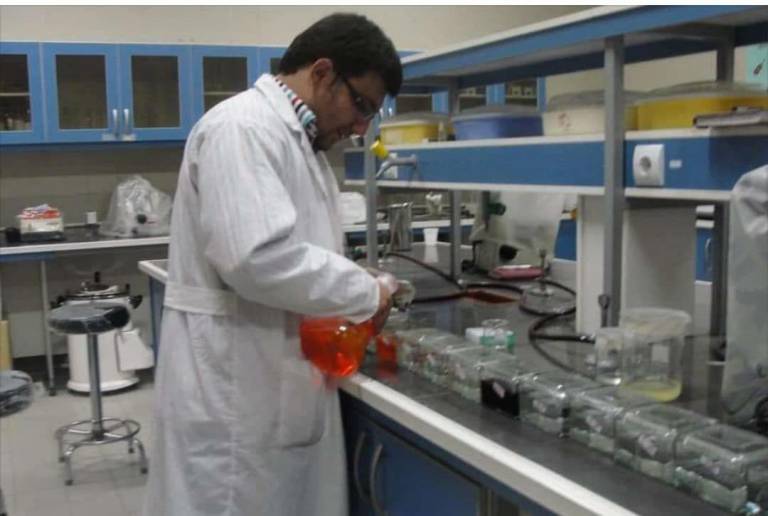 Sayed Hussain Mosavi while working in a lab in Iran
Fatema Hosseini·April 21, 2020

The call by a group of volunteer comes at a time when Afghanistan is struggling to battle the rapid outbreak of Covid-19 throughout the country. The Afghan capital, Kabul and other major cities are under lockdown, with food prices and unemployment rate are on rise.

The latest official record shows that 1092 people have tested positive for coronavirus. 36 patients, infected by the virus, have died and 150 others have recovered. But the actual number of Covid-19 patients is believed to be far higher than the figures announced by the government.

The Afghan public health minister, Ferozuddin Feroz, on Sunday, April 19, announced that the government would make 100,000 beds for isolation of Covid-19 patients. He underlined that the total amount of 15 million USD, allocated to fight outbreak of coronavirus, were spent. According to Minister Feroz, a large amount of the budget has been spent on construction of a hospital for Covid-19 patients in Dar ul Aman, Kabul, and the remaining amount of budget have been spent for purchasing medical equipment including testing kits for Kabul and provinces.

Local health authorities in Balkh, Herat, Faryab, and Daikundi provinces complain about shortage of testing kits, ventilators, and protective gears. Reports suggest that 110 health workers—doctors and nurses—working in various Afghan provinces have tested positive for coronavirus. Authorities say that most health facilities are underequipped therefore testing process takes a long time. According to official report, the government has syphoned 800 million afghanis to provinces for the fight against the fatal pandemic that have taken many Afghan lives so far.

Mosavi, who has worked in the field of bioinformatics and has “many publications on international scientific journal including WHO,” looks confident to help his country at this testing time to fight the outbreak of Covid-19.  “Before the outbreak of corona, we designed some RT Real time PCR kits to test various pathogens including malaria and Leishmania. I believe the same method would work for testing the coronavirus,” he says.

With an estimated 36 million population, Afghanistan is dependent on foreign aid. The country is facing a hard time as at a time it battles a polarizing political crisis and corona outbreak.