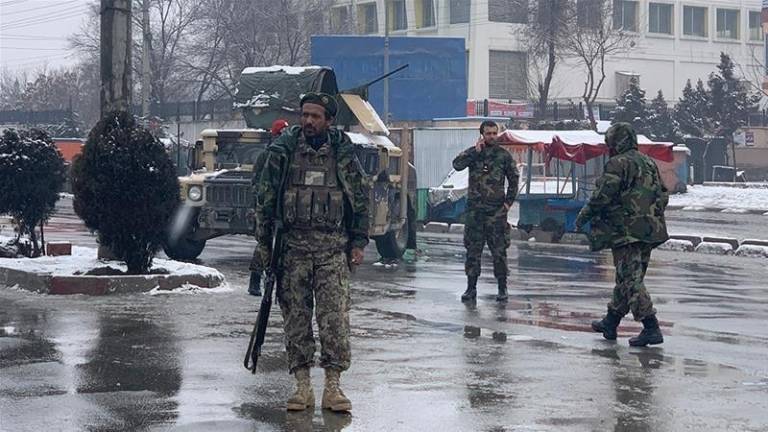 Afghan security forces in the aftermath of attack, Kabul
KabulNow·February 11, 2020

Six people, two civilians and four Afghan forces, were killed after a suicide bomber detonated his explosives outside Marshal Fahim National Defense University, Afghanistan’s military academy. The blast took place at around 07:00 am this morning, February 11, in PD5 of Kabul city, the Ministry of Interior (MoI) confirmed.

According to the MoI spokesperson, Nasrat Rahimi, five civilians and seven military forces were wounded in this suicide bombing.

The casualty toll may raise.

The Ministry of Defense (MoD), has said in a statement that five Afghan army soldiers and one civilian have been killed and six others, including a civilian, have been wounded in the attack.

So far, no group have claimed responsibility for the attack.

The attack came ahead of a peace deal that is likely to be signed between the US government and the Taliban militant group.

On the other hand, the MoD said in a separate statement that 172 Taliban fighters have surrendered to Afghan defense and security forces in Herat and Ghor provinces. According to statement, five commanders of the groups namely Abdullah, Nassruddin, Mohammad Yousuf, and Mullah Sarwar are among those who have surrendered.

The MoD details that 592 Taliban militants have surrendered to government forces during the last month in Shahrak district of Ghor province, Chesht-e-Sharif district of Herat province, and in Faryab province.

The Taliban spokesperson, Zabihullah Mujahid, however, has rejected surrender of the group’s fighters to Afghan forces.