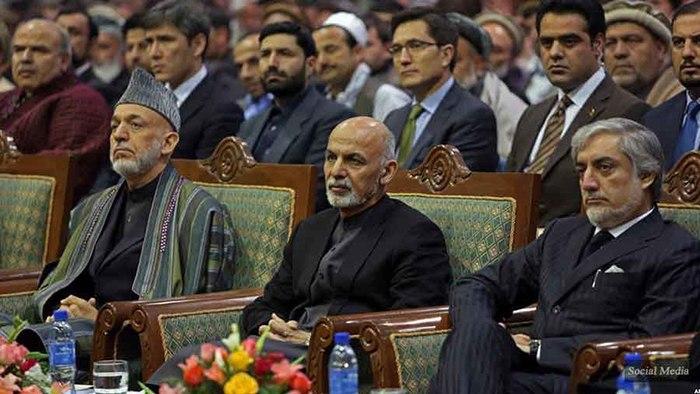 Ghani fires back as Abdullah, Karzai slam him for rejecting ‘reduction in violence’

Chief Executive Abdullah and former president Hamid Karzai, slammed President Ghani after his administration officials and close supporters opposed ‘reduction in violence’ plan, which has been offered by the Taliban.

In an interview with the BBC Persian, Karzai said that the government insistence on ceasefire will prevent intra-Afghan peace talks. “The government must not prevent start of intra-Afghan talks under the pretext of [holding] a ceasefire,” he asserted.

Later Chief Executive Abdullah, in a meeting of cabinet ministers, criticized government’s peace efforts, saying, “[peace] talks and the negotiating team should be inclusive.” He described government’s efforts for peace as ill-advised. Mr. Abdullah said peace process should not be monopolized by a group of individuals.  The people of Afghanistan should make decision about peace, he said.

In a live broadcast on the sideline of the World Economic Forum held in Davos, Switzerland, President Ghani fired back at Karzai and Abdulla, accusing them of not having even ‘any plan’ for the future of Afghanistan. “I ran a platform and I have a program. What is the program of President Karzai and Doctor Abdullah,” he asked, adding that either of the two Afghan political figures have not produced even a piece of paper for the future of Afghanistan.

Most of the country’s prominent politicians and jihadi leaders are opposing Ghani with regard to his approach toward the peace process. Head of the High Peace Council and leader of Afghanistan Islamic Unity Party, Mohammad Karim Khalili, accused the presidential palace of monopolizing the peace process. According to him, the Taliban are not willing to negotiate with the Afghan government, particularly with Ghani. He proposed that all political parties and the Afghan people needed to be considered as a negotiating party against the Taliban.

What are the differences?

Political activists and Afghan MPs expresses different issues as driving factors fueling differences between the politicians and the government to make a unified and firm stance in regard to peace talks with the Taliban militant group.

Shah Gul Rezaie, an MP from Ghazni province, believes that the national consensus has not been properly developed since the beginning of the peace process. According to her, from CSOs to the High Peace Council and government bodies have all focused on those aspects of the peace process which are not important. She blames both, the government and the oppositions for failing to create a national consensus for peace. “The presidential palace and office of chief executive which are more responsible for creating national consensus, have been marred with differences,” she noted.

A political activist and former MP, Gul Pacha Majidi, describes personal interests, seeking concessions, and relations of some politicians with foreign embassies as main reasons that have so far prevented creating a national consensus.

“The politicians have close relations with the region intelligence agency and embassies. Every country, particularly Pakistan, does not want ensuring peace in Afghanistan. Iran want withdrawal of the American troops while US has its own strategy,” he stated.

Meanwhile, the newly established State Ministry for Peace says that it has cast utmost efforts and keep consulting with politicians, MPs, CSOs, and representatives of the people in different level for creating a national consensus for peace. Spokesperson of the ministry, Najia Anwari, described the differences as a usual issue in a democratic country. “Declaring the ceasefire as pre-condition by the government is in line with the resolution of peace consultative loya Jirga  and a demand of the Afghan people to stop shedding their blood,” she said, adding that with the pre-condition the government wanted to test the Taliban’s willingness for making peace and their ability in implementation of any potential deal in the future.

Who will benefit from differences over peace process?

Describing all current Afghan politicians as proponents of Afghanistan constitution, the MP concluded that they needed to take a unified stance and negotiate with the Taliban from a unified position.

Mr. Majidi, however, believes that those countries that are backing proxy war in Afghanistan benefit the most of internal differences among Afghan politicians and the warring parties loose the most.

Spokesperson of the State Ministry for Peace, Najia Anwari, says that the government is acting responsibly by stressing on ceasefire as it is in the national interests of Afghanistan. “Having a true sense of responsibility, the Afghan government is working more than anyone else in the interest of Afghan people to make the peace process successful. The 40-year long war has harmed all the people of Afghanistan,” she noted, urging all politicians to promote the national consensus for peace and have a meaningful participation in the process.