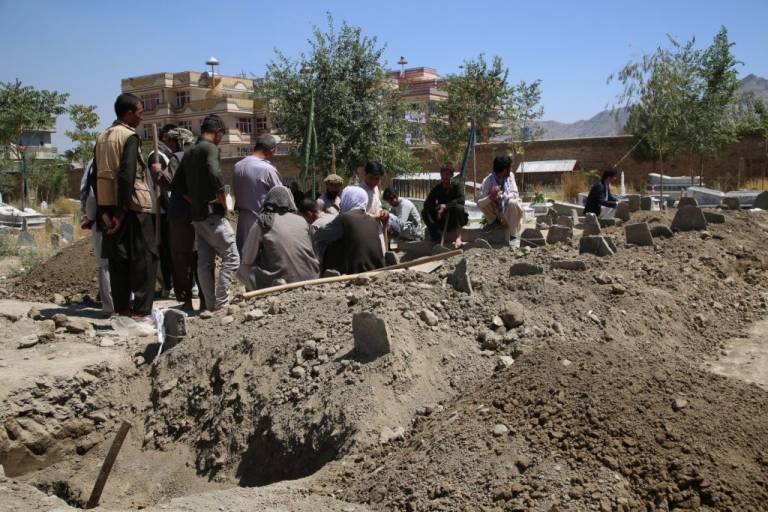 A group of local digging graves for burial of the victims of Saturday's bombing in Kabul
KabulNow·August 20, 2019

How an IS-claimed blast turned Afghan wedding party into mourning

A blast claimed by IS killed as many as 63 and wounded 182 in a wedding party on Saturday night in the capital Kabul. The death toll of this tragic incident is expected to rise.

A massive suicide bomb ripped through a wedding party held inside Shar-e-Dubai wedding hall in west Kabul on Saturday night when cheerful guests—mostly from Mirza Abdul Qader and Afshar neighborhoods of Kabul—were celebrating the party. The bomb went off while elderly family members of the groom and bride were sitting to hear marriage vows, and Habib along with his son and nephew were prepared around a food table, waiting to be served. Minutes later, the bombing turned the hall tumbledown. The next day, the country’s ministry of interior affairs confirmed that as many as 63 people were killed and 182 others were wounded.

To reflect the trauma left by this tragic incident, Etilaat-e-Roz reporter Aber Shayagan has talked to the survivors of the attack.

In the aftermath of the incident, Habib found himself in dark and dust as opened his eyes. He caught a small hand as he moved his hand around and ran outside the hall, taking short breaths in hall environment which was filled by smoke of gunpowder and smell of human blood. After handing his little brother over to someone outside the hall, Habib returned to the hall, using his lighter’s torch, walking bare food on the shattered glasses, stones, and rubble. “There were full darkness, bone-shaking sorrow, and painful voices calling for help. I happened to touch pieces of feet and hands as I searched the floor of the hall with my hands,” Habib recalled the scene. Everyone was fallen inside the hall and they could hardly take breath, he remembered.

Amir Mohammad, 50, uncle of the bride, entered the room where the bride and groom were supposed to take marriage vows when the suicide bomber blew up his explosives.

Mohammad’s 18 years old son, Mujtaba—whose wedding date had already been set for coming September—was carefully moving back and forth between the kitchen and hall so as not to lose the 350,000 afghanis saved to cover marriage expenditure. His eyes were blood stained, and he could not see things around him. “Mujtaba was engaged to his fiancée for the last one-and-half year. His wedding party was supposed to be held in coming month. He had brought the money with himself from home for the fear of robbery,” Mohammad said, lamenting that he was tore into pieces along with money in his side pocket.

When the 44-year-old Habib returns home from work, his old mother asks him to go to Shar-e-Dubai wedding hall and bring the children back home. The bomb goes off before he reaches the hall. He finds his wound child among the panic crowed shocked by the incident.

Habib takes his son to the Emergency Hospital to be hospitalized. It is sad to bring out that the hospital staffs do not allow him to pay a single visit to his son. Running out of patience, next morning he forcibly enters the hospital and finds his 14-year-old son Hamid among the dead bodies in a coffin. “I handed them my son alive but [they] brought his dead body,” Habid said.

He spoke his heart saying that his wife died of a heart attack two years ago. “My children were orphans.” Habib is working as a security guard with a leader of a political party while his elder son is a tailor. He lives in Mirza Abdul Qader neighborhood.

Residents of Mirza Abdul Qader dug 17 graves in a cemetery in the vicinity of the area in Sunday morning, August 18, ahead of Afghanistan’s 100th Independence Day celebration ceremony.

Ahmad Farid Mehrabi, counselor of the area, said that early at 6 AM, locals began burying the dead bodies one by one for the fear of not being targeted again.

“The wounded are in critical condition and die one after another. We are still burying and it is not clear when the [dying] will be stopped,” he stated. Mehrabi said not a single government official had presence in the area either for investigating the attack or sharing condolences with people.

According to him, the entire population, living in 550 houses, were in mourn and pain.

Hashmat Hussain who has lost eight relatives, including close family members, could not arrange his words to describe what catastrophe had hit him. “For the sake of god, eight people from a single family. All my cousins, Javid, Sajjad, and …,” he continued.

With puffy eyes and a broken heart sitting on an old grave, Mehrabi, said “we have lost many young people. This pain is not compensable.”

Acting Afghan interior minister Masud Andarabi has told media that the Taliban are acting as “an umbrella for terrorist activities in Afghanistan” and cannot deny responsibility for the attack by issuing a statement.

The Taliban, however, have denied any involvement in the attack.

The Islamic State Khurasan Province (IS-KP) claimed responsibility for the attack hours after the suicide bombing.

Speaking on condition of anonymity, a senior official of the country’s National Directorate of Security said that the explosives types and the attack resembled Taliban tactics.

Some residents of Afshar neighborhood of Kabul who were close relatives of the bride gathered to mourn the loss of their loved ones in their houses. The shouting and mourning by women resonated through the alleys in the area.

Locals said they had buried eight people in local cemetery while taking preparations to dig more graves as some of the wounded were in critical condition.

When Habib and other locals were heading toward the local mosque to prepare the newly arrived body corps for burial, I asked them what peace talks would mean for them as the Afghan government was preparing for a peace deal with the Taliban. “What peace,” they answered with infuriation and anger. “They bring the enemies in cities under the pretext of peace.”