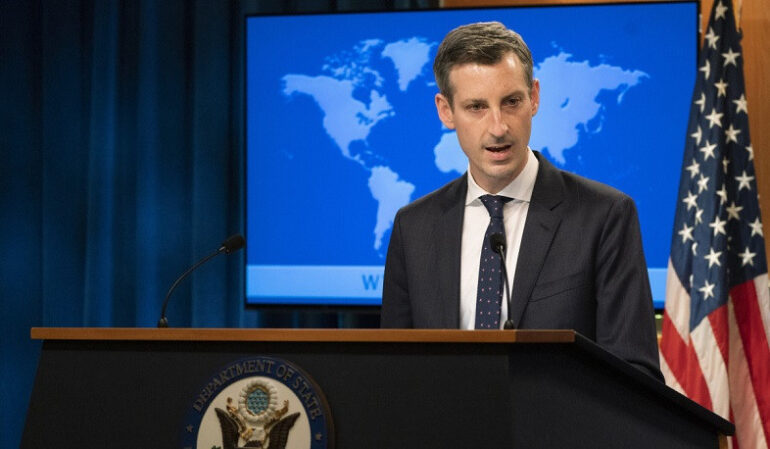 US: the Taliban will pay costs for violating women’s rights

“We’ve been clear that there will be costs for the Taliban for these actions. Absolutely everything remains on the table,” the US State Department’s spokesperson, Ned Price, said on Monday when asked about what actions the US would take to hold the group accountable.

Shortly after returning to power in August 2021, the Taliban barred girls from secondary schools. And in December last year, the group banned women from higher education and working for NGOs.

In a tweet today, the Chargé d’Affaires of the US Mission to Afghanistan Karen Decker said it was “difficult” to commemorate the International Day of Education, when Afghan women and girls were being denied their rights.

During his press briefing on Monday, Ned Price denied any support for the Taliban, noting that the US had provided about $1.1 billion worth of humanitarian assistance to the Afghan people, not to the Taliban. He added that the US-established Afghan Trust Fund of $3.5 billion was also for “broader macroeconomic stability” to support the Afghan people.

“Much to the contrary, we’ve been reviewing our approach and engagement with the Taliban in the context of many of the human rights violations, the draconian edicts, the repugnant actions that we’ve seen from the Taliban in recent weeks and in recent months. I’m just not in a position to detail where we are in that process, but I can tell you we are actively evaluating with allies and partners the appropriate next steps,” he said.

He said that the humanitarian funds directly go to the Afghan population through the US NGO partners operating on the ground in Afghanistan. But the NGOs, he added, are facing extremely difficult options due to the Taliban’s edicts banning female aid workers. “Because, as a result of these edicts, men are not allowed to enter women-headed households, NGOs cannot reach most of the most vulnerable inside of Afghanistan, including in women-run households and mothers who must maintain adequate nutrition for their newborn babies without female workers present.”

The Taliban’s ban on female aid workers, Price asserted, was unacceptable for the United States and for the international community.