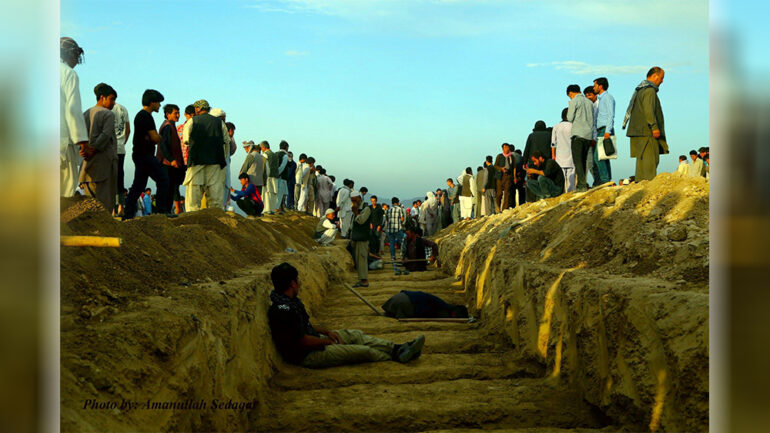 ANMPJ Calls on UN to Prevent Acts of ‘Genocide’ against Hazaras

Afghanistan National Movement for Peace and Justice (ANMPJ) has called on the United Nations to take appropriate actions under its Charter to prevent acts of “genocide” against Hazaras, prosecute those who are responsible, and initiate coordinated action for their protection.

“The most disturbing development, threatening the prospects of peace and survival of Afghanistan as a nation, has been the increase in targeted violence against the Hazara population, specifically because of their ethnic identity and religious beliefs,” part of the letter issued on November 21 reads.

The ANMPJ has addressed its letter to the UN Special Adviser on Genocide Prevention, Alice Wairimu Nderitu.

Pointing to recent deadly attacks against the Hazaras, the Movement said that the ruling Taliban have not only failed to prevent such systematic violence, but they have also denied the basic rights of the Hazaras in Afghanistan.

Moreover, the ANMPJ accused the Taliban of arbitrary arrests, execution, and forced eviction of civilian Hazaras from their ancestral lands and homes.

“The deliberate and systematic mass killings of Hazaras coupled with forced evictions and discriminatory policies by the Taliban constitute acts of genocide,” the Movement argued while referring to Article II of the Convention on the Prevention and Punishment of the Crime of Genocide (1951).

According to the letter, national and international human rights organizations have documented a total of more than 300 acts of violence against the Hazaras across Afghanistan.

In the latest attack, a suicide bombing killed nearly 60 teenage students, mostly girls, and wounded more than 120 others at a tuition center in west Kabul. The suicide bomber targeted a classroom of around 700 students in Barchi, a predominantly Hazara neighborhood.

Condemning violations of human rights, the political movement called for an independent investigation of all crimes perpetrated against Afghan people, especially those targeting Hazaras, by relevant UN agencies and prosecution of the perpetrators by the International Criminal Court.

Previously, some political figures and human rights activists described the targeted deadly attacks against Hazaras as the manifestations of genocide and called for its official recognition. As of yet, Dandenong City Council in southeast Melbourne, Australia, is the first government body in the world that recognizes the “Hazara Genocide” in Afghanistan.