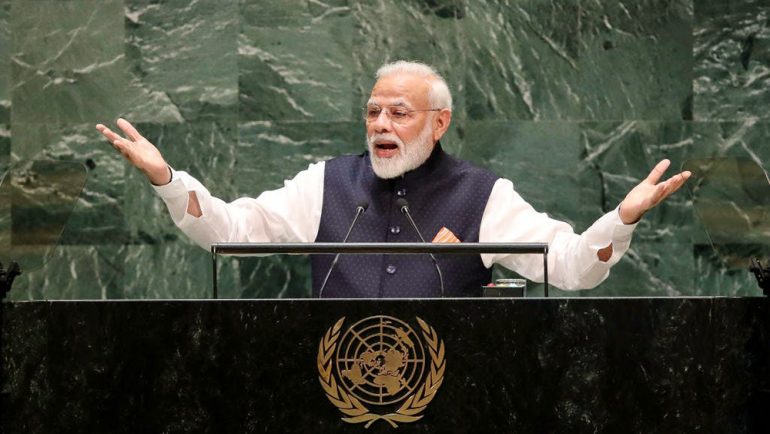 Addressing the 76th session of the United Nations General Assembly (UNGA), Indian Prime Minister Narendra Modi made a veiled attack on Pakistan, warning that those countries using terrorism as a “political tool” must understand it is an equally big threat to them.

“We also need to ensure that no country tries to take advantage of the delicate situation in Afghanistan and use it for its own selfish interests. At this time, the people of Afghanistan, women and children, minorities need help. We must fulfil our duties by providing them with help,” the Asian News International quoted Modi as saying.

He further went on to say that the world must make sure that Afghanistan will not be used for spreading terrorism and terrorist attacks.

At this time, the people of Afghanistan, women and children, the minorities there, need help, and we must fulfil our responsibility, Modi addressed the UN member states.

This comes as the Taliban, a group widely known for receiving Pakistan’s supports, has ousted the former Afghan government since August 15 and has already announced its caretaker government in Afghanistan.

On Saturday, September 25 – a day before Modi’s remarks –, Pakistan’s Prime Minister Imran Khan called on the world at the same stage to “strengthen and stabilize” the ruling Taliban government for the “sake of Afghan people.”

“If the world community incentivises them, and encourages them to walk this talk, it will be a win-win situation for everyone. Because these are the four conditions that the US-Taliban dialogue in Doha was all about,” he said about the Taliban.

PM Imran Khan said that a destabilized, chaotic Afghanistan “will again become a safe region for terrorists”, pointing out that this is why the US came to Afghanistan.

The Taliban announced its acting government on September 07 under the leadership of Mohammad Hassan Akhundzada as Prime Minister and designating Mullah Abdul Ghani Baradar and Mawalawi Abdul Salam Hanafi as his deputies.

No country has so far officially recognized the government of the Taliban.

The group has changed the Ministry of Women Affairs to Ministry of Propagation of Virtue and Prevention of Vice. No women is seen in the Taliban cabinet despite their repeated promises that they will some posts to women.

The cabinet members are all the Taliban figures, some still in sanction lists and have bounties on their heads, with one Tajik as a minister and a Hazara as deputy minister.