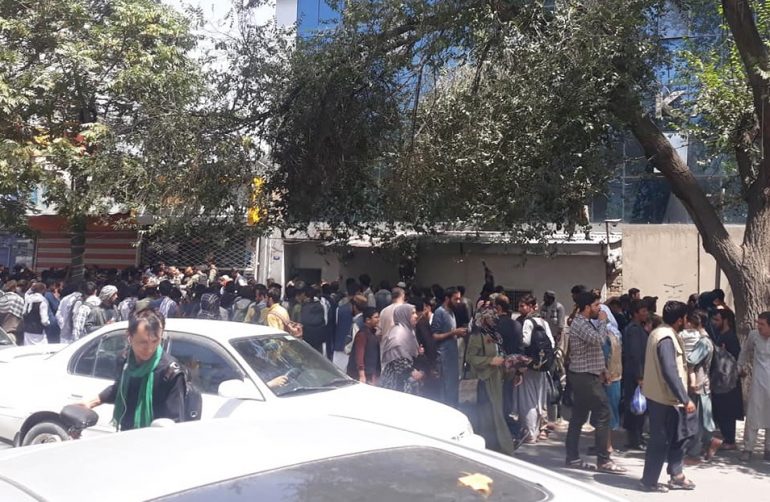 Scared of the Taliban’s storm, people line up in large numbers outside banks in different parts of the capital Kabul to get their cash out after eight provincial capitals, including the strategic city of Mazar-e-Sharif, have fallen to the militants since last night.

Some branches of banks have reportedly run out of cash and closed their doors to their worried customers.

With the fall of Mazar-e-Sharif, Jalalabad, Faryab, Laghman, Daikundi, Bamyan, Khost, and Maidan Wardak, the government has now only its control on the capital Kabul, Nooristan, Panjshir, Kapisa, and Parwan provinces.

Of Afghanistan’s 34 provinces, the Taliban now control 29 provinces in the country effectively besieging the capital Kabul.

Moreover, afghanis value has dramatically fallen over the past few days. A USD was even exchanged for 90 afghanis yesterday, Saturday, August 14. Today, the central bank, however, announced the price for a USD equal to 86 afghanis.

Talking to Kabul Now, Zabihullah Mujahid, a Taliban spokesman, meanwhile, assured that no security threat will be posed to the banks, traders, and investors by the Taliban. Cash deposits at the banks will be safe and secure, he added.

He reiterated that the Taliban militants will not harm anyone’s property.