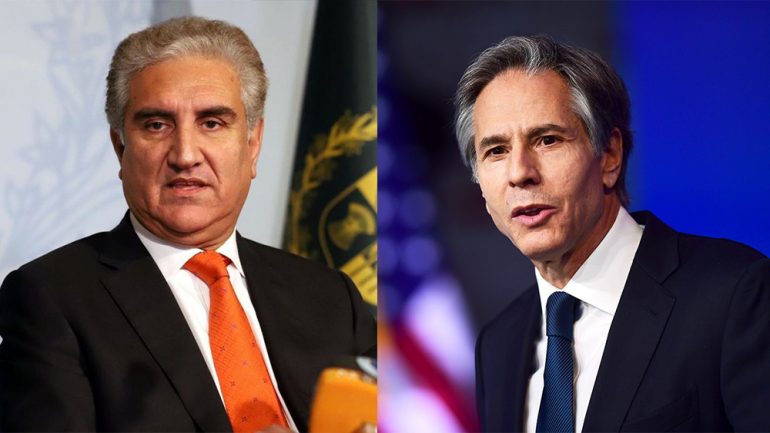 On Friday, July 09, the US Secretary of State, Antony Blinken, had a phone conversation with his Pakistani counterpart, Shah Mahmood Qureshi, to discuss Afghan peace process.

A statement issued by State Department said the two sides discussed US-Pakistan bilateral relations, the importance of continuing cooperation between the two countries in the Afghan peace process, and joint efforts to fight against the Covid-19 pandemic.

“I look forward to continuing cooperation on the Afghan peace process, tackling COVID-19, supporting regional stability, and other key issues,” said Blinken in a tweet on Friday.

“Pakistan is committed to forging a sustainable relationship with the United States anchored in economic cooperation, connectivity & peace & we remain a resolute partner for peace in Afghanistan,” said Pakistan’s foreign minister in a tweet.

In a news conference on Thursday, July 08, John F. Kirby, the Pentagon press secretary, said additional aircrafts and technical and logistical assistance will be provided to Afghan security and defense forces especially by the US Air Force.

He spoke about the US support for Afghanistan after the withdrawal of its troops from the country. The withdrawal of forces will give the US a chance to focus on other terrorists and nation threats that have spread globally especially in Africa, he added.

“We want all countries in the region to want the same thing that we want for the Afghans, which is peace and security and stability and an Afghan-led negotiated process that leads to a political settlement. That is up to the Afghans and their future [will be] determined by them,” he detailed.

Recently the US officials pledged to provide the Afghan army with 45 different helicopters and seven A29 attack aircrafts.

These come as the Taliban militants have surged attacks, with nearly 32,384 families have been displaced from 25 provinces in the last one and half month. Speaking at a news conference in Kabul on Thursday, July 08, Ghulam Bhauddin Jailani, State Minister for National Disaster Management Authority, said 20,000 families have been assisted in coordination with the provincial leadership.

The US officials have repeatedly assured people of Afghanistan and the Afghan government that Washington would continue to support the Afghan forces and government. The statement is made while the Taliban have dramatically increased attacks across the country, trying to overrun districts and gaining control over district administrations.