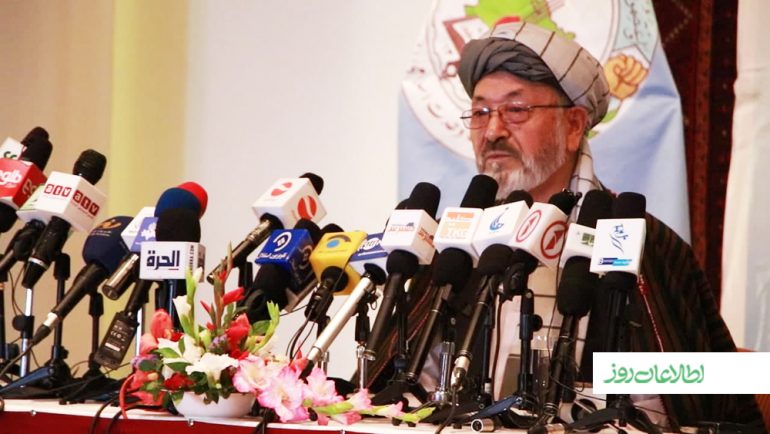 Khalili reiterates importance of ensuring a ‘just peace’ in Afghanistan

Appearing in a press conference in Kabul, Mohammad Karim Khalili, leader of Hezbe Wahdat-e-Islami Afghanistan, reiterated that the people of Afghanistan demand a just, dignified, and sustainable peace in the country. A dictating and imported peace will never work, he warned, adding that all stakeholders must be involved in the peace process.

Pointing out to the recently intensified attacks against Hazaras, Khalili denoted that the people who voice for a dignified peace are subjected to “genocide” and ethnic cleansing.

He underlined that the massacre of the Hazaras for their ethnic identity manifests a “genocide” threat against them and the government must do its responsibility to protect them. Khalili urged the United Nations, the UN Security Council, Afghanistan international partner countries, and the Afghan government to probe manifestation of “genocide” in attacks carried out against Hazaras.

West of Kabul which is predominantly populated by the Hazaras has witnessed unprecedented hike in deadly bombings targeting civilian populations in public transport, schools, and other public spaces in recent months.

In the latest attack, at least seven civilians were killed and six others wounded as a result of two blasts targeted a car and a van type vehicle simultaneously in PD13 and PD6 of Kabul city on Sunday, June 12. The deadliest one was a school bombing which left 90 people, mostly Hazara school girl students aged 13 to 18, dead and 240 others wounded. The incident took place on May 08 in Barchi, a western neighborhood of Kabul city.

Second Voice President Sarwar Danish has described such targeted attacks against Hazaras, particularly the school bombing, as a clear manifestation of “genocide.”

Afghanistan Independent Human Rights Commission (AIHRC) has called on the UN to launch a probe into the school bombing and similar massacres committed in Afghanistan.

To advocate for the Hazaras and ask for national and international recognition of a “genocide” threat against the ethnic group, a large number of Afghan social media users and as well as nationals of other countries joined the hashtag campaign #StopHazaraGenocide on Saturday, June 05.

Touching on the peace process, Khalili described the ongoing process as “vital” for the country while criticizing that the peace process is much slower than the spread of war in Afghanistan. He expressed optimism that it is a good opportunity for Afghanistan as the world and region also share the demand of the Afghan people for peace.

Addressing the Taliban, he warned that the solution for Afghanistan issue is neither war, nor force, and nor continuation of monopolizing the power. “Whoever is willing to ensure peace in Afghanistan must not resort to monopolization and attempts to marginalize others,” Khalili asserted.

Afghanistan, its people, and the world have undergone through changes over past 40 years, as he put it, and cannot surrender to bullying.

He proposed for the Afghan government and the Taliban to join the people and influential political parties in order to ensure justice, harmony, and democracy in Afghanistan. Otherwise, he warned that every group can create barriers and harm security in any corner of the country.

This comes as the Afghan peace process is bogged down in Doha, capital of Qatar, while the Taliban have concentrated mainly on making territorial progresses against Afghan forces in battlefields since May 01, beginning of the foreign troop withdrawal.

As many as 15 districts have fallen to the Taliban since May 01. The government, however, denies saying that the districts’ centers were either left in a “tactical retreat” or moved to another places.