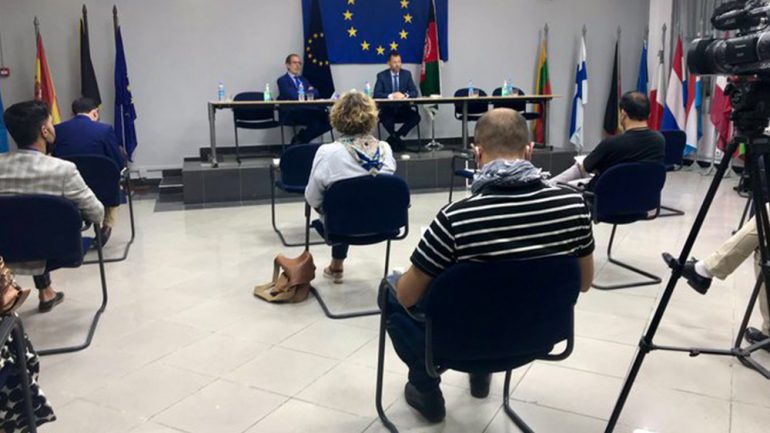 The violence must stop and the peace talks must move from discussions on procedures to substantial negotiations, European Union’s Special Envoy for Afghanistan Tomas Niklasson has said during his visit to Afghanistan, according to the EU’s statement issued on Friday, June 04.

Moreover he has underlined that the human cost of the conflict is immense and the civilians is suffering the most. “I would be happy the day sanctions on the Taliban could be lifted. For that to happen we need to see significant progress in the peace process and a stop to violence,” the statement quoted Mr. Niklasson as saying.

These comes as the level of violence, mostly the Taliban attacks, is on a dramatic rise in different parts of the country with scores losing their lives to these violence.

As many as eight civilians, including a female journalist and her mother, were killed and 10 others wounded as a result of two blasts targeted two minibuses in PD3 of west Kabul. The incident took place on Thursday’s evening, June 03.

No group claimed responsibility for the two blasts.

In his first meeting as EU’s Special Envoy, Mr. Nilasson met some women activists and girl students who survived the deadly attack against Sayed ul-Shuhada High School in west Kabul. The school bombing took place on May 08 leaving 90 dead and around 240 others wounded.

“As the troops are withdrawing, the EU’s intention is to stay in Afghanistan – continuing our support to the people. Despite the challenging times Afghanistan is facing, I am struck by the strong resilience of the people of this country,” the EU’s envoy noted about his meeting with women and girl students.

As per the statement, Mr. Niklasson has also met with President Ghani, Chief of the High Council for National Reconciliation Abdullah Abdullah, and Minister of Foreign Affairs Mohammad Haneef Atmar. He has underlined the importance of political unity and discussed the EU’s role in the peace process during the meetings.

In his new capacity, Mr Niklasson’s mandate is primarily focused on issues related to the peace process – including regional outreach. Following his visit to Afghanistan, the EU Special Envoy will travel to Doha and shortly after to Pakistan.