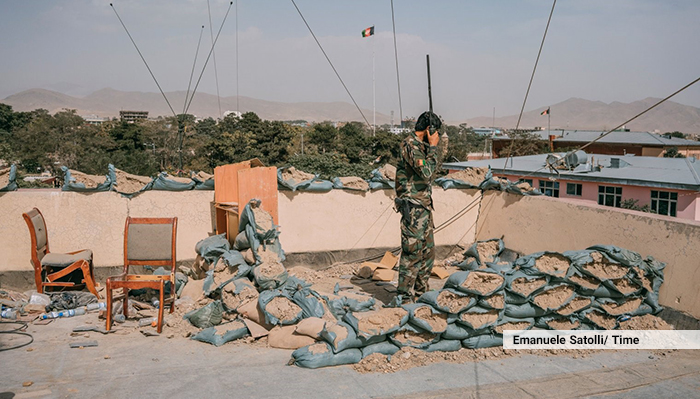 On May 01, after holding a two-week tight siege around a military base in Arezu neighborhood of Ghazni city, the Taliban succeeded to overrun a military base, killing three security forces, wounding two soldiers, and taking more than 20 Afghan forces as hostages. The Afghan security forces were quick to take action and built a new security check post in the area. Following the clash, a number of Ghazni residents held a rally, protesting against the establishment of a new military base in Arezu neighborhood of the city. They called on the government forces and the Taliban to leave the area.

Ahead of the high-level peace meeting to be hosted by Turkey and monitored by the UN, the Taliban has intensified military campaigns in several provinces that include Ghazni, Helmand, Kandahar, Baghlan, and Faryab.

The Taliban militants have maintained a presence in the strategic Ghazni province through which ring road connects Afghanistan’s west and south to center and the capital Kabul. In recent months, the insurgents put military efforts to attack Afghan security and defense forces in the city. In their latest pushes, the militants overran at least two army bases in Arezu neighborhood, located near the 3rd brigade of the 203 Tandar Military Corps in Ghazni’s capital city, and took 20 soldiers as hostages.

As part of the campaign, the Taliban militants assassinated several military commanders this spring. Police chiefs of three districts – Dehyak, Nawah, and Gero – were killed either in a direct military engagement or lost lives to Taliban-planted roadside bombs over 20 days.

Over the last two months, the Taliban tried to claim more territories in Afghanistan just to boost up their leverage at table talks in Istanbul conference, Sayed Omar Nooristani, Ghazni governor said while offering the Eid prayer last Thursday, May 13. The security forces stationed in Ghazni prevented them to achieve this goal, he said.

Ghazni is a strategic city in the country. Over the last 17 years, the militants launched their utmost military campaign to take control over the Ghazni city. The city controls highway and Taliban control of the city would enable them to control the only highway that connects south to the north. In August 2018, the Taliban militants attacked the city and continued an intense battle to militarily win over the city but the Afghan security and defense forces pushed the militants back to their safe havens in the districts surrounding the city.

Zabihullah Mujahid, a Taliban spokesman, claims that many of Ghazni districts are under the control of the Taliban and few others are under the group’s siege. The government’s operation was followed by a defeat in Dehyak, Arezu neighborhood, and Khawaja Omari in recent weeks as the Taliban overthrew some military bases and seized their munitions, Mujahid told Kabul Now. “When it comes to a siege, the people are not under siege. The Mujahideen have tightened its siege on Moqur, Qarabagh, and Khawaja Omari districts. Mujahideen have blocked the enemy’s supply routes,” the Taliban spokesman claimed.

Ghazni governor, however, rejected the claim made by the Taliban. He said that the Taliban’s plan to overthrow some districts and tighten its grip on Ghazni city faced a defeat. “They stormed at districts of strategic importance. Not only they could overrun any district, but they also suffered heavy casualties in [counterattacks] by the country’s [security] forces,” said Mr. Nooristani. He claimed that the Taliban have suffered heavy casualties.

Over the last years, Ghazni province remained insecure. Routes connecting its districts to its capital city are not only insecure but they have been blocked even for weeks and months by the Taliban. The Taliban’s car bomb against military bases, roadside bombs, and offensives have taken a high toll on the Afghan defense and security forces.

In a complex attack on Ghazni city, the Taliban militants took control of the city for days in August 2018. As many as 95 security forces of Ghazni Police and 12 army soldiers were killed during the four-day fighting in Ghazni city, according to a government report. 81 police soldiers and 31 army forces were wounded in the large-scale Taliban attack. Nearly, 100 civilians were also killed during the Taliban’s complex attack.

Late in May 2020, Ghazni witnessed again a growing increase in the level of violence and assassinations. The violence took scores of lives including army and police officers, government civil servants, members of the province’s civil society organizations, and tribal elders. The violence kept its pace almost until the end of the year. On December 21, 2020, armed men assassinated Rahmatullah Nekzad, head of Ghazni’s Journalists Union. Though the Taliban remained tight-lipped or even rejected responsibility for targeted killings – including Nekzad’s assassination –, the government continues to blame the group for such killings in different parts of the country.

In addition to assassinations and the Taliban’s campaign, the inaction of the central government is also said to be a key factor behind the growing insecurity in Ghazni. Although top security officials and President Ghani paid repeated visits to Ghazni city after it was overrun shortly by the Taliban in August 2018, the province largely remained insecure and the situation only kept deteriorating.

Ghazni is a strategic city

Situated in the south-eastern part of the country, Ghazni shares a border with Maidan Wardak and Bamyan to the north, with Paktika and Paktia to the east, with Zabul to the south, and with Urozgan and Daikundi provinces to the west. Maidan Wardak, Paktia, Paktika, Zabul, and Urozgan, Ghazni’s neighboring provinces, are insecure provinces where the Taliban control swaths of territories and often launch attacks against government forces. Afghanistan’s biggest highway, the Kabul-Kandahar highway, also passes through the province. Moreover, Ghazni has strategic importance from economic and military perspectives as it connects several parts and southern parts of the country to the capital Kabul and links central regions to the eastern provinces.

As per the account of Mr. Nooristani, Ghazni is important for the Taliban due to the following two reasons: Firstly, it is the capital of Islamic culture which makes it religiously and internationally important for the group. Secondly, it is important for Highway 01, Kabul-Kandahar highway, is passing through Ghazni and connects around eight provinces and five ports to the capital Kabul. “The enemy can use this geographic [location] to cut the link between the capital [Kabul] with southern, south-western, and even the northern, and north-eastern provinces,” Mr. Nooristani explained how Ghazni’s strategic location motivates the Taliban to focus their attacks on this province.

The Taliban rejected to attend the Istanbul conference which was scheduled to start on April 24 and last for 10 days. The hosts of the conference, Turkey, Qatar, and the United Nations, then announced that it has been postponed for a later date after the holy month of Ramadan. Though the group publicly announced violation of the US-Taliban peace deal, specifically the part which called for a complete withdrawal of foreign troops by May 01, as the reason behind their hesitance to attend the conference, still it seems highly likely that the Taliban would finally participate the Istanbul conference which is already compared to the Bonn Conference – the conference which established the new democratic order in Afghanistan after the Taliban fall in 2001.

According to the Ghazni governor, the Taliban attempts to overrun some provinces are mainly aimed at securing more concessions in the Istanbul conference. “Ghazni has particularly been a priority for Afghanistan’s enemies in a bid to take Ghazni’s control, overthrow some districts, and make it to the center [of Ghazni] and then use it to secure concessions in next negotiations that will take place in different countries,” Mr. Nooristani argued.

Atiqullah Amarkhel, who is a veteran army general, also believes that the recently intensified violence in various provinces of the country, particularly in Ghazni, is aimed at boosting the Taliban’s negotiating position ahead of Istanbul conference. Pointing to different public uprisings started from Ghazni and led to the collapse of different regimes in Afghanistan, he concluded that Ghazni has historic and religious importance for the Taliban as well.

“If Ghazni collapses, several provinces located in the south and south-eastern part [of the country] will collapse too,” Mr. Amarkhel said about the military importance of Ghazni, adding that the Taliban will use all its capacity to keep Nawa and Andar districts under their control.

In 2018, Afghan security forces and civilians suffered huge financial losses after Ghazni city briefly fell to the Taliban. A report prepared by the office of Ghazni’s deputy governor seen by Kabul Now suggests that goods of Ghazni’s shopkeepers and business owners worth 464 million and 466,600 afghanis were burnt in the four-day fighting with dozens of shops and buildings destroyed as a result.

The 3rd brigade of the 203 Tandar Military Corps couldn’t prevent Ghazni’s collapse. The army stepped in with aerial bombardments and artillery fires days later and pushed the Taliban out of the city. Now, the military experts think that the ongoing military formation in Ghazni is useless and it would not ensure the security of the province.

“Ghazni had a famous [military] division that could secure it in the past. Paktia had a corps. Today, Ghazni’s security [affairs] is commanded from Paktia. The American way of military formation is not compatible with Afghanistan’s geography. Ghazni has now a brigade and its battalions are positioned in a way which is not even suitable for supply aims,” Amarkhel told Kabul Now.