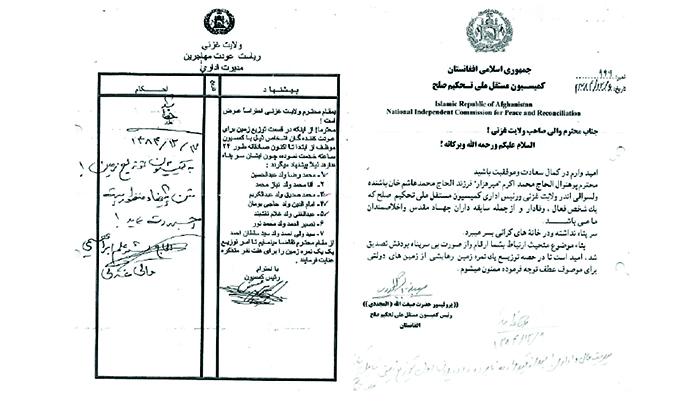 Government documents obtained by Kabul Now suggest that a total of 7,647 plots – allocated to returnees and Internally Displaced People (IDPs) – have been illegally given to people of choice in the newly-built returnee’s township in the Ghazni city. Findings show that ex-local officials, misusing their authority, have distributed nearly 2,000 plots to people who were neither returnees nor IDPs. Those who were given plots illegally include employees of the central bank or Da Afghanistan Bank, workers of Ghazni directorate of refugees and repatriation, and employees of the prosecutor’s office of the Ministry of Interior.

Sher Alam Ibrahimi, then the Ghazni governor, has approved most of the requests made for land distribution in 1384 and 1385 solar years.

In December 2005, the Afghan government undertook a land-allocation scheme designed to distribute plots to landless Afghan repatriates who make a comeback to their homes. Amid accusation of corruption and land-grabbing by government officials, strongmen, and warlords, the government land-allocation program was welcomed by the Afghan returnees.

A joint-government committee tasked to investigate cases of land grabbing in Ghazni’s newly-established township reported cases of “non-transparent distribution” of plots to Afghanistan’s Attorney General’s Office (AGO). To investigate the claims, the AGO tasked Ghazni’s appeal prosecution office to launch a probe into cases. Though a long time has passed ever since Ghazni’s appeal prosecution office was assigned to investigate the cases of land grabbing, it has not taken action so far.

Known as Shahrak-e-Muhajireen – literally meaning refugees’ township – the township is named after Abu Rayhan al-Biruni, a Muslim astronomer, mathematician, geographer, and historian. The foundation of this township was laid following a presidential decree issued by former President Hamid Karzai, who initiated a national land-allocation scheme for Afghan returnees and IDPs.

Abu Rayhan al-Biruni Township sets on 4,664 acres of land and the Ministry of Refugees and Repatriation is in charge of the management and distribution of this township. From 1384 to 1385, the government distributed plots to 7,720 families but in late 1385 the distribution process was stopped for lack of plots in its first phase. More than 4,000 families were living in the township in 1398 solar year.

A finding by the government committee suggests a large number of plots originally allocated to returnee and IDP families were distributed to ineligible families mostly related to government employees.

Following a presidential decree, issued on December 06, 2005, former president, Hamid Karzai, assigned joint-government commissions in each province that were headed by deputy governors to manage the land distribution scheme in Afghanistan.

Initial findings by the fact-finding committee of the Ministry of Refugees and Repatriation showed that as many as 1,995 plot recipients had not provided a credible document to verify their status as returnee or IDP. The plots were distributed to them on basis of documents that were forged to identify them as returnees or IDP. Even some of them had received plots on the basis of membership cards of political parties or decrees issued by governor.

The joint-government commission in Ghazni that was tasked to manage plot distribution never held meetings though it was required to hold supervisory meetings. Findings show that as many as 7,647 plots were distributed to people who were not eligible to have government-distributed plots in a township built for returnees and IDPs. Those who received plots had made a written request to the then Ghazni governor, Sher Alam Ibrahimi, and provincial directorate of refugee and repatriation, then headed by Abdul Hamid Wafa. Every recipient deposited 5,000 afghanis into a government bank account. Nasir Ahmad and Kamil Khan were in charge of the housing scheme when the plots were given to ineligible recipients.

And an additional 5,652 plots have been distributed to documented returnees and IDPs whose ID card serial numbers do not match their returnee status cards, finding shows.

The plot recipients who were not eligible

Documents obtained by Kabul Now suggest that 119 individuals who had neither a returnee nor an IDP status have been given plots following orders by the then governor. 19 ex-members of Ghazni Provincial Council and eight members of the technical board of land-distributing commission were also among these 119 individuals.

In an official letter, the central bank in Ghazni has requested for distribution of land plots in the refugees’ township for seven of its employees. The governor has later approved the request and the plots have been distributed to the bank’s staff.

In an official letter, the prosecution office of the Ministry of Interior requested plots for 12 police officers in this township, justifying that 12 police families were homeless living in Kabul. The then governor approved it, documents show.

In two separate cases, the then governor approved requests of plot demands for a local police official and an official from the High Peace Council who was recommended by the then chairman of the Council, Sebghatullah Mujaddadi.

In addition to these cases, some Ghazni residents along with residents from other provinces requested the then governor to give them plots in this township. The governor approved their requests, giving each of them a plot.

A fact-finding committee assigned by the Ministry of Refugees and Repatriation found that some strongmen along with locals residing in the surrounding villages of the township grabbed 2,000 plots. The committee reported it to relevant government institutions to investigate it, but to no avail.

The provincial refugee and repatriation directorate in Ghani accused Mohammad Ali son of Ghulam Nabi, Abbas son of Mohammad Ibrahim, Imamuddin son of Fakhruddin, Hessamuddin son of Fakhruddin, Ghulam Jilani is also known as Haji Lala son of Sakhidad, Qurban, and Shakoor – who are all property dealers – as land grabbers, asking the security institutions to arrest them.

Finding shows that some of those who received plots in this township have sold their plots to property dealers in the town, even with the 104 presidential decree allows no recipient of the plot to sell his plot before a 10 year period of time is completed.

A report by the joint-government committee suggests that those who had connections with senior government officials received plots in better locations and sold them to property dealers. The report said men named Qurban and Shakoor, the two property dealers, were involved in the business of buying and selling plots in this township.

On June 06, 2018, President Ghani, issued a decree that tasked the Ministry of Refugees and Repatriation to assess the land-allocation scheme in Ghazni and confiscate those plots which were distributed illegally or out of the due procedure. The presidential decree tasked judicial organs to punish those who were found guilty of land grabbing in this township.

On March 23, 2019, the Ministry of Refugees and Repatriation appointed a committee to investigate alleged cases of land grabbing in this township. A report by this committee showed that out of 7,720 land plots distributed in 1384 and 1385 solar years, 73 of them lacked official documents.

Some culprits brought to justice

Of many culprits involved in corruption in this land-allocation scheme, Abdul Hamid Wafa, the former provincial head of Ghazni refugee and repatriation directorate, has been imprisoned on charge of corruption.

In January 2010, a primary court in Ghazni sentenced Ghulam Mustafa, former head of Ghazni’s information and culture department, to three years in prison, Abdul Hamid Wafa to one year and six months in prison, and Ghazni’s mayor, Hakimullah Ghazniwal, to two years in prison. Out of the three local officials, Mr. Wafa was immediately taken to prison for he was the only accused who made presence at the court.

But Hakimullah Ghazniwal and Ghulam Mustafa have finally succeeded in getting acquitted after repeated appeals.

In September 2019, the committee tasked by the Ministry of Refugees and Repatriation, sent the dossier of land grabbers—distribution of 1,995 plots for ineligible individuals—to the Attorney General’s Office (AGO) to investigate the cases. The AGO, however, said it has referred the case to Ghazni’s prosecution office.

A source told Kabul Now that the AGO has not launched any probe into investigating this case.

Official letters obtained by Kabul Now suggest that Ghazni’s appeal prosecution office have sent two official letters – the first letter issued on April 21, 2020, and the second one issued on June 30, 2020 –  to the provincial refugee and repatriation directorate in Ghazni asking it to identify the land grabbers and violators but to no avail.