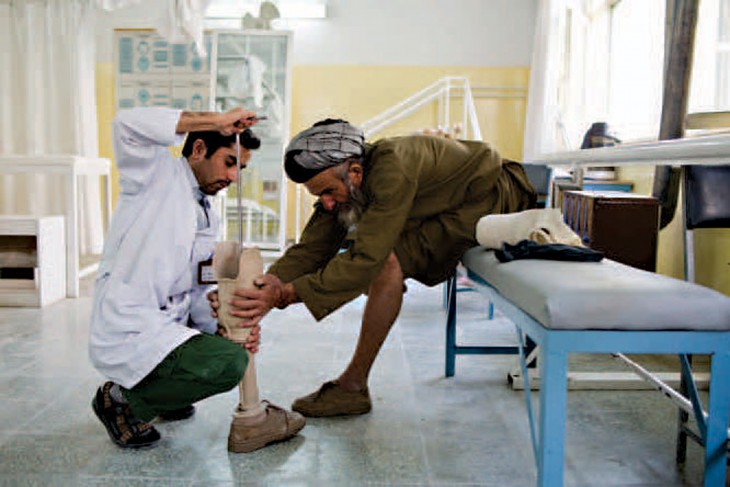 An Afghan man with disability in an ICRC center in Afghanistan

41.7 of Afghans are disabled by war: AIHRC

A new survey by the Afghanistan Independent Human Rights Commission (AIHRC) finds that 41.7 percent of the Afghanistan population were disabled by roadside bombs and war. The AIHRC has talked to 1,504 interviewees in 22 provinces of the country.

Use of drugs, traffic accidents, lack of safety measure in working place, lack of maternal healthcare, and avoidance of polio vaccination is also listed as the cause behind disability in the country.

The survey has found that 38.1 percent of the persons with disabilities (PWDs) who talked to AIHRC have experienced some sort of violence at home and in their community as they have some sort of disability.

Among those who were abused and subjected to insults, humiliation, and harassment, 14 (2.4%) were victims of physical violence at the home and community, and 391 (68.2%) were deprived of support by the family members, people and government, 127 people (22.2%) were humiliated and insulted, 18 people (3.1%) were barred from entering public places and public gatherings, and 23 people (4. %) were banned from traveling and socializing with friends and relatives, the AIHRC report says.

Of the 1,504 participants, 88.3 percent have been identified as eligible to vote. Among them, 81.9 percent have participated in the elections and 18.1 percent did not exercise their right to vote. The study suggests that a total of 73 respondents, which makes 5.5 percent of the persons with disabilities qualified to run in the elections, have nominated themselves in the last parliamentary elections and for provincial councils.

According to the study, a total of 425 respondents (28.3%) were attending educational institutions which suggest a 15.5 percent increase as compared to the previous solar year 1398.

As per the report, 71.7 percent of the respondents have said that they had no access to education for long-distance existing between their homes and educational centers, (5.6%), rejection by school officials for their disability (0.7%), lack of the required facilities (14.8%), economic problems (8.1%), family prevention (7.2%), lack of transportation facilities (3.2%), and other reasons (60.3%).

A biased behavior towards the PWDs, long distance to health centers, lack of the required equipment and facilities, and high costs of medical treatment have been reported as reasons behind the dissatisfaction of the PWDs from health services.

The AIHRC findings suggest that out of 1,328 respondents eligible for work, 32.2 percent were employed or ran businesses while a total of 901 respondents (67.8%) were unemployed or did not have any business. These figures, however, suggest a slight increase in the employment rate for the PWDs comparing to the previous 1398 solar year, when 21.3 percent reported being employed or running their own businesses.

Out of 1,504 respondents, 824 (54.8%) enjoy the financial benefits provided for in Article 8 of the Law on the Rights and Privileges of Persons with Disabilities; But another 677 (45%) said they were deprived of the privilege. According to the survey, 497 people (73.4%) said they were deprived of disability subvention because they were not persons with a war-affected disability, 25 people (3.7%) said due to the long bureaucratic process of registration of people with disability in the offices, 52 people (7.7%) said due to discrimination and corruption in the registration process and another 52 people (7.7%) said they did not receive disability subvention because they were unaware of it.

As per the study report, out of 1,504 people included in the survey, 334 (22.2%) confirmed that they had enjoyed small bank loan programs while 557 (37%) said they failed to secure small loans as the conditions for a loan were restricted, and 298 (19.8%) said they could not use small loans for lack of lending institutions in their place of residence.

The AIHRC has registered a total of 154 cases of human rights violations, 24 of which included human rights violations of the PWDs. In 18 of the 24 cases, people were denied the right to obtain the disability subvention, their right to work was violated in five cases, and their right to education was violated in one. The AIHRC followed up the cases and referred them to the judiciary to seek justice, the AIHRC said in its study report.

As per the report, the Commission held more than 50 advocacy sessions across Afghanistan in 1399 solar year. As a result, the AIHRC received commitments from different governmental and non-governmental organizations in order to improve the human rights situation of the Afghan PWDs.