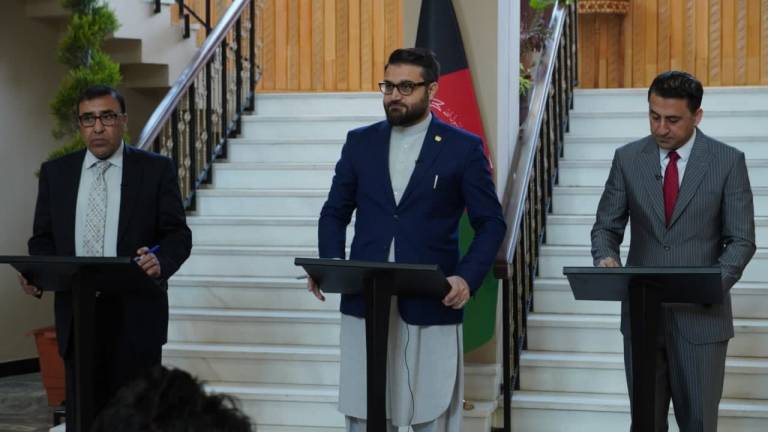 Taliban are not willing to resume peace talks

The Taliban’s main goal is to retake power and they will continue to kill people, says a senior Afghan official.

Speaking at a press conference held on Saturday, February, 13, Hamdullah Mohib, National Security Advisor, said the Taliban are not willing to engage in a power-sharing deal that is why they do not want to resume talks.

Ahmad Zia Saraj, the chief of the National Directorate of Security, and Shah Mahmoud Miakhel, a deputy defense minister, were also present at the event.

Mohib called on the Taliban to participate in the peace process though he reiterated that the Taliban were reluctant to put an end to war and violence.

“We want peace and stability in Afghanistan. We wait for the Taliban to prove that they want peace too. Demanding an absolute power that the Taliban want is not making peace,” Mr. Moheb added.

The intra-Afghan talks are on halt as some senior Taliban leaders are on a visit to neighboring Uzbekistan.

On Friday, February 12, Sarwar Danish, the Second Vice President, warned any peace deal which tempts to undermine the Islamic Republic of Afghanistan and the Constitution will not only restore real peace to the country but spreads violence.

The Taliban, however, claims that the group has reduced the level of violence.

Hamdullah Mohib accused the Pakistani government of playing a double game, saying it is not cooperative with the Afghan government.

Ahmad Zia Saraj said the Taliban military leadership was based in Quetta, Peshawar, and Karachi.

According to the peace pact signed between the US government and the Taliban, the US troops have to leave the country by May 2021. The new US administration, however, said that it would review the agreement and check if the Taliban have fulfilled their commitments.