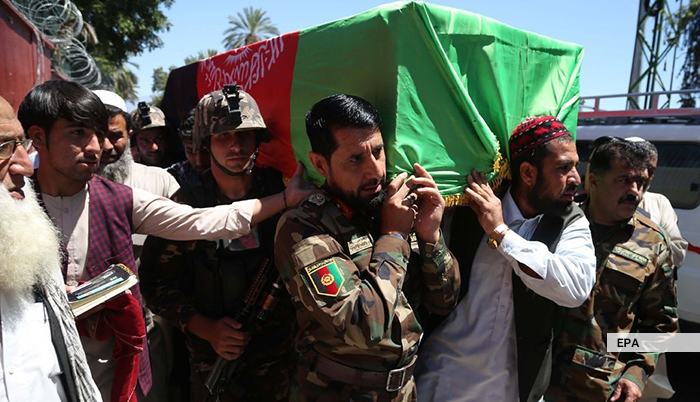 Swear to God, I have no bread, says father of fallen soldiers

“I swear to God, I have no bread,” says Mohammad Hanif, 57, whose two sons, Eid Gul and Saddam Hussain, lost their lives while serving the Afghan National Army in battles against the Taliban. Four years ago, Eid Gul, 20, was killed in a Taliban ambush in Nad Ali district of the southern Helmand Province. The next year, Saddam Hussain, 22, was killed in a roadside bomb blast in Tagab district of the northern Kapisa province.

This heavy loss broke the back of the 12-membered Hanif family—leaving the family expose to an extreme poverty. The government has not paid their remunerations for one and a half year, says Hanif, who is now living in a rental house with limited resource for living in Pul-e-Charkhi neighborhood of Kabul.

“Tell me what should I do? My homeland will face a bad destiny if I imprecate. Whom should I refer to for taking money [salaries] of my sons,” Hanif complains in disappointment. He says that relevant officials in Gardez, capital city of the eastern Paktia province, do not give remunerations of his two sons, saying that they are running out budget. “Most of the people have received their remuneration (salaries of their fallen sons) but they have not paid ours.”

Life for the 12-membered family is a real day-to-day ordeal. Hanif has gone through operations twice. “I paid 180,000 afghanis for lumbar decompression surgery in Peshawar—then my two sons were alive. Last year again, I visited a hospital in Pakistan, spending 130,000 afghanis for treatment of my feet. I feel better now but I can’t lift heavy loads up for my spine will hurts.”

The father of fallen Afghan soldiers complains that his family neither have food to eat, nor firewood to heat their house. “We don’t have firewood, I swear to God that I have no bread. My children get under blankets to warm themselves,” says Hanif.

The third son of Hanif was serving Afghan Local Police Force – a pro-government militia- but he left the Force upon repeated pleas of his mother, who feared she might lose him like his two siblings. “What would I do if he gets martyred? I would not get upset if my son is martyred [for the sake of his country] but his mother asked him to leave [serving] the local police,” Hanif stated. My son left the local police when saw his mother in tears, he said.

But Hanif’s third son, who struggles with a harsh unemployment, is thinking to rejoin the Afghan security forces.

Unending suffering of a mother

Alongside seven Afghan soldiers, including security head of Samangan’s police department, Mehrullah was killed in a Taliban offensive in Ziraki village of Dar-e-Suf district of Samangan province in October 2018. He was 19 years old when he lost his life—leaving three sons behind. Mehrullah’s death made life a bitter struggle for his mother, widow and three orphaned children.

Bibi Fatema, Mehrullah’s mother, says the government has not paid remuneration of his fallen son for the last six months of 1399 Fiscal Year – ended in December, 2020. Ms. Fatema underlines that the government has to pay a total of 50,000 afghanis for the last six months of the fiscal year to them. “Whenever we referred to the government to get a six-month salary of Mehrullah, they tell us they are running out of budget. Today, we even do not have mosque (Quran learning) fees of Mehrullah’s son which amounts to 50 afghanis,” she stated.

Bibi Fatema’s husband died when Mehrullah was five years old. Since then, she has grown Mehrullah and three daughters. She raised her children single-handedly while struggling with extreme poverty.

Mehrullah was the only breadwinner of his family. His death left a four member family to extreme poverty. By offering tailoring service, his widow is trying to contribute to a living the family depends on to survive.

Figures provided by the Help for Afghan Heroes (H4AH), an Afghan non-profit charity for the wounded and dead Afghan soldiers and their families, suggest that more than 2,000 Afghan forces with disabilities and families of the fallen soldiers have not received remuneration for more than six months.

Haroon Haidari, executive director of the charity, told Kabul Now that the problems with the government’s finance and administrative system have caused postponement in payment of remunerations of the fallen and wounded Afghan soldiers. “Families of the martyred and the disabled are mostly [living] under poverty line. Most of them have not received their salaries,” he added.

The State Ministry for Martyrs and Disabled Affairs (SMMDA) says that the Ministry has faced a budget deficit to pay salaries of the fallen and wounded Afghan soldiers.

Nearly 11,000 Afghan forces were verified and registered as dead and more than 1,100 were verified and identified as wounded in 1399 fiscal year, says Ziaulhaq Fazli, spokesperson of the State Ministry. He added that they paid remunerations for the first half of the fiscal year to the wounded and fallen Afghan soldiers while their salaries for the last half of the year have not been paid. “We have asked the Ministry of Finance to include these unpaid salaries in the country’s annual national budget document for 1400 fiscal year.”

As per his account, the State Ministry needed 22 billion afghanis to pay remunerations of the wounded and fallen Afghan soldiers in the past fiscal year but the total budget allocated for this purpose amounted to 13.5 billion afghanis in that year. The Ministry of Finance has promised that it would transfer the remaining moneys to the families of the fallen and to the wounded soldiers, he noted.

Meanwhile, Fawad Aman, deputy spokesperson for the Ministry of Defense, says that the defense ministry is responsible to pay six-month salaries of the wounded and dead soldiers, not further. He, however, do not provide a specific figure about the number of Afghan army forces who were killed during 1399.

In an interview with the CNN, President Ghani, said that more than 40,000 Afghan military forces and civilians were killed since 2015.

This story has been developed by Etilaatroz’s Wajid Rouhani and translated by Mokhtar Yasa.