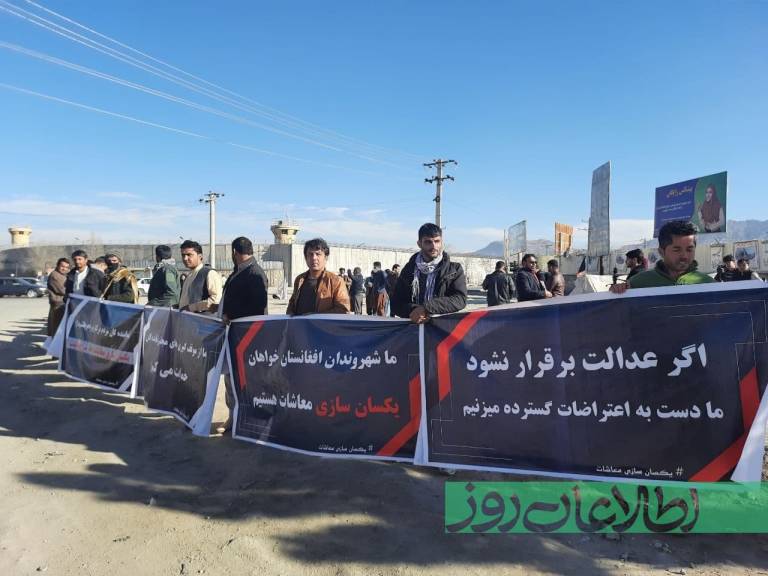 “Despite hardship they endure, teachers and soldiers receive the lowermost salaries. The purpose of today’s gathering is [to ask government] to increase salaries of low-ranking employees,” says Massoud, one of the protesters.

The protesters say they would continue to protest if their demands were not addressed. They call on MPs to stay united, support the plan, and make it work.

“Those present in today’s gathering are urging parliament not to approve the 1400-fiscal budget. Unequal salaries of employees is [a source of] corruption in government offices,” says Paiman Nezami, another protester, who previously served in a government organization.

According to him, many government employees are paid 6,000 afghanis per month while a large number of less-educated people, as he puts, have occupied high government posts. He urged the government leadership to pay attention to educated job-seeking youth.

The protest was held, while earlier on January 13, Mir Rahman Rahmani, the Speaker of Parliament, termed the plan of equalizing salaries of government workers as a red line for the lawmakers. He stressed that MPs would not approve the 1400 fiscal budget if the government did not approve the plan, fulfilling the call by teachers, soldiers, families of martyrs and retirees.

Among the protesters, there was a former Afghan soldier who was forced to leave his job after losing his right hand fingers in a mine explosion while he was on duty in 205 Military Corps in Kandahar. He was paid 12,000 afghanis per month, he says, underling that now as he is out of job, he has no source of earning to live on.

Angry over government inattention to condition of Afghan soldiers, he has joined the protest, demanding justice for Afghan soldiers. He said the Afghan soldiers fight in front line of battle fields in return for a monthly 12,000 afghanis.

Some protesters complained about what they call a systemic discrimination in government organizations.

Nafisa, who works with the Directorate of Public Health in Kabul, said that for the last 30 years, she has been working at health department in return for a monthly 6,000 afghanis. “There are annual evaluations based on which government workers are promoted or their salaries are increased. In this year’s evaluation, only 150 afghanis has been added to my salary. My home is far away and transportation fare is not paid to us. Has the government said that the transportation fees must be paid to a number of chosen employees and not to others?” she said.

Nafisa supports the plan of equalizing salaries of government workers, calling on MPs to support the plan and put into practice.

Nasrin Forotan works in a child-care house of government-run hospital. She protested against unfair payment in government organizations, saying that a specialist, who has worked and studied for many years, receives only 10,000 afghanis as monthly salary.

She takes care of her five children in return for 7,200 afghanis as her monthly salary.  “Justice and equalization of salaries are most government employees’ wishes. A number of high-rank officials aside from receiving 100,000 afghanis as their salaries, have a subsistence allowance and receive $1,000 for rent, while other employees receive 7,000 afghanis and no transportation fare. Where is justice?” says Nasrin.

In support of the proposal, she calls on lawmakers to defend the rights of low-ranking government employees.

The Afghan parliament rejected budget plan for second time. In reaction to lawmakers, President Ghani said as per the Constitution, drafting budget plan is responsibility of the executive body and the Parliament is entitled to either reject or approve it.

In response to President Ghani, Speaker Rahmani said that the Parliament will not allow anyone to take advantages from national budgetary. He accused the President of being ignorant and not knowing what the duty of the Parliament is.